Today more from Mali, after all it has one of the most intensely musical cultures in all Africa. Today's band was one of the first West African acts to combine this mature Afro-Latin sound with traditional instruments and styles. In their case, this was built upon the Mande Griot praise singer tradition, along with Bambara and other Malian and Guinean musical traditions. Their distinctive sound came from combining electric guitar and jazz horns with soaring Mandinka and Bamabara lyrical lines, African and western drums, and local instruments such as the kora and the Balafon. At their height of fame in the 1970s, they played to sold out venues and even stadia across West Africa, and launched solo careers for many of its members, including the legendary vocalist Salif Keita........N'joy

The Super Rail Band, or the Super Rail Band of the Buffet Hotel de la Gare, Bamako, to give them their full name, might be Mali's best-kept secret. Loved by world music cognoscenti, they've never found a general audience, due in large part to having only a few, poorly-distributed records. But as well as being an incubator for some of the country's great singing talent, they've also become an institution and a legend.

It all began in 1970, when Mali's Ministry of Information decided to sponsor a band in the country's capital, Bamako. Since Mali gained independence in the early '60s, the government had sponsored music to emphasize the local culture, but now it was cutting back on some of the programs, and this seemed a cheap alternative to the more ambitious plans. They had a venue -- the Buffet Hotel at the city's train station -- and with the musicians in place, the gigs became regular events.

The first lineup centered around guitarist Djelimady Tounkara, who remained a constant throughout the band's tenure, and original singer Salif Keita. The albino Keita, whose lineage was that of royal blood, was so embarrassed by his albino looks and to be doing a griot's work of singing at their first show, that he sang from the back of the stage with a towel over his head. The band worked in the Malian Manding tradition, with some touches of Congolese rumba, and became a smash, thanks to the mix of vocals and long workout instrumentals, where Tounkara quickly established himself as one of the continent's best axemen -- the equivalent of any Western guitar god. Keita quickly adjusted to being on display, and soon was one of the centerpieces of the band with his high, wailing voice, leaving two years later to start a rival group, Les Ambassadeurs du Motel.

He was replaced by another great voice, Mory Kante, who would go on to become a major solo star. The tenure of the first two vocalists was commemorated on Rail Band, where the none-too-hi fidelity recordings still managed to capture the energy of the ensemble on griot classics like "Soundiata." However, they essentially remained a live, local group, and it wasn't until 1985's New Dimensions in Rail Culture, on the Globestyle label, that they were properly recorded. By then the band had turned over personnel, with a new set of singers and players behind Tounkara.

As the popularity of world music increased in the late '80s and early '90s, the Rail Band became known by critics and lauded. But their music wasn't widely available, which meant that the general public never had much chance to become acquainted with their very sophisticated sound. A U.S. tour in 1990 helped somewhat, but with no follow-up and no new product, any momentum they had was lost. the Rail Band didn't return to the studio until 1994, releasing Djoungouya Magni on the French Indigo label, then releasing Mansa, also on Indigo, a year later. Mansa was by far the best recording they'd made, both sonically and musically, capturing the full range of their sound, from the griot epics to the funk they'd taken on board over the years, and even incorporating touches of jazz in the antiphonal phrasing between Tounkara's guitar and the horns. Since then they've toured in Europe, but released no more recordings, although Tounkara was the central figure in author Banning Eyre's book In Griot Time.


The Rail Band's leader was the great Tidiani Koné, an outstanding musician who was also a griot (a kind of religious leader/ influent personality), who decided to give his chance at this time to a young albino singer, Salif Keita, that would become world famous in the future.
A masterpiece with a heavy influence from the West of funky, use of stringed instruments, sax full of poetic sentiment of Dijiani Kone , a perfect combination! Remarkable as the initial recording of Keita. Recommended and funk tune "Numu-Nanthan" that - "Diolo Moko", a fragrance Ethiopian to Afro funk  It is one piece of frontier rare groove, with a transcendent, twinkling sound. 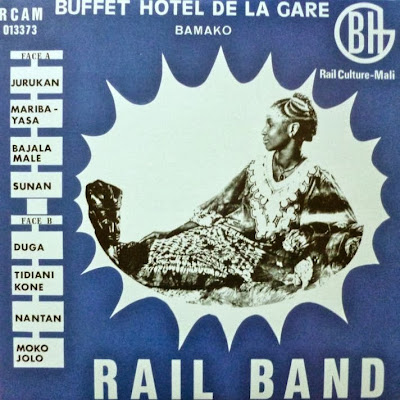 
3rd and final volume in the critically-acclaimed series that tells the 13-year story - from 1970 to 1983 - of Mali's legendary group. In 1970s Africa, the Rail Band was THE band against which all others were measured. Compiled by renowned producer Ibrahim Sylla and carefully remastered from the original tapes, these tracks range from impassioned epic guitar workouts to chugging afrobeat, jaunty adverts for skin cream and arrangements influenced by the Hindi Bollywood films that were so popular throughout Africa at the time. These albums feature seminal performances by such stars as Salif Keita, Mory Kante, Djelimady Tounkara & Djelimady Sissoko.

The styles on this album vay from traditional Manding music to Congolese rumba to a take on Afrobeat, Sinsimba. In my opinion , some of the best tracks are the rumba influenced tracks from 1983: Foliba, Talassa, and Bedianomogo. The horns lines as in the best rumba cut a beautiful melody across the complex rythm laid down below them. It is on these track that Djelimady Tounkara's guitar work really shines. While Franco, another amazing guitarist, always played within the confines of the rumba formula keeping his solos restrained, Tounkara's solo's absolutely dazzle as they play with the rhythm track beneath them, fluttering around then soaring above with Tounkara's amazingly fast appegios. 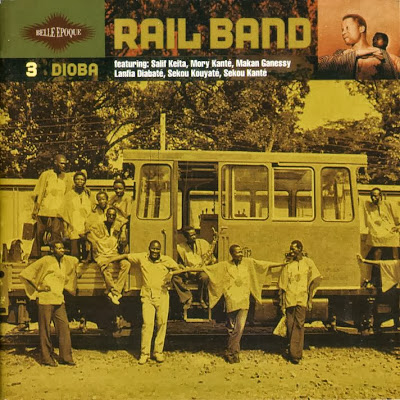 Mali's Super Rail Band are the stuff of African legend, certainly one of the most-revered groups ever to emerge from the continent, with guitarist and leader Djelimady Tounkara finally deified as one of the world's guitar heroes. It's a status he cements on Kongo Sigui, if only for his work on "Dakan," where he spirals the excitement higher and higher. But while he's the focus and famous name of the band, it's worth remembering that he's only one member of the group -- something he seems to understand more than his fans. And, as on most of their albums, they're a very electric outfit ("Sory" being the unplugged exception, where two guitars and some dizzying kora work interlace beautifully). With four singers -- two lead, two backing -- the voices offer potent power, which comes to the fore on the aching "Tunga," while the rhythm section offers a strong fluidity that still manages to leave plenty of space for all the musicians -- which they use well. There is, naturally, a pair of praise songs, "Sada Diallo" and "Balla Moussa Keita," and the Mande mood that's been the Rail Band's hallmark for over 30 years is still in full, positive effect. They may not release new albums too often, but when they do, they make it count. Like all their work, this is vital. 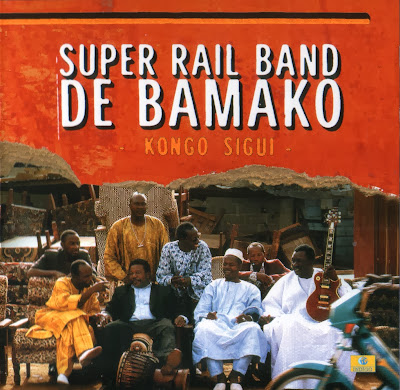 that kongo sigui album is lovely. thanks.

It would be great to have your re-ip of

I thank you in advance

Hello Rho!
Your last week's re-ups, great as usual, thanks a lot.
You started with an artist from Mali, let's continue with a malian band, several times I attended concerts of this.

Thank you in advance and best wishes
Thomas

Could you please reup the Rail Band albums? Thank you Rho!