Hello, The F1 could see it's new worldchampion today, however this is by no means a forgone conclusion, Vettel didn't take poleposition on account of a faulty Kers which costed him about 4/10th of a second, a bigger problem is his defacto ex team mate Webber, is on pole and as this is sort of a last chance, he will be hellbent on a win. Behind these Red Bulls I expect plenty of chaos and chrashes are to be expected.

Today's artists gauzy sound, by his own admission, was something of a happy accident, those sheets of shimmering guitars originally intended to disguise his modest technical skills. And his innovations went on to inspire a legion of imitators ranging from lazy shoegaze wannabes to the mighty My Bloody Valentine, though few ever improved upon his approach. That mysterious assemblage of patch chords and pedals at some point evolved from a sound to his sound, a sonic palette with a personality all its own .. ... N'Joy

The chief sound architect of Cocteau Twins, Robin Guthrie and his reverb-drenched guitar textures have had a significant impact on alternative music since the early '80s. Numerous acts have emulated his style, and several others -- including Felt, the Gun Club, the Veldt, Ian McCulloch, Lush, and The Wolfgang Press-- have enlisted his production skills. During his career Guthrie (born 4 January 1962) has played guitar, bass guitar, keyboards, drums and other musical instruments, in addition to programming, sampling and sound processing.

Following the break-up of the Cocteau Twins in 1998, Guthrie released his first solo record, Imperial, in 2003 on Bella Union Records. Guthrie's next release, which was co-written with Harold Budd, was the film score for Gregg Araki's Mysterious Skin. The soundtrack was released in May 2005 by Commotion and consists of 15 complete songs based on the short pieces used in the film.

Guthrie has also collaborated with singer Siobhan de Maré (formerly of Mono) as the band Violet Indiana. Their first full-length album, Roulette, was released in 2001. A second album, Russian Doll, followed in 2004. In March 2006 Guthrie reported on his weblog that the group had started work again on new material.

In 2006, Guthrie signed a four-album solo deal with Darla Records, the first product of which was the album Continental. He subsequently released two four-track EPs, Everlasting and Waiting for Dawn.Two more collaborations with Harold Budd (who had previously announced his musical retirement) were released simultaneously in 2007. After the Night Falls and Before the Day Breaks were both co-composed, co-produced and played with Budd. Like the soundtrack to Mysterious Skin, both albums are slow, drifting pieces primarily utilising treated guitar and piano.

A year later, he scored the Dany Saadia-directed film 3:19; the score was also issued on Darla. Yet another ambient album for Darla, Carousel, came in 2009, as well as the Angel Falls and Songs to Help My Children Sleep EPs and the full-length Mirrorball, a collaboration with John Foxx.

A further EP Sunflower Stories was released in March 2010, Guthrie's most recent releases are Emeralds (2011) and two collaboration albums with Harold Budd, Bordeaux and Winter Garden (with Eraldo Bernocchi) (both 2011). He played guitar on the Telefon Tel Aviv track "The Sky Is Black", from The Birds EP (2012). Guthrie released Fortune, his newest full length album on 26 November 2012.

Guthrie currently tours live under the name "The Robin Guthrie Trio" consisting of himself, Steve Wheeler (on bass) & Antti Mäkinen (on drums). He currently works and lives in France with his wife Florence, their daughter Violette, and Lucy Belle, his daughter with Elizabeth Fraser.

Well, Robin Guthrie manages to remind us that while Elisabeth Fraser's vocals were the most immediately memorable part of the band, his watery guitar work was no less integral. Here, on IMPERIAL, that guitar is isolated, drifting in the atmosphere like a lazy cloud. The title track grows subtly, like waves accumulating in strength. "Freefall," with a simple piano pattern underpinned by soft keyboard tones, is the closest anyone has come to making an alternate Twin Peaks theme; the title could hint that it was the artist's intention to do exactly that. A shell of a beat gives "Tera" some grounding for the otherwise ethereal melody, while "Drift" closes the album with an electric growl. Quietly beautiful. 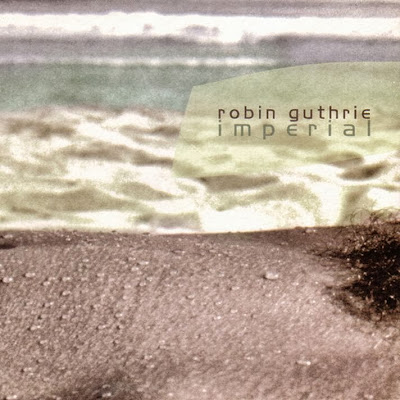 As long as Robin Guthrie is active, he's going to deal with one persistent issue. If he sounds like himself, he'll please a certain portion of his fans who want to be continually reminded of why they got into Cocteau Twins, while others will urge him to move on. It's the price he pays for shaping a specific sound that has been imitated by many. If he had started out sounding like a bunch of other bands, and continued to do something similar to that, album after album, he wouldn't catch nearly as much heat. Continental, his second solo album, is all-instrumental but not nearly as ambient as 2003's Imperial. Several tracks rise and crash with the help of programmed rhythms and leave enough room for the presence of vocals, while a couple others simply shift around and cascade. Unless you're a gear head and can tell exactly what was used to record this album, you might think it to be made of outtakes from recordings made in 1985 and 1986, when the Cocteaus released the Tiny Dynamine and Echoes in a Shallow Bay EPs, as well as the Victorialand album; the songs induce that peculiar mixture of isolation and ecstasy. In addition to fitting safely in the context of Guthrie's past work, the album also recalls the sandstorms of Scenic's Acquatica and the restful moments of Manual's Ascend, two albums that were undoubtedly informed in part by Guthrie's past. Depending on how much Robin Guthrie you want in your life, Continental is either redundant or another reason to love him. It's certainly a strong album.

As one half of the musical force behind dream-pop outfit Cocteau Twins, Robin Guthrie helped create heavenly soundscapes that were as haunting as they were lovely. Guthrie's fourth release, 2006's EVERLASTING, finds the producer/writer/guitarist continuing to explore the more atmospheric dimensions of pop music, as layered synths, chiming guitars, and lightly pulsing beats ebb and flow to wonderful effect. All four tracks on EVERLASTING are instrumentals, which occasionally makes one yearn for the angelic, off-kilter voice of Elizabeth Fraser, but at the same time shines the spotlight on Guthrie's conceptual prowess. 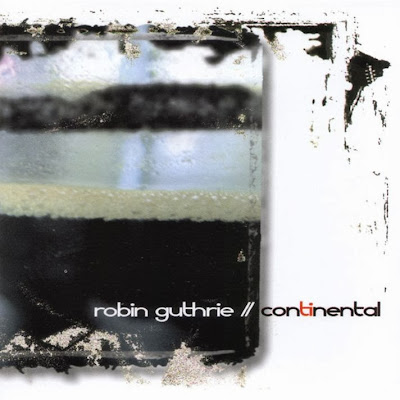 Carousel, Guthrie's first non-soundtrack solo album since 2006's Continental, sounds like one would expect a Robin Guthrie record to sound-- the man and his métier will forever be linked. Like Continental and much of Guthrie's post-Cocteaus work, the disc is instrumental, and like the best ambient music, its impact will vary. Play it quietly and Guthrie's soundscapes will come off pillow-soft; play it loudly and his compositions prove deceptively dense and not exactly prone to gaps and silence.

Thanks to all the reverberating effects, they don't take that many notes to fill up all the space, and in turn all but demand to recede into the background, like a fog rolling out rather than in. The dynamics of the disc are relatively steady, the melodies redoubtably pretty, the production mostly sanded of any vestigial rough edges or volcanic peaks. Yet playing in the background, the music is, thanks to its particular provenance, never anonymous, with Guthrie's carefully layered guitars as majestic as ever, rippling away like ancient tapestries given a fresh airing.

Ever-evocative songs such as "Sparkle", "Delight", or the particularly dramatic (and relatively oceanic) "Waiting by the Carousel", with each chiming note or sustained chord steeped in Guthrie's substantial history. If gorgeous tracks such as album closer "Little Big Fish" must come as easily to him as breathing, listening to Guthrie exercise his lungs today remains no less entrancing than it was decades ago. It's as if this music has been resonating somewhere in stasis that whole time and has only now been released to catch up with us. 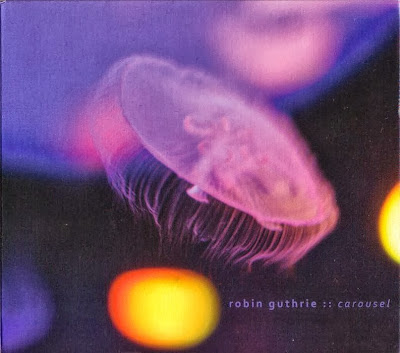 You are our "next blog" so please hop into ours for a look. :)

Can you upload Carousel again please ?

I wonder if you have Robin Guthrie's 'Emeralds', 'Bordeaux' or 'Fortune' albums? I would be most grateful if you were able to share.

hi rho, could you re-up all three once more please?thank you!!

I agree with Anon, a reup would be much appreciated, Rho.

Thanks for the reup!