These months Frenchies rule the beats and they have plenty to offer even though not that much reaches the world as  the music scene is rather dominated by the Anglo - American music industry. Meanwhile the French enjoyed themselves in their own niche so to speak, and they did rather well. Today's artists feature the cross prominently, hence gaining entry to the US market was much easier, and with a much media sampled track called Genesis the cynical as well as the believers can rejoice. Meanwhile the French way of catholic over the top pretence filled their coffers. Well you decide ....... N'joy

Justice (stylised as Jus†ice) is a French electronic music duo consisting of Gaspard Michel Andre Augé (born 21 May 1979 in Besançon, Doubs) and Xavier de Rosnay (born 2 July 1982 in Ozoir-la-Ferrière, Seine et Marne). Justice first produced tracks together for Musclorvision's "Hits Up to You", a concept compilation where tracks were designed to sound like they were meant for the Eurovision song contest. The compilation included two of their songs, and a track by Augé's alter-ego Microloisir. Justice first came to prominence through their 2003 remix of Simian's track "Never Be Alone", created for a Paris college radio station's remix contest. The remix resulted in the group being signed to Ed Banger (who released it) and became a hit in clubs and on the Internet.

After the original release of "We Are Your Friends" Justice worked on remixes for a number of French groups (Vicarious Bliss, Scenario Rock, and Gambit) as well as for larger mainstream acts such as Britney Spears, N*E*R*D, Fatboy Slim, and Daft Punk.[ Justice's first solo single, "Waters of Nazareth", was released on Ed Banger Records in September 2005 and was championed by DJs such as Erol Alkan, Eddy Temple-Morris, Tiga, 2 Many DJ's, and Ivan Smagghe. The track was re-released in 2006 with additional remixes. The duo's prolific remix work continued, as they turned in mixes for Franz Ferdinand, Mystery Jets, Soulwax, and Mr. Oizo.

Their debut album, titled †, was released on Ed Banger Records on 11 June 2007. The album was released in the United States on Downtown/Ed Banger. The album was preceded by the D.A.N.C.E. EP, released on 28 May 2007, which featured the tracks "Phantom" and their own remix of "D.A.N.C.E." titled "B.E.A.T". "D.A.N.C.E." was nominated for "Video of the Year" at the 2007 MTV Video Music Awards. Justice appeared as a Live PA at the 2007 Parklife and festivals around Australia, the 2008 Coachella festival; the 2007 and 2008 Sónar festival in Barcelona; Fuji Rock Festival in Niigata, Japan and basically all big festivals across Europe. Apart from the disco and funk influences of electro house, their style has some heavy metal influence. Justice combines cut-up basslines with compressed and distorted synth sounds.

In July 2008, Justice was revealed to have done a mix for the Dior Homme Summer 2009 Fashion Show, much like Daft Punk did for Louis Vuitton in 2007. The track, now known as Planisphere, was released in four parts on the band's MySpace page, with an extra final cut that did not make it into the fashion show mix (known as "Planisphere IV", or "Planisphere Final"). On 25 August 2008, the band announced via MySpace that their next major release would be a DVD documentary/concert film titled A Cross the Universe. The announcement was also tied in with an invitation for fans to e-mail photos, images and artwork to an address so that the received photos could be compiled for use as artwork for the release. An iconic scene in A Cross The Universe happens in Las Vegas, where, as a homage to Axl Rose, Gaspard marries a groupie whom he had met three hours previously.

On 28 March 2011, the Justice single, "Civilization" was released as a one week iTunes exclusive, in full, as a premier for the release of the single on 4 April. On the 27 May, the duo released the official music video for the single on YouTube. In August 2011, the band announced that their sophomore record, Audio, Video, Disco, would be released 24 October 2011.[36] In an interview with French magazine Tsugi, the duo disclosed the 11 song tracklist of the album, and described it as "a progressive rock record, played by guys that don't know how to play".

In March 2012, the band played mainstage at Ultra Music Festival in Miami, Florida. The duo played many of their hits from their critically acclaimed debut album †, as well as many of the new tracks off of Audio, Video, Disco. In April 2012, Justice was also a headlining act at Coachella Valley Music Festival in Indio, California. Justice headlined at Montreal's Osheaga on August 3, 2012 and Chicago's Lollapalooza on Sunday, August 5. Justice also played at San Francisco's Outside Lands Music Festival on Friday, August 10. In October 2012, the band played at Voodoo Experience in New Orleans, Louisiana. Justice completed their world tour of the live show on November 10, 2012 playing at One Festival in Mexico City, Mexico. On 7 May 2013, the band released their second live album, Access All Arenas, which was recorded at the Arena of Nîmes in France on 19 July 2012.

Before Justice first album release the boyz had been busy making a name for them selves, specially their version of Simian's Never Be Alone made a big splash. It opened many a door hence lot's of interesting remix requests, collected here together with their first singles/compilation entries. A must have for the fan but finding a hard copy won't be easy, but then we like it digital here.... 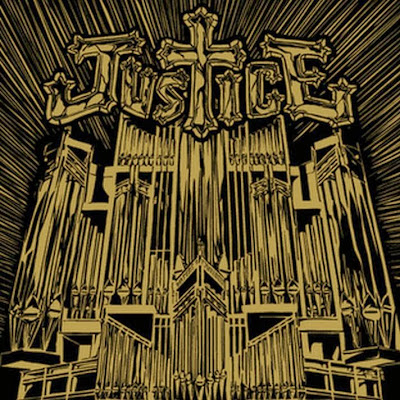 French boys Xavier de Rosnay and Gaspard Augé originally got their start in the music scene playing in bad Metallica and Nirvana cover bands, and the album art of Cross makes it look like a doomy metalcore release, but the record is anything but metal. In fact, it's almost everything but metal. It's a grimy mix of dancehall, techno, '80s R&B, and lounge with Clockwork Orange synths, deadly static crunches, hard-hitting kicks, grinding groans, and a spliced Off the Wall slap-popping bass. Scattered and chopped to all hell, the songs often feel revolutionary. This is partially due to the duo's "anything goes" attitude. It's as if Justice is reacting to complacency in latter-day electronic music and seeing how far they can take their slicing and dicing before the chopped up compositions fall apart. At certain moments, samples are dissected into such little snippets that it's hard to even decipher the instrument from the clicks and pops in-between the splices. Usually when the songs unravel to this point, they suddenly halt and get reeled back in to cohesion with the sudden snapback of a fishing lure that has been swept into the rapids. Instead of using their laptops to keep their beats tight and precise, Justice uses them to shake up their songs to such a gnarled, jittery point that they sometimes sound like mistakes. These happy accidents give the tunes a humanistic touch, like futuristic beats deconstructed by cavemen. While the instrumentals are often sinister and melancholy, as if they were concocted in a cold, cavernous atmosphere (which they were, in Rosnay's basement), the tracks with vocals are perfectly designed for a hot nightclub. "DVNO" has disco handclaps and bouncy vocals that could have been ripped from Oingo Boingo, "D.A.N.C.E." is tricked out with a Go! Team double-dutch flavor, and "Ththhee Ppaarrttyy" incorporates a cute-voiced rapper coaxing her friends to get "drunk and freaky fried" over a keyboard potentially lifted from Journey Through the Secret Life of Plants. At the darker end of the dance spectrum, "Stress" is an exhausting exercise in patience with a teapot whistle screaming over a tension-building Space Invaders type bassline, and "Waters of Nazareth" combines a crunchy church organ with a bottom-heavy synthesizer rolling in gravel. Admirably random samples dug up from underground sources like '70s Italian prog-rockers Goblin, combined with a reckless abandon and an adherence to melodic hooks, makes Cross one of the most interesting electro-crossovers since Ratatat, and the guys in Justice do an excellent job building on Daft Punk's innovative foundation. 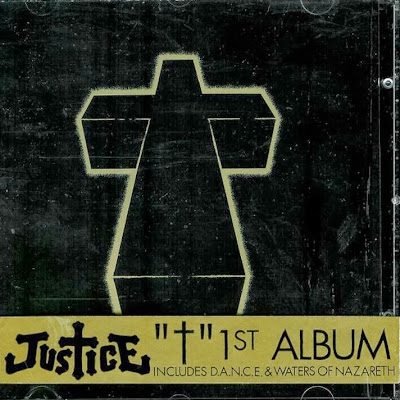 Designed to perpetuate their image as arena metal rock stars of the electro age, Justice's second release, A Cross the Universe, exposes the French duo's ability to whip a live audience to a frenzy by using a massive stack of Marshalls to amplify their laptops. The soundboard recording of their 2008 San Francisco performance, loaded with crowd noise, proves that you don't need a wealth of material, live instruments, or even microphones to put on an explosive show -- just an über-successful album with killer beats, a beast of a sound system, and a venue packed with people who like to D.A.N.C.E. Capitalizing on the critical and commercial acclaim of their debut, Cross, Gaspard and Xavier's set is almost completely made up of material from their 2007 release, and the only tracks left off the bill are "Newjack" and "Valentine." While this may sound like it's merely Cross with additional background screams, it's far from anything that conventional. Here, the pre-recorded sequences of fan favorites "DVNO," "Tthhee Ppaarrttyy," and "D.A.N.C.E." are born again, flipped and redecorated with aggressive house beats to the point that they feel fresh, but they still retain enough familiarity to get fists pumping and mouths singing along. Moods are brought to a peak as the parts build frenetically into strobe-like pulses, then die down into relieving ballads. 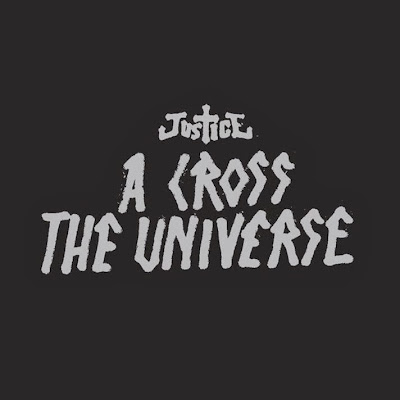 I have the A Cross The Universe release from Justice and it is an insane live set.

The ending where they mixed in Metalica was insane.

Can you reupload Justice - Ed Banger / Because Music Present Justice? Thanks!