Hello, well I hope you enjoyed the sunday, there was the worldchampions race for the pro cyclists. Sixteen seconds covered the first four home after seven and a half hours of the toughest race conditions imaginable. Almost two hours earlier the last of the british riders had been flushed out, apparently coming from a country with plenty of rain wasn't to their advantage but then lots of those hot shots mainly train in fine weather. No weather for skinny types, that said those first four didn't dispplay much fat either. Loser of the day, Nibali he should have won if not for the crash that had him loose his last oomph catching up to the leaders again, so two Spanish stars that really don't like eachother left to keep that young contender at bay, well they failed Rui Costa won and after winning the Tour de Suisse and two stages in the Tour de France earlier this year, he must be considered a worthy Worldchampion.

And now what awaits is is the final episode of Breaking Bad, a series that i have followed right from the start and it's been one hell of a ride (as it where). Tonight an anti-hero is about to fall, question is who will he take along. Apparently the shows creator, Vince Gillegan has produced several outcomes and no one knows which one will be broadcast, the others most likely will be available in an exclusive disc set...


The Beeb provides us with a great adaptation of Isaac Asimov's fifties classic SF masterpiece The Foundation Trilogy for decades now stories go round Hollywood would envision it, clearly this is not an easy thing. In an audioplay its our imagination that supports the experience, and now for the final push into the future ... NJoy 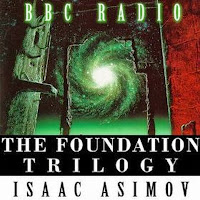 Isaac Asimov - The Foundation Trilogy ....
The premise of the series is that mathematician Hari Seldon spent his life developing a branch of mathematics known as psychohistory, a concept of mathematical sociology (analogous to mathematical physics). Using the laws of mass action, it can predict the future, but only on a large scale; it is error-prone on a small scale. It works on the principle that the behaviour of a mass of people is predictable if the quantity of this mass is very large (equal to the population of the galaxy, which has a population of quadrillions of humans, inhabiting millions of star systems). The larger the number, the more predictable is the future.

Using these techniques, Seldon foresees the imminent fall of the Galactic Empire, which encompasses the entire Milky Way, and a dark age lasting thirty thousand years before a second great empire arises. Seldon's psychohistory also foresees an alternative where the intermittent period will last only one thousand years. To ensure his vision of a second great Empire comes to fruition, Seldon creates two Foundations—small, secluded havens of all human knowledge—at "opposite ends of the galaxy".

The focus of the series is on the First Foundation and its attempts to overcome various obstacles during the formation and installation of the Second Empire, all the while being silently guided by the unknown specifics of The Seldon Plan. The series is best known for the Foundation Trilogy, which comprises the books Foundation, Foundation and Empire, and Second Foundation. Originally broadcast in 8 parts, between 6th May and 24th June 1973.

Isaac Asimov's The Foundation Trilogy was adapted for the BBC in eight hour-long episodes by Patrick Tull (episodes 1 to 4) and Mike Stott (episodes 5 to 8), directed by David Cain, first broadcast in 1973, and repeated in 1977 and 2002.

Sixty years later a teenage girl is at the centre of the Foundation's renewed search for the Second Foundation.

Thank you for taking the time to share this