Hello,  as the UK considers themselves outsiders for the World title now, they can thank Lewandowski for missing chances he usually puts away when playing for Dortmund. Pity, would have loved to have seen a dramatic play off with Iceland. But hey they are cup players so who knows. Meanwhile the US is still arguing amongst themselves that is as long as the Tea Party dictates the rest of the Republicans on how to vote, or maybe moderate Republicans are non existant these days. But negotiating with someone hellbent in bringing the government down at all cost is impossible. Question is at what price, it may become impossible to attack each country refusing dollars, after all the dollar could become a hot potato very quickly and with so many creditors a crash would be a global crash without shoestrings.

As we continue the females in the eighties today, today time for rock chics one who started the move and a band that lead out the eighties with would be heard as grunge.. .....N'Joy

By playing pure and simple rock & roll without making an explicit issue of her gender, Joan Jett became a figurehead for several generations of female rockers. Jett's brand of rock & roll is loud and stripped-down, yet with overpowering hooks -- a combination of the Stones' tough, sinewy image and beat, AC/DC chords, and glam rock hooks. As the numerous covers she has recorded show, she adheres both to rock tradition and breaks with it -- she plays classic three-chord rock & roll, yet she also loves the trashy elements (in particular, Gary Glitter) of it as well, and she plays with a defiant sneer. From her first band, the Runaways, through her hit-making days in the '80s with the Blackhearts right until her unexpected revival in the '90s, she hasn't changed her music, yet she's kept her quality control high, making one classic single ("I Love Rock 'n Roll") along the way.

Jett was born in Philadelphia, Pennsylvania; her family moved to Los Angeles when she was 12 years old. By the time she was 15, she had formed her first band and was performing around town. Kim Fowley, a Los Angeles record producer, discovered the band at one of their gigs and became their manager; soon, he renamed the all-female group the Runaways and secured them a contract with Mercury Records. The band released three albums that never had much commercial success in America, yet were very popular in Japan; the group was popular in both the Los Angeles hard rock and punk scenes, which led to Jett's production of the Germs' first record, (GI). the Runaways group broke up in 1980 and Jett moved to New York to begin a solo career.

Teaming up with producer/manager Kenny Laguna, Jett independently released her self-titled debut album in 1980 in America, since no labels were interested in signing her. The record was a more traditional rock & roll record than the punky Runaways, yet it retained her previous band's defiant attitude. The record sold very well for an independent release, leading to a contract with Boardwalk Records, who reissued the album under the title Bad Reputation; it soon climbed to number 51 on the American charts.

Jett formed the Blackhearts between Bad Reputation and her second album, 1981's I Love Rock-n-Roll; the group included guitarist Ricky Byrd, bassist Gary Ryan, and drummer Lee Crystal. Released at the end of 1981, I Love Rock-n-Roll became her greatest success, sending her into the Top Ten. Originally the B-side of an Arrows single, the title track was an enormous success, spending seven weeks at number one in the spring of 1982. The follow-up single, a version of Tommy James & the Shondells' "Crimson and Clover," went Top Ten as well; a single of Gary Glitter's "Do You Wanna Touch Me (Oh Yeah)," taken from the Bad Reputation album, reached number 20 in the summer of 1982. Album, released in 1983, went gold yet had no hits that compared with either "I Love Rock 'n Roll" or "Crimson and Clover."

Jett starred in Paul Schrader's 1987 film Light of Day, which featured the Top 40 title song, yet she didn't have another Top Ten hit until 1988, when "I Hate Myself for Loving You," taken from the Up Your Alley album, hit number eight; the album became her second platinum record. After the album's success, her career had another slow period, with 1990's all-covers album The Hit List making it to number 36 and 1991's Notorious failing to chart. Between Notorious and 1994's Pure and Simple, a new generation of female rockers came of age and everyone from hard alternative rockers like L7 to the minimalist riot grrrl punk rockers like Bikini Kill claimed Jett and the Runaways as an influence. As a consequence, Pure and Simple received more press and positive reviews than any of her albums since the mid-'80s.

In 1995, Jett recorded the live album Evilstig with the remaining members of the Gits, a Seattle punk rock band whose lead singer, Mia Zapata, was raped and murdered in 1993. Jett reunited with the Blackhearts for the 1999 album Fetish, and in 2006 Sinner, a return to her punk roots (and ten of whose 14 songs were found on the 2004 Japanese-only record Naked), came out. The next few years were spent touring with spots on the Warped Tour and as an opening act for bands like Alice Cooper, Aerosmith, and Green Day. When Jett returned with a new album, it was with touring guitarist Dougie Needles, longtime drummer Thommy Price, and even longer-time associate Kenny Laguna all on board. 2013's Unvarnished represented a stunning return to the form of the early days of the Blackhearts and featured a song produced and co-written with Dave Grohl.

Joan Jett's debut album is an infectious romp through her influences, ranging from classic '50s and '60s rock & roll through glam rock, three-chord loud'n'fast Ramones punk, and poppier new wave guitar rock. Half the songs on the original album (not counting bonus tracks on the remastered reissue) are covers, but whether it's Lesley Gore's feminist girl-group anthem "You Don't Own Me" (featuring the Sex Pistols' Steve Jones and Paul Cook) or a roaring version of Gary Glitter's "Do You Wanna Touch Me (Oh Yeah)," Jett makes them all work. The production can be a little weak in spots, but Jett's exuberance and tough-girl attitude overcome most deficiencies. Plus, the title track is a classic. 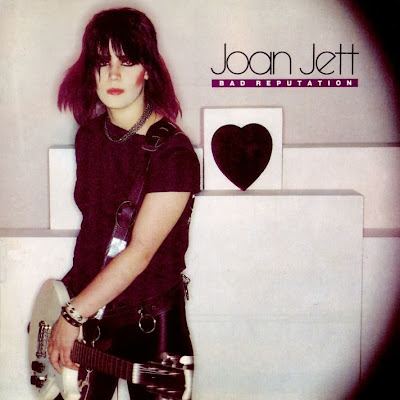 I Love Rock-n-Roll, Joan Jett's first record with the Blackhearts, was a tougher, louder album than Bad Reputation, primarily because her new backing band gave her a more coherent sound. That dynamic, hard rock crunch is what made the title track into an international hit, but it also gives the album dimension -- not only can Jett & the Blackhearts tear up heavy glam rockers, but they also pull off the mock psychedelia of Tommy James & the Shondells' "Crimson and Clover" with aplomb. On the whole, I Love Rock-n-Roll doesn't have as many strong songs as its predecessor, but the band's muscular, gritty sound makes the album just as good as Bad Reputation 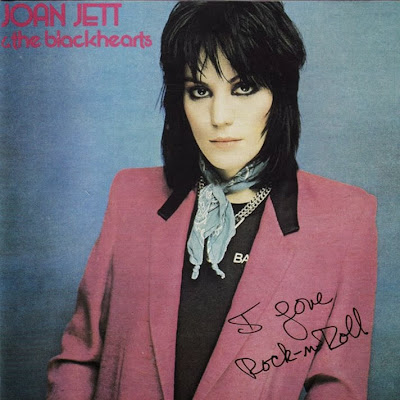 Although often lumped in with the "Seattle Movement" of the early '90s (due to their sound, look, and attitude), the all-female punk band L7 hailed originally from Los Angeles. The seeds for L7 (whose name was taken from a slang term in the '50s that meant someone who was a "square") were planted in 1985, when a pair of guitarists/singers, Suzi Gardner and Donita Sparks, decided to start a band. Over the next few years, the group extended its lineup to include bassist Jennifer Finch and drummer Dee Plakas, as their sound grew more and more metallic, yet never losing the attack and simplicity of punk. 1988 saw the group signed by the Epitaph label, which issued their self-titled debut the same year and the group spent the better part of the next few years touring the world. L7 issued Smell the Magic for the Sub Pop label in 1990, and later formed the Rock for Choice non-profit organization. Raising money and awareness for pro-rights, the organization put on several benefit shows over the years, featuring such noted performers as Nirvana, Hole, Pearl Jam, and Neil Young, among others.

With Nirvana finally bringing punk to the mainstream, bands such as L7 suddenly became "en vogue" as the quartet was signed to Slash/Reprise, issuing their best-known album with the Butch Vig-produced Bricks Are Heavy in April of 1992 (which spawned the popular MTV hit "Pretend We're Dead"). L7's follow-up, 1994's Hungry for Stink, failed to expand the group's following despite being part of the 1994 version of the traveling U.S. alt rock festival Lollapalooza. Bassist Finch left the group shortly thereafter (eventually replaced by former Belly bassist Gail Greenwood) and the group issued such further releases as 1997's The Beauty Process: Triple Platinum, 1998's Live: Omaha to Osaka, and 1999's Slap-Happy, while the group was also the subject of a 1998 concert film made by former Nirvana bassist Krist Novoselic, also titled The Beauty Process. In 2000, a 12-track retrospective collection was issued, Best of L7: The Slash Years.

L7's eponymous debut finds the band just beginning to get their sea legs; their trademark grungy fusion of punk and metal isn't quite fully formed yet, often skewing heavily toward one side of the equation or the other. That can sometimes give the album a schizophrenic feel; one minute they're sneering punk goddesses, the next they're offering hard-partying odes to rock & roll that could have been ripped from a Runaways record. But even if L7 doesn't quite jell into a cohesive album, visceral moments like opener "Bite the Wax Tadpole" (the Chinese translation of Coca Cola) make it worth investigating by devoted fans of the band's sludgy grind. 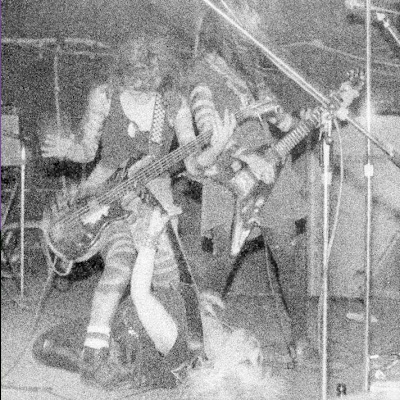 On 1991's Smell the Magic, L7 begins to find the sense of melody to complement its distorted punk guitar assault. The band deserves ultimate praise for writing from a completely female perspective at all times, and the fabulous "Fast and Frightening" just might be the ultimate "riot grrrl" anthem. "Shove" pleads the case for mosh pit etiquette, while "Just Like Me" demands equal rights (and vices) for male and female rock stars. The self-mocking "Broomstick" celebrates any "rock & roll hags" accusations with a sense of humor. "'Till the Wheels Fall Off" is another standout, thanks to its relentless descending riff, and points the way toward the band's breakthrough album, Bricks Are Heavy. 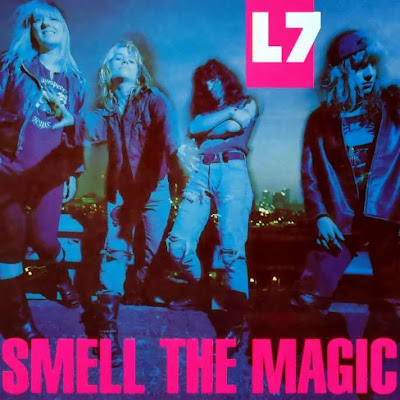 L7 "L7" flac is broken. Can it already have been taken down? O_o

Not sure what happened there, anyway i re-upped elsewhere...N'Joy

Thankyou v v much. Saw these gals many, many times at the height of their shambolic powers -- they were very good.

Shame about that blue angel post. I was in some dumb music marketing course back in the day, and some one came in to speak and handed out copies of that album. I haven't heard it since, but iirc it was a shiny, polished set of noo wave that borrowed heavily from 50's rnr, with touches of early 60's girl groups and (might be imagining) doo wop. Wouldn't mind hearing it again. Alas.

Hello Johnny, nothing is lost N'Joy

thx again, it's like early xmas. i meant to say before, solidfiles is a nice experience, never heard of them before.

Hey it's better than I remembered... guess I wasn't into pop flavours back then... more broadminded now (I like to think.) Cheers, mate.