Today more from Mali, after all it has one of the most intensely musical cultures in all Africa. Today's artist   " ... Never really breaks into a sweat, in fact barely shifting his gentle grin for a moment, he will break out these terrifyingly complex solos somehow conjuring notes from God knows where. The ngoni he plays only has three strings, how he does what he does remains a total mystery." "Kouyate" translates (more or less) "There's only one like you!" and here today we've got two of them, yeh! ......N'joy

Bassekou Kouyaté is seen as the world's best n'goni player. He was born in Garana, Barouéli Cercle, 60 kilometres from Ségou in 1966. He grew up in a traditional family of musicians, his mother Yagaré Damba was a praise singer, his father Moustapha Kouyaté and his brothers were n'goni players. When he was 12 years old, he was already mastering the n'goni lute, and in 1979, when his father was ill, Bassekou accompanied his mother on n'goni during her tour in Côte d'Ivoire and Burkina Faso. From 1983, he worked with Nainy Diabaté's husband and guitar player Cheick Oumar Diabaté. Together, they accompanied, besides Nainy, also other singers such as Tata Bambo Kouyaté.  In the late 80's he moved to the capital Bamako, he met Toumani Diabaté with whom he recorded on two albums and toured extensively in West Africa.

After a Banjo Festival in Tenessee, Bassekou got acquainted with Taj Mahal with whom he recorded together. His name was rising and increasingly he is invited to play with numerous artists, in Mali, for instance with Keletigui Diabaté, Ali Farka Touré, Cheick Tidiane Seck, but also on an international level: Bassekou has played and/or recorded with Carlos Santana, Jackson Brown, Bonnie Raitt...

In 2003, he created his own group, Samagéra, together with his wife Amy Sacko, balafon player Lassana Diabaté, Adama Diarra (djembé) and Fousseyni Kouyaté (bass n'goni). He performed in Holland and Belgium in 2005. With his current band, renamed into Ngoni ba, he recorded a long awaited first album, « Segu Blue », out in March 2007. The album features guest musicians Zoumana Tereta, Lobi Traoré and Kassemady Diabaté and is already a classic.

The follow up, the 2009 « I Speak Fula », was nominated for a Grammy Award and in 2013 he released a new album, Jama Ko,  recorded in March 2012, just when the military putsch took place in Mali, an event which was the beginning of a period of crisis in the country, Jama ko (‘big gathering of people’) is a call for unity, peace and tolerance in a time of crisis.. The political situation gives the album a sense of urgency that was felt. On the album he is accompanied by his two sons Madou and Moustafa Kouyaté, and with featurings by Khaira Arby, Zoumana Tereta and Taj Mahal.

Kouyaté's wife, Amy Sacko, is also a successful solo artist and sings lead in his band. Earlier this year Kouyate, together with wife Sacko and Ngoni Ba, appeared at The 2013 Proms.

The West African lute called the ngoni is a little akin to its descendent, the banjo. In music from the region, it is often employed as part of groups with additional instrumentation. Bassekou Kouyate, who's worked with many Malian greats, takes it out of this context by leading a band with no less than four ngonis and producing some of the loveliest music to come from the area in recent years. Some of it is quite dramatic, like the opener, "Tabali Te," but for the most part there is a gorgeous, lulling gentility to everything. The material is all original, but with a traditional spirit and with much derived from the repertoire of the griots. The big exception is "Lament for Ali Farka," an elegy to Kouyate's late employer, the great Malian guitarist Ali Farka Touré. Another local guitar player, Lobi Traoré, is featured on "Banani," and singer Zoumana Tereta is a guest on several cuts, showing off a very impressive voice. Put it all together and you have a disc that's nothing short of stunning. 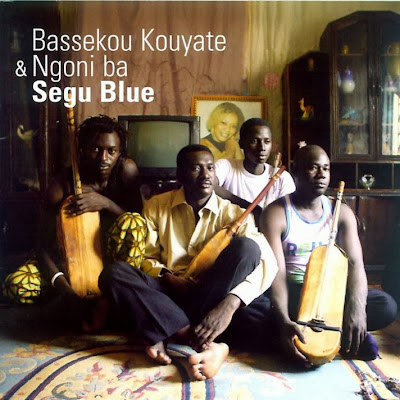 The ngoni, a four- or seven-stringed lute, is transformed by Kouyate's techniques. He has added strings, introduced new picking techniques and is unafraid to break out a wah pedal with surprisingly noisy results.

Drawing from Bamana folklore, Kouyate and his band Ngoni Ba supercharge their rhythms: even with a calabash as the main percussive force, theirs is a deep and commanding groove. The disc is even more irresistible thanks to the contributions of fellow experimentalists Toumani Diabate on kora, and Vieux Farka Toure on guitar, who both produce spellbinding melodic statements.

Though Kouyate is a griot (oral historian/musician), his unconventional approach pleases older generations. "In fact, I've never heard criticism or any reaction that was less than positive about these innovations!" he exclaims. "The old griots, guardians of the ngoni musical tradition, have congratulated me for bringing attention to this music, which was starting to die out." Kouyate is excited by the giant step up in exposure this new album represents: "I Speak Fula was a huge challenge, and I definitely felt it. But we're all professionals who have played this music since childhood, so the challenge was also a pleasure. I look forward to meeting open-minded audiences who have a real taste for African music." 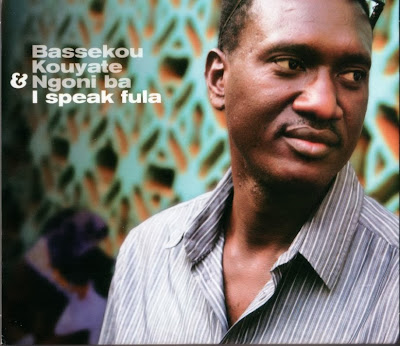 Affectionately known as "President", Diely Moussa Kouyaté prefers his claim to being a "Griot", and as longtime guitarist for Salif Keita he steps out for his scond vibrant solo album.

Belonging to the cast of troubadours and story-tellers from the Mandingo region Senegal, Gambia, Guinea, Burkina, Mali, parts of the Ivory Coast, Ghana, Liberia and Sierra Leone, (in other words the former Mali empire), a cast who were the heirs to the collective memory, and who shared a single mission: going from village to village, and spreading the idealised, romanced story of the thousand and one exploits of their masters, who were nobles, princes and warriors."I come from the great Kouyaté family from Kouroussa in Guinea. For eighty generations we have represented the most famous Griot dynasty in the entire Mande region. Oral traditions and music are overflowing in our daily life. My father, Sidiki Kouyaté, and my mother, Kankou Kouyaté, contributed to the foundation of the Mali Instrumental Ensemble."

"I came to music naturally, I didn't have to chase it. It's been in my veins since I was conceived. When I was 16 I decided to make it my career." Diely, who had already mastered the sitar and the balafon, took up the guitar. He was extremely gifted, and had been born with an astounding ear; he rapidly became one of the finest musicians in western Africa, and was sought-after for his unique propensity in reproducing a huge number of disparate sounds on his instrument. His technique was amazing, and he had an extraordinary gift for rhythm: he could align triplets and sevenths so quickly that they gave him a second nickname, the "Mandingo pressure-cooker".

Guitarist Diely Moussa Kouyaté began his career at Bamako, Mali, first with the 'Messagers' of Madane Sanaké (1969-1972), and then with the great singer Kassé Mady Diabaté (1972-73). For the next seven years he set fire to the rhythm section of the Bamako Rail Band, which used to be the star-attraction at the 'Hotel de la Gare' (in those days, each hotel in the Mali capital had its own house-band).

From 1987 to 1989, Diely Moussa lived in Abidjan in the Ivory Coast, playing in the group of his friend Babadjan Kaba and participating in dozens of recordings with his brothers Diely Mory Kouyaté (called the "old man"), Motou Kouyaté and Fodé Djiguiba Kouyaté.

In 1988 he landed in Paris. The occasion was a studio recording with Nahawa Doumbia (for Africando Productions, a pan-African/salsa collective). His incomparable mastery of Mandingo rhythms subjugated everyone who heard him, and word-of-mouth soon led to offers from studios around Paris, producers such as Camara Kall, and many other artists. So much so that he decided to settle in the French capital. His first record, "Kankou Moussa", was released in 1994. Produced by Diapy Diawara for Bokibana Productions, it was a traditional recording and as such, it had great success in the specialist sector. In 1999, Diely, who also accompanied (at last) Mory Kanté on record for several years, inherited the official title (a heavy role and none the less honourable for it) of "rhythm guitarist" (the real pivot of the orchestra) with Salif Keita.

Recorded in ten days at the 'Studios de la Seine', Sebe Ayale in 2002 his first solo record is jubilant and festive, and was conceived as an anthology of the multiple talents of Diely Moussa Kouyaté - skilled composer, inspired arranger, accomplished instrumentalist, modernist steeped in tradition, first-rate swing-artist and such a glorious promoter of groove.... Sebe Ayale is a multicoloured, powerfully federative album that can only make today's morals more beautiful. They sorely need it.

There was a sizeable gap before his second album, Le Temps arrived, as he toured relentlessly around the world, also recording with many artists. This all took much of Kouyaté’s time before he was able to compose and record new songs. This is where we can find his ‘goodfellas’ – those of Salif Keita, Kante Manfila, Kemo Kouyaté, Abdoulaye Diabaté, Amadou Sodia, Mamani Keita, Manian Demba, Ousmane Kouyaté, Ibrahim Somano. 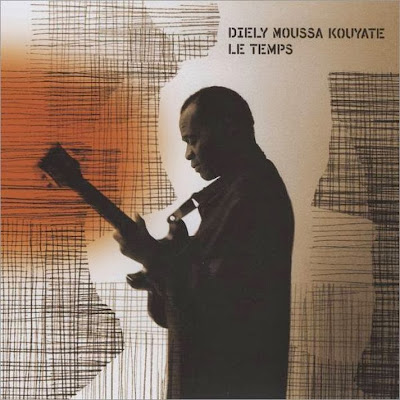 btw: will you hopefully take on kip hanrahan some day?

Hello Anon, not sure what is going on at deposit tech problems if you ask me anyway posted it at hugefiles now.

As for Kip Hanrahan- not really rootsmusic now is it- maybe a sundaze post one day.