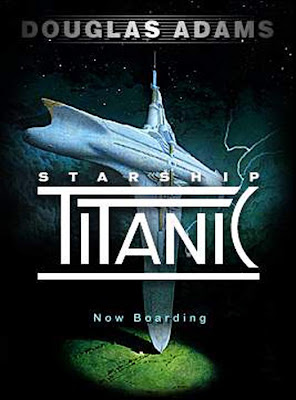 Hello, today i conclude the Starship Titanic Tale adapted and brought to you by Terry Jones (Monty Python), ive speeded up delivery with the final 4 parts coming up. As it happens cant wait to bring you another series starting next week. ........

A classic adventure game from Douglas Adams, creator of the Hitchhiker's Guide to the Galaxy.
At the heart of our Galaxy, an advanced civilization of which we know nothing has built the biggest, most beautiful starship ever, the Starship Titanic. Majestic and luxurious, its interior resembles a mixture of the Ritz, the Chrysler building, Tutankhamen's tomb and Venice. Starship Titanic is a technological marvel. And it cannot possibly go wrong. In theory....Seconds into its maiden voyage it crashes into hyperspace, vanishes...… and collides with your house.

Bewildered, you find your way aboard, and just as you are gazing at its awe-inspiring interior, the ship takes off again and heads deep into space. You are stranded. But you are not alone...
The ship is inhabited by a crew of malfunctioning robots and a semi-deranged parrot. You discover that you can communicate with them, a feat that is made possible by SpookiTalk, the game's proprietary interactive language engine. You can chat with any of the robot characters, like Fentible the distinguished Doorbot, Nobby the hypochondriac Liftbot, or Fortillian Bantoburn O' Perfluous the outrageously convivial Barbot. Talk to them. Interrogate them. Give them orders. They will listen to you, answer you and, if they happen to feel like it, obey you. Sometimes.

To begin with, you are a third class passenger, and you quickly find yourself in the grip of one of the most powerful forces known to modern man, the desire for a free upgrade. As you move up to second and at last to first class, more and more of the ship becomes accessible to you, and more and more of its mystery unravels. What has happened here? What terrible events occurred the night before the launch? Who is the mysterious Titania whose brooding statues dominate the ship? Can you solve a series of increasingly bizarre and surreal puzzles, unlock the central mystery and return to Earth before the parrot drives you finally and irrevocably mad?

All original interactive characters and game design by Douglas Adams

Thanks for the re-up. Much appreciated. Apologies for my recalcitrant behaviour. I will try to do better in the future.

Thanks! Looking forward to hearing this. BUT, the game link is broken!

[also, as said re the game link being down, sadly]

Why don't you try again Anon, I just re-upped the game to 1fichier.com