Last week the second series of Game of Thrones started on HBO below your chance once more to read into the series.

The coming weeks i will present you with comedy drama of the highest quality from the guys who did Shaun of the Dead. Spaced is a British television sitcom written by and starring Simon Pegg and Jessica Stevenson, and directed by Edgar Wright. It is noted for its rapid-fire editing, frequent pop culture references and jokes, eclectic music, and displays of surrealism and non-sequitur humour. Two series of seven episodes each were broadcast in 1999 and 2001 on Channel 4

The show has a distinctive cinematic style set by Wright and is shot with a single camera. In addition to borrowing liberally from the visual language of film (in particular genre films), it has particular stylistic mannerisms, such as the recurring device of scene changes occurring in the middle of a pan. The series' atmosphere is also established by the use of a particular flavour of contemporary dance music on its soundtrack.

Tim Bisley (Pegg) and Daisy Steiner (Stevenson) are two London twenty-somethings who meet by chance in a café while both are flat-hunting. Despite barely knowing each other, they conspire to pose as a young professional couple in order to meet the requisites of an advertisement for a relatively cheap flat in the distinctive building at 23 Meteor Street, Tufnell Park, which is owned by and also houses the landlady, Marsha Klein (Julia Deakin). Also in the building is Brian Topp (Mark Heap), an eccentric conceptual artist who lives and works on his various pieces in the ground floor flat. Frequent visitors are Daisy's best friend, Twist Morgan (Katy Carmichael) and Tim's best friend, Mike Watt (Nick Frost). 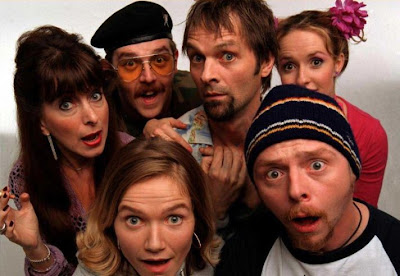 
A Song of Ice and Fire is an ongoing series of epic fantasy novels by American novelist and screenwriter George R. R. Martin. Martin began writing the series in 1991 and published the first volume in 1996. Originally planned as a trilogy, the series now consists of five published volumes; a further two are planned. In addition, there are three prequel novellas currently available, with several more being planned, and a series of novella-length excerpts from the main Ice and Fire novels.

The story of A Song of Ice and Fire takes place in a fictional world, primarily on a continent called Westeros but also on a large landmass to the east, known as Essos. The series is told in the third-person through the eyes of a number of point of view characters, 31 by the end of the fifth book.

To celebrate the start of the second tv series on HBO today another chance to delve into this glorious tale from a world with magic in stead of religious strife.