Hello, sadly the guys that formed the dark ambient duo , Coil, are no longer with us. Interestingly over the years they amassed a considerable cult following and today, Coil remains one of the most influential and best known industrial music groups

Coil was formed in 1982 following Balance and Christopherson's departure from Psychic TV. Balance and Christopherson began working with John Gosling on the project Zos Kia, which resulted in four live performances and the 1984 cassette tape Transparent. Following Gosling's departure Balance and Christopherson teamed up with Boyd Rice, and under the alias Sickness of Snakes released the split album Nightmare Culture with the experimental group Current 93. While working on their first official release, 1984's 12" How to Destroy Angels, the group settled on the name Coil. According to the sleeve notes, the single track LP is "ritual music for the accumulation of male sexual energy" and was produced under a variety of technological, spiritual, and meteorological conditions which the band felt to be magickally significant.

Since its initial release How to Destroy Angels has been remixed by Nurse with Wound's Steven Stapleton and released on a full length CD. Following the underground hit How to Destroy Angels, Coil left L.A.Y.L.A.H. Antirecords for Some Bizzare and produced Scatology, released in 1984 as their first full length studio album. The album was largely based on the sound of industrial music as well as the Post-punk movement. The single Panic/Tainted Love became the first AIDS benefit music release.  The "Tainted Love" music video, directed by Peter Christopherson, is on permanent display at The Museum of Modern Art in New York.

Horse Rotorvator followed in 1986 as the next full length release. The album is characterized by slower tempos, and represented a new direction for the group, aswellas a darker theme than previous releases. After the release left Some Bizarre Records, due to the record company's debt of GB£10,000 to the group.Gold Is the Metal with the Broadest Shoulders followed as a full length release, marking the beginning of the label Threshold House. Love's Secret Domain ( LSD) followed in 1991, it represents a progression in their style and became a template for what would be representative of newer waves of post-industrial music, blended with their own style of acid house.

Coil separated their works into many side projects, publishing music under different names and a variety of styles. The pre-Coil aliases, Zos Kia and Sickness of Snakes, formed the foundation of a style that would evolve to characterize their initial wave of releases. Coil's wave of side projects represent a sort of primordial soup from which the group evolved a different style of sound. While Nasa Arab—credited to the group's project "The Eskaton"—was Coil's farewell to the acid house genre, the following projects, ELpH, Black Light District, and Time Machines, were all based heavily on experimentation with drone, an ingredient which would define Coil's following work. These releases also kicked off the start of Coil's new label Eskaton.

After the wave of experimental side projects, Coil's sound was completely redefined. Before releasing new material, the group released the compilations Unnatural History II, Windowpane & The Snow and Unnatural History III. In March 1998, Coil began to release a series of four singles which were timed to coincide with the equinox and solstices of that year. The singles are characterized by slow, drone-like instrumental rhythms, and electronic or orchestral instrumentation.

Astral Disaster was created with the assistance from new band member Thighpaulsandra and released in January 1999 via Sun Dial member Gary Ramon's label Prescription.[15] Although the album was initially limited to just 99 copies, it would later be re-released in substantially different form. Musick To Play In The Dark Vol. 1 followed in September 1999 and a few months later Coil performed their first concert in 16 years. Queens Of The Circulating Library followed in April 2000, with production credit given to Thighpaulsandra.

Coil's live incarnation has a distinct legacy of its own. The first live shows took place in 1983, but after only four performances, sixteen years would pass before they would play live again. Coil's performances were surrealistic visually and audibly. Balance, Christopherson, Thighpaulsandra and Ossian Brown were known to dress in fluffy suits; an idea inspired by Sun Ra. The suits would later be used as album covers for the release Live One; Live Two and Live Three .
Many Coil performances were released, including the widely available releases of Live Four, Live Three, Live Two, Live One and ...And The Ambulance Died In His Arms, as well as several very limited editions such as Selvaggina, Go Back Into The Woods and Megalithomania!.

Coil incorporated many exotic and rare instruments into their recordings and performances. The group expressed particular interest in modular synthesizers, including the Moog synthesizer.they are among the few artists who have been granted permission to use the one-of-a-kind experimental ANS photoelectronic synthesizer. Other instruments the group incorporated into their music included the theremin and electronic shakuhachi.

John Balance died on 13 November 2004 after having fallen from a second floor landing in his home. Peter Christopherson announced Balance's death on the Threshold House website and provided details surrounding the tragedy. Balance's memorial service was held near Bristol on November 23 and was attended by approximately 100 people.  Following Jhonn Balance's  death Peter Christopherson announced via their official record label website Threshold House that Coil as an entity had ceased to exist. The already-planned live album ...And The Ambulance Died In His Arms was released in April 2005, the name having been chosen by Balance before his death.

The final studio album, The Ape of Naples, saw release on 2 December 2005. In August 2006 the rare CD-R releases The Remote Viewer and Black Antlers were "sympathetically remastered" and expanded into two disc versions, which included new and recently remixed material. A comprehensive 16-DVD boxset, titled Colour Sound Oblivion was released in July 2010. A "Patron Edition" was pre-orderable in November 2009 and was sold out in three hours. Christopherson had also discussed the possibility of releasing Coil's entire back catalogue on a single Blu-ray disc. Unexpectedly, and six years after his Coil partner, Peter Christopherson died in his sleep on November 24, 2010 at the age of 55.

Coil's distribution and marketing techniques sometimes included releasing a limited number of albums making them collectors' items among devotees. Including things such as "art objects", blood stains and sigil-like autographs in the packaging of their albums, Coil claimed that this made their work more personal for true fans, turning their records into something akin to occult artifacts. This practice was markedly increased in the later half of Coil's career. However, Balance expressed interest in having regular Coil albums in every shop that wanted them. Some critics have accused Coil and its record company of price gouging. In 2003, Coil began re-releasing many rare works, mostly remixed.

Moon's Milk (In Four Phases) is release by Coil that compiles four of their singles onto a double CD. The two disc album compiles the CD versions of Spring Equinox, Summer Solstice, Autumn Equinox and Winter Solstice (originally recorded throughout 1998, and released seasonally from March 1998 to January 1999). The album also has a live version of "Amethyst Deceivers" hidden at the end of the first disc, following several minutes of silence after "A Warning From The Sun (For Fritz)".  The release features artwork by Steven Stapleton.

At the time of release, a mail order edition was offered , comprising the standard 2CD set with the Moons Milk (In Four Phases) Bonus Disc, a CDr of extra material presented in sleeves that John Balance had individually hand-painted. 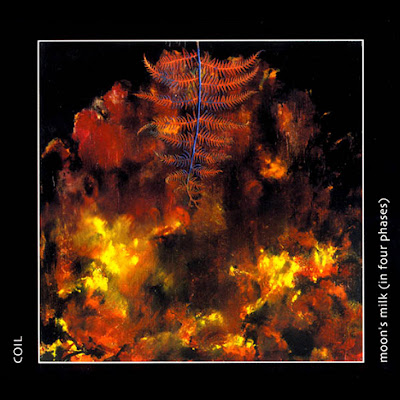 The conclusion to the 1998 season series (actually released in January 1999) certainly lives up to the title billing, in that things do sound awfully cold and gloomy this time around. Opening track "A White Rainbow" does it brilliantly, though Balance's upfront, softly echoed vocal backed by viola from William Breeze and buried background chants result in an unstable, fascinating blend. Enough randomly crazed distortion comes in at the end to send everything just enough over the top. The holiday season is invoked with the final track, the traditional "Christmas Is Drawing Near," with Rose McDowell and Robert Lee making a return appearance in the series with an excellent, enveloping performance. The two tracks in between, "North" and "Magnetic North," mix a little more instrumental warmth in here and there, but still come across as attractively alien and distant, rising and falling drones and random melodies floating with Balance's electronically roughened delivery.

Available only on dates of Coil's Even an Evil Fatigue tour in 2004, Black Antlers consists of early studio and live versions of songs that were being worked on for the next official studio album. Due to John Balance's accidental death, most of the tracks on Black Antlers would become final yet unpolished versions.  "The Gimp (Sometimes)," a ballad never quite comes together over its 11 minutes, failing to mesh the dark, ambient instrumentation with Balance's beautiful and haunting vocals. The second track, however, "Sex with Sun Ra (Part One: Saturnalia)" is a classic late-period Coil track. Balance intones a fictional tale of a conversation between himself and the free jazz legend over a pulsating backing track punctuated by bell tones and sparse industrial percussion. "Wraiths and Strays (From Montreal)" is the highlight of the album, a twisting, slithering, pulsating beast of a track that interleaves Thighpaulsandra's keyboards with Balance's cut-up vocals to hallucinatory effect. As the tempo of the piece increases, the percussion becomes more frenetic and varied, the background squiggles become more aggressive, and the song sounds like it is chasing the listener down a dark alley. While there are some excellent songs on this album, on the whole, Black Antlers doesn't make an appropriate introduction for the uninitiated. For the faithful though, this is a near-great effort from the sorely missed group of alchemists who called themselves Coil. 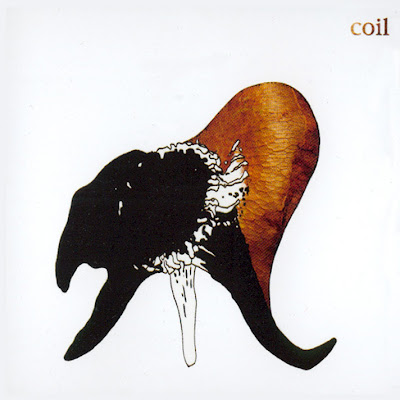 Hi Rho
Still going strong I see (and I'm still loving the diverse generosity). I wonder if I ask nicely you'd find time to re-up the two Moon's Milk and the Black Antlers flacs? If you have a flac of The Remote Viewer that would be wonderful, too. It's that Coil time of year, you see.
Best, Adam

Thank you for posting Coil.
However, "Moon's Milk" is not available on Netkups;

This file has been deleted due to inactivity