Hello, hope you'll had a good weekend. Not sure if April foolsday scored any big victims. For those that find it hard to believe any of the propaganda and lies, and are aware of the nefarious nature of todays mainstream media specially in what is omitted, April fools day is never-ending..

Today the second series of Game of Thrones starts on HBO below your chance to read the series. Here the final episode of The Sofa of Time will the boys save the world ? Will I be posting the first episode of the 12 part Spaced tv series next week ?

The coming weeks i will present you with comedy drama of the highest quality from the guys who did Shaun of the Dead and Spaced starring Simon Pegg, a superb two season tv series which im inclined to post after this series.

"The Sofa of Time was a BBC Radio 4 six part comedy drama written by and starring Nick Frost and Matt King. It was first broadcast in 2002.

"Milford (King) and Parker (Frost) get sacked from their jobs in a soft furnishings factory in Crouch End. As they are clearing out their lockers, they fall into the magical world of Gravy. Frost described Gravy as an "Tolkien-esque world with supermarkets and banks".

"There they meet Marmite the Dwarf, (Mark Heap), who believes that Milford is "the chosen one", who has come at last to save the people from the evil emperor warlock Raamen Bod, (Peter Serafinowicz), who plans to find the Sofa of Time, the most magical and powerful item of furniture in the entire universe, and use it for evil purposes.

The Sofa of Time, is written by (and co-stars) Spaced's Nick Frost alongside comic Matt King. It also features Spaced regulars Mark Heap (as Marmite the Dwarf), Julia Deakin, Peter Serafinowicz, and Simon Pegg as well as Kevin Eldon and Joseph Marcell (of The Fresh Prince of Bel Air fame).

A Song of Ice and Fire is an ongoing series of epic fantasy novels by American novelist and screenwriter George R. R. Martin. Martin began writing the series in 1991 and published the first volume in 1996. Originally planned as a trilogy, the series now consists of five published volumes; a further two are planned. In addition, there are three prequel novellas currently available, with several more being planned, and a series of novella-length excerpts from the main Ice and Fire novels.

The story of A Song of Ice and Fire takes place in a fictional world, primarily on a continent called Westeros but also on a large landmass to the east, known as Essos. The series is told in the third-person through the eyes of a number of point of view characters, 31 by the end of the fifth book.

To celebrate the start of the second tv series on HBO today a chance to delve into this glorious tale from a world with magic in stead of religious strife. 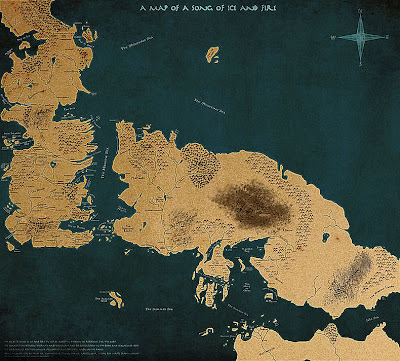 I endorse your behaviour, you are a PC genius