Hello,  as the Scots wonder why helicopters keep on crashing around them, admittedly usually over the sea, but this time downtown on a Glaswegian bar full of people. Despite the Top Gear guys showing us it could land on a car, the impact caused the roof to collapse. It still has to be established why the pilot was unable to land, he should have been even without engines, possibly he had a stroke/heart attack. Whatever, St Andrew looked away and 8 people died. Those saints and the catholic church keeps on producing them for the gullible to worship. Then there's this scientist declaring humans derived from a pig fucking a monkey- i kid you not. I prefer the Sumer version of us being bred by aliens, who knows they might have added some pig in their mix to counter their own dna, after all they didn't want their slaves as smart as themselves let alone be as quasi immortal. (which isn't as impossible as it seems as it is a telomere thing that one day could be restored enabling humans to renew their cells indefinitely). I won't live to tell that, but who knows Google might create an avatar of me....


Today's artist is again the American avant-garde composer and poet who was born May 24, 1936 (age 77) in Los Angeles, and raised in the Mojave Desert. This will be the final post with his music. His pieces are composed and open-ended; they have never been based on a "system," and they are usually delicate, impressionistic, and, more often than not, mysterious and melodic. Always, his elliptical piano sets the course, following various muses through a gauzy labyrinth and conveying great poetry, emotion, and spirituality -- without ever becoming excessive or overly sentimental.  ..... N'Joy

The American ambient/neo-classical composer who has most closely allied himself with the increasingly sympathetic independent rock underground -- through his collaborations with the Cocteau Twins' Robin Guthrie -- Harold Budd is also one of the very few who can very rightly be called an ambient composer. His music, a sparse and tonal wash of keyboard treatments, was inspired by a boyhood spent listening to the buzz of telephone wires near his home in the Mojave Desert town of Victorville, CA (though he was born in nearby Los Angeles). Though interested in music from an early age, Budd was 30, already married, and with children of his own by the time he graduated from the University of Southern California with a degree in musical composition in 1966. He became a respected name in the circle of minimalist and avant-garde composers based in Southern California during the late '60s, premiering his works "The Candy-Apple Revision" and "Unspecified D-Flat Major Chord and Lirio" around the area. In 1970, he began a teaching career at the California Institute of Arts, but continued to compose while there, writing "Madrigals of the Rose Angel" in 1972.

After leaving the Institute in 1976, Budd gained a recording contract with the Brian Eno-affiliated EG Records, and released his debut album, The Pavilion of Dreams, in 1978. Two years later, he collaborated with Eno on one of the landmark albums of the ambient style, Ambient 2: The Plateaux of Mirrors. After recording two albums for Cantil in 1981 (The Serpent [In Quicksilver]) and 1984 (Abandoned Cities), Budd again worked with Eno on 1984's The Pearl. A contract with Eno's Opal Records resulted in one of Budd's most glorious albums, The White Arcades, recorded in Edinburgh with Robin Guthrie of the Cocteau Twins. Budd left Opal after 1991's By the Dawn's Early Light, and recorded two albums for Gyroscope: Music for 3 Pianos (with Ruben Garcia and Daniel Lentz) and the lauded Through the Hill, a collaboration with Andy Partridge of XTC. In the mid-'90s, he recorded albums for New Albion and All Saints before signing to Atlantic for the release of The Room in mid-2000.

In 2004, Budd decided to retire, claiming he had said all he wanted to, and that he "didn't mind disappearing." His "final" outing, Avalon Sutra/As Long as I Can See My Breath, appeared on David Sylvian's Samhadi Sound imprint as a double disc. The album featured 14 new pieces, some recorded solo, some recorded with saxophonist Jon Gibson, and some with a string quartet. Budd apparently changed his mind about retirement and his collaboration with Eraldo Bernocchi, Fragments from the Inside, issued on Sub Rosa, arrived in the spring of 2005. Back to composing and recording, Budd signed to Darla in late 2007. He began working with producer Clive Wright that same year. In October 2008, a collaboration with Clive Wright entitled Song for Lost Blossoms was released by Darla Records. It includes recordings that were done live and in-studio at different locations, including both artists' homes. The album features some of their work done together between 2004 and 2006. A second collaborative effort with Wright, Candylion followed in 2009, again on Darla Records.

Harold Budd has been a principal figure in the Californian avant garde since the early 1960s. His latest release, Music For 3 Pianos, is the result of a long-standing friendship with fellow Americans Daniel Lentz and Ruben Garcia. Inspired by Morton Feldman's multi-piano pieces, the trio continues to explore the space between music and silence with these six sketches for piano. Music For 3 Pianos is ambient music of the highest order, in which the echoes and silences mean as much as the notes themselves.
++Fila Brazillia teams up with the ambient piano of Harold Budd and the New Wave art rock of Bill Nelson on the Three White Roses & A Budd EP. The opening track, "No Shade, No Shadow," has the drifting, sad quality that one would expect of Harold Budd, and as it loops over the length of the track, the other contributors overlay it with ominous electronics. "Adrift Amidst Les Odalisques" has a much dreamier feel to it, like sunlight dappling through leaves, and the Fila boys lay a gentle groove on top. Bill Nelson's guitar comes to the fore on "The Airless Time," like a howl of pain, with Budd's piano following beside. "Blue Locus," the final track, is almost a reflection of the opening track

With this album Harold Budd moved further towards neoclassical and chamber music, a direction he had already taken with "By the dawn's.." in 1991. "She's a phantom" is a cycle of songs recorded live at a church, featuring an ensemble called Zeitgeist. This album also contains a fine set of lyrics, written and read by Budd himself. The songs are surprisingly dark and minimalistic, with Budd's typically exceptional piano playing enlivened by Zeitgeist's empathy and gentleness. The dark atmosphere of tracks like "Pantomine", "Nearly awakened", or "In Delius' sleep" is fantastic. Within a framework of rich melodies, flawless performance, and a perfectly developed sense of the dramatic, "She's a phantom" spreads the charm of a haunted yet peaceful old castle. 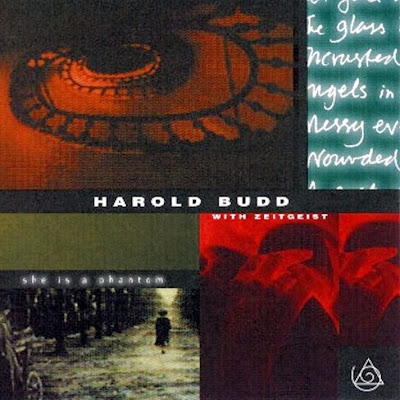 Harold Budd With Zeitgeist - She Is A Phantom (flac  181mb)

Budd, here teams up with musical nomad Hector Zazou, who had formed evocative partnerships with musicians from Africa to the Far North, from Bill Laswell to Björk. Glyph combines Budd's penchant for dreamy, shimmering electric keyboards with Zazou's rhythmic acumen, drawing from various world music sources as well as drum'n'bass and other dance club and urban sounds. Overall, it wavers between falling a bit too far on the fuzzy, new age-y side of the ambient divide (Budd's somewhat portentous vocalizations don't help) and achieving some constructions of real interest. Zazou always has a fine ear for instrumental textures, bringing in Renault Pion for some rich, sensual clarinet playing on several tracks and a couple of Finnish masters of the kantele, a kind of dulcimer, on the intriguing "Johnny Cake." The trumpet work of Christian Lechevretel, on the other hand, ventures a bit too close to a Miles Davis imitation for comfort. Fans of Zazou who have heard and enjoyed his work will find much to savor here but listeners who only know Budd from his more ethereal performances elsewhere may be slightly put off by the relatively aggressive and funky rhythms on a few pieces. Glyph is ambient music with a slightly surreal, just barely rough edge. 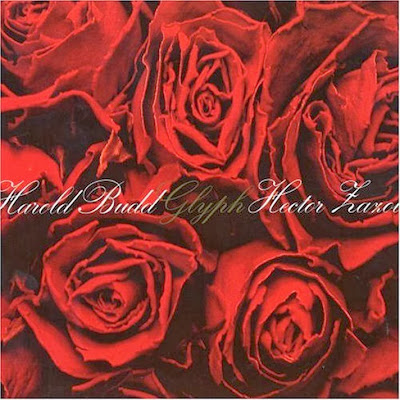 Just wanted to thank you for your blog and music selections. If not for this blog, I probably never would have discovered a bunch of great bands (Young Marble Giants, etc.). I will be looking for some of these bands at used vinyl stores. Thanks again!

Thank you for your reposts. Here is a link you might enjoy -

Can you please re-up Harold Budd?

Rho, could you reupload the albums? The links are expired.

Could you please reup She Is A Phantom? Thank you very much