Hello, as the White House announces it will be business as usual for the NSA, surprise surprise. Snowden's revelations have worked fine to intimidate the common peoples of the world, and fear is as they say a wonderful tool the haves like to employ. How different things are In Uruguay that have legalized marihuana ignoring the law as imposed by the US. I wonder how long it will take for Argentina and Brazil to follow suit. They might lack a president like José Mujica a former robin-hood style rebel, someone that won't live in a palace, prefers a simple life, donates the vast bulk of his salary to social projects, flies economy class and drives an old Volkswagen Beetle. Like Mandela he spend a considerable time of his life in jail. "I'm not the poorest president. The poorest is the one who needs a lot to live." I like this one too "Contemporary politics is all about short-term pragmatism. We have abandoned religion and philosophy … What we have left is the automatisation of doing what the market tells us." Well if i spoke Spanish I would seriously consider moving there.


These months Frenchies rule the beats and they have plenty to offer even though not that much reaches the world as  the music scene is rather dominated by the Anglo - American industry. Meanwhile the French enjoyed themselves in their own niche so to speak, and they did rather well. Today's artist, Christophe Le Friant,  born 10 May 1969 in Douarnenez, Brittany, France. Grammy Award-nominated French record producer, house music DJ & remixer, and owner of the ultra-hip independent label Yellow Productions. Suave beats this weekend  ....... N'joy

Eager to inject some fun into the burgeoning French house underground, Le Friant borrowed the name Bob Sinclar (from a character in the well-known French film Le Magnifique) and in 1997 produced his first Sinclar EP, A Space Funk Project. Soon enough, he had an entire Bob Sinclar LP ready to go, and Paradise appeared on Yellow just in time for summer 1998. One of the album's tracks, "Gym Tonic," began getting some club play in France thanks to its bouncy house vibe and incessant singalong chorus (lifted from a Jane Fonda workout record). A huge anthem during the summer season in Ibiza, "Gym Tonic" looked ready to explode on the charts until Fonda sought legal action for the illegal sample. Perhaps wary of overly burdensome commercial success, the song's co-producer -- Daft Punk's Thomas Bangalter, who'd just recorded his own breezy house delight, Stardust's "Music Sounds Better with You" -- refused to have even a remixed version released as a single. Nevertheless, assorted bootlegs cropped up and by October a mysterious artist named Spacedust -- probably just a major-label-fronted cash-in attempt -- hit the top of the charts in Britain with an almost identical remix of the Sinclar-Bangalter original, entitled "Gym and Tonic." (Another crass Spacedust move, covering Bangalter's solo hit with the slimly disguised title "Music Feels Good with You," dropped like a rock.)

With all the offending samples removed, Sinclar's Paradise LP was re-released worldwide in 1999. He also worked on remixes, providing tracks by Bangalter himself, Ian Pooley, Second Crusade, and the Yellow project Tom & Joyce with additional production. Le Friant returned to the Mighty Bop alias in 2000 with the retrospective mix collection Spin My Hits. In 2000, he issued his first U.S. album release as Sinclar, Champs Elysées, on Subliminal Records. The 2001 release Cerrone by Bob Sinclar found him mixing his personal favorites from the back catalog of one of his big influences, Cerrone. After climbing the dance charts in 2005 with the single "Love Generation," he released the full-length Western Dream in 2006. See Beats 1333

The Mighty Bop, along with DJCam, Dimitri, Kid loco, St.Germain, and others have put Paris on the musical map. The Mighty Bop is one good reason that they're making great music, using turntable and samples to constuct clever and interesting music. The two releases that are available in america, La vague sensorielle,and autres voix autres blues are fine examples of why this music has a following has well has detractors. These two gems are overlooked for what so many "mainstream" hip-hop acts seriously lack, a well schooled and competent dj. Though most of the vocals on Autre Voix Autre Blues are in French, this shouldn't detract from what I feel is great music being made in obscurity in a country and culture as complex as any.

La vague sensorielle is more the "abstract" side of the Mighty Bop and features "la funk mob" with DJPhuck. It is the first release under this name and it has all the elements of hip-hop with what is being called "abstract" elements thrown in throughout the cd. However it doesn't wind up being just for show as these musicans along with DJCam continue to create and define the hip-hop genre in their own way, the French way I suppose?  Dark, smoky trip-hop, from the smooth thump of “Sans Remission” to the French free flow on “Freestyle Linguistique,” the album lulls the ears into a sense of safety, only to get hit with a phat beat and some swift cuts. “Le Voyage” sends the listener right out to sea, while “Muthaf***in’ Ghost” is appropriately eerie. A strong album, without a doubt. 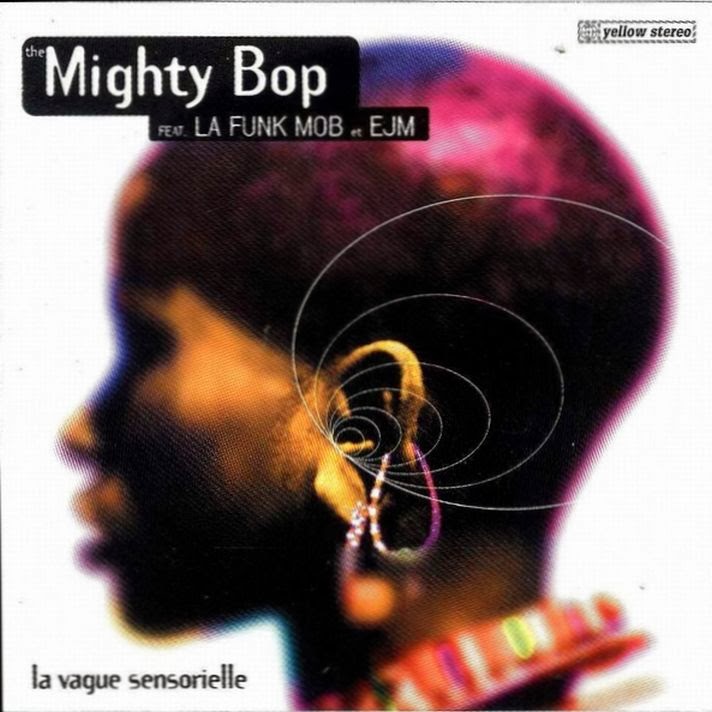 Autres Voix Autres Blues takes The Mighty Bop another level higher. As with "La vague sensorielle" The Mighty Bop remains elusive to catagorize. Samples, loops, and blends of jazz\house\and rap make this a unique listening in any language. Though their keen sense of hip-hop is on full-display (like on the stripped-down "Excursion Mentale"), they also show a more nuanced and integrated approach to melody. Needless to say, Louise Vertigo's lovely voice on tracks like helps stitch these elements together - - just listen to the deep, funk groove of "Peau D'Ane" or the neo soul of "Je N'ai Pas Le Choix." "Un Jour..." carries a heavier beat, and it pushed forward by Vertigo's expressive vocals. If you're in the mood for something more upbeat, "Initials MB" and "Moody's Mood" throw a house beat into the mix that's as deep as a hole in the earth. Outstanding 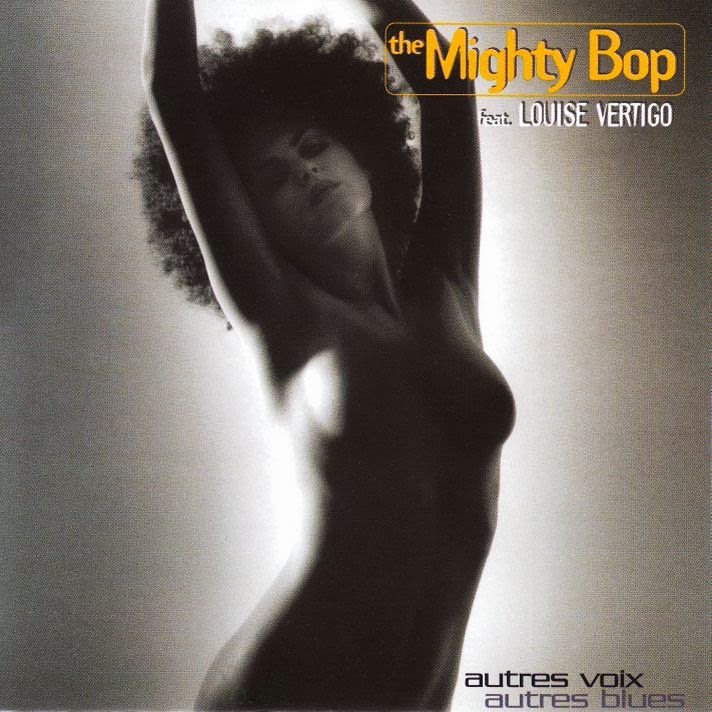 On their self-titled album, The Mighty Bop emerge from the darker recesses of jazz into the sun, going for bright and peppy rhythms and melodies. The track "Sunshine Magic" pretty much explains it all. "Too Deep" goes for St. Germain-style jazz house, while "Tell Me" is a Burt Bacharach track exported to France. Though their new uptempo direction is done with quality and care, it sounds a little too familiar to that entire genre. "Summer Session," for instance, sounds as if it could have been done by anyone at all. But "I Go Crazy" shows its own personality, an ompah-jazz track perfectly suited for cabaret singers around the world, and "On the Moon" is a seaside vacation on a lunar beach. It's a good way to end an album. 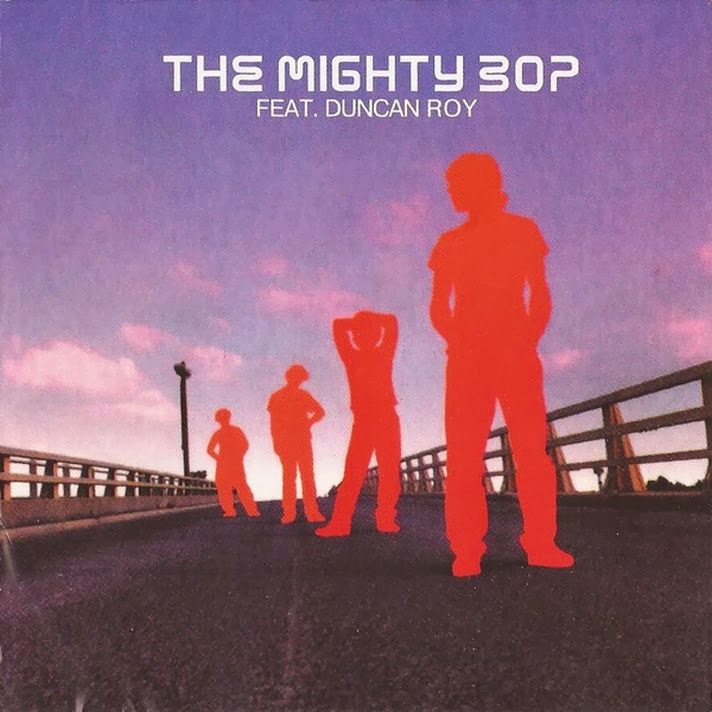 Great blog I visit often and have discovered so many gems. Any chance for a re-up of the mighty bop stuff? Would be greatly appreciated.

Hello Rho! Thanks for the reuploads... I know it is a lot of work and I certainly do appreciate it! I'm just letting you know that The Mighty Bop - 'The Mighty Bop' link isn't active. Maybe it was mistakenly forgotten? Anyways, thanks for everything and have a great day!