Today we find ourselves amidst the music of Egypt .....N'joy

Egyptian music has been an integral part of Egyptian culture since ancient times. The ancient Egyptians credited the god Thoth with the invention of music, which Osiris in turn used as part of his effort to civilize the world. The earliest material and representational evidence of Egyptian musical instruments dates to the Predyanstic period, but the evidence is more securely attested in the Old Kingdom when harps, flutes and double clarinets were played. Percussion instruments, lyres and lutes were added to orchestras by the Middle Kingdom. Cymbals frequently accompanied music and dance, much as they still do in Egypt today. Egyptian folk music, including the traditional Sufi zikr rituals, are the closest contemporary music genre to ancient Egyptian music, having preserved many of its features, rhythms and instruments.

Religious music remains an essential part of traditional Muslim and Coptic celebrations called mulids. Mulids are held in Egypt to celebrate the saint of a particular mosque or church. Muslim mulids are related to the Sufi Zikr ritual. The Egyptian flute, called the Ney, is commonly played at mulids. The liturgical music of the Coptic Church also constitutes an important element of Egyptian music and is said to have preserved many features of ancient Egyptian music. Coptic music is the liturgical music of the Coptic Church. It consists mainly of chanted hymns in rhythm with instruments such as cymbals (hand and large size) and the triangle. It has preserved some features of ancient Egyptian music, and few of its melodies are identified and labeled as Syrian (called Shamy in the Coptic Church) or Byzantine (called Roumy or Roman in the Coptic Church).

Bedouin
Bedouin music is found in the deserts of the west, near Libya, and the eastern Sinai area. The Mizmar, a twin-pipe clarinet, is the most popular folk instrument, and popular singers include Awad e'Medic.

Nubian
Nubians are native to the south of Egypt and northern Sudan, though many live in Cairo and other cities. Nubian folk music can still be heard, but migration and intercultural contact with Egyptian and other musical genres have produced new innovations. Ali Hassan Kuban's jazz fusions had made him a regular on the world music scene, while Mohamed Mounir's social criticism and sophisticated pop have made him a star among Nubians, Egyptians, and other people worldwide. Ahmed Mounib, Mohamed Mounir's mentor, was by far the most notable Nubian singer to hit the Egyptian music scene, singing in both Egyptian Arabic and his native Nobiin. Hamza El Din is another popular Nubian artist, well-known on the world music scene and has collaborated with the Kronos Quartet.

Sha'abi
Adaweyah, by far the most popular Egyptian sha'abi singer in the history of Egyptian music, initially gained controversy for his lyrics, which were often humorous, salacious and highly critical of social rules and respectable society. By the 1980s, shaabi was being influenced by music from the United Kingdom and United States, as well as other Egyptian pop stars. Electric guitars, synthesizers, and later beat boxes, were integrated into the music, which is now highly-polished and meant for mainstream consumption. Today, the most popular shaabi stars are Hakeem and Shaaban Abdel Rahim.

Al Jeel
Al Jeel music genre arose in the 70s. It was dance-pop modeled after foreign rock and roll and pop music with a background rhythm similar to reggae, and it included distinctively Egyptian characteristics. Hamid el Shaery, a Libyan living in Egypt, was the most influential of Al-Jeel's early performers.

Popular music
Until the late 1970s, classical singers like Um Kulthoum were Egypt's biggest pop stars. By the middle of the 1990s, though, Al Jeel and al shaabi music had taken over, especially among young audiences.  Starting in the late 1960s, light song emerged as the first modern Egyptian pop tradition. Often nationalist in tone, light songs were humorous and sometimes risqué. It was dominated by singers like Aida el-Shah and Leila Nazmi, who were popular in middle-class communities. The working class youth of Egypt reacted against light songs and shaabi music evolved out of Cairo's poorest districts. Shaabi began entering the mainstream of Egyptian society in 1971, with the breakthrough success of Ahmed Adaweyah. Since the 1970s, Egyptian pop music has become increasingly important in Egyptian culture, particularly among the large youth population of Egypt. Egyptian folk music continues to be played during weddings and other traditional festivities. In the last quarter of the 20th century, Egyptian music was a way to communicate social and class issues. Among some of the most popular Egyptian pop singers today are Mohamed Mounir and Amr Diab.

The 20th century has seen Cairo become associated with a roots revival. Musicians from across Egypt are keeping folk traditions alive, such as those of rural Egyptians (fellahin), the Nubians, and the Arab and Berber Bedouins. Mixtures of folk and pop have also risen from the Cairo hit factory.  Sawahli (coastal) music is a type of popular music from the northern coast, and is based around the simsimaya, an indigenous stringed instrument. Well-known singers include Abdo'l Iskandrani and Aid el-Gannirni. After the second millennium, a music revolution was started in Egypt as bands started to become more popular and more famous year after year. It began with bands like Eftekasat and Wust El Balad with the help of El Sawy Cutlurewheel, Cairo Jazz Club, multiple cultural centers like the French Culture Centre. As a result, people started to become more aware of the different genres that could be presented by the different bands as the bigger Egyptian taste was more of pop artists like Amr Diab, Mohamed Mounir and Tamer Hosny.

Although the album is subtitled "Cairo to Nubia: the source of Arabic music," the booklet takes care to point out that there's no classical Arab music here -- which perhaps explains the absence of Umm Kulthum, the greatest icon of Arab music. Instead, the concentration is on modern-day stars, and they don't come any bigger than Amr Diab, who gets two tracks, and deservedly so. His pop music keeps its roots firmly in Egypt under a gloss that never tries too hard to be international. A couple of the old-timers -- Warda and Mohamed Abdel Wahab -- are represented, and Abdel Halim Hafez proves to be the real link between the past and the present with "Ahwak." The inclusion of cuts from four Nubians is interesting, showing different facets of the music they've brought to Egypt. Both Mahmoud Fadl and Ali Hassan Kuban display their backgrounds proudly, while Hamza el Din forged a new fusion of styles in his music and Mohamed Mounir is almost a law unto himself, with a sound that's absolutely unique (and enthralling on "Sala Fi Serri We Gahri"). Angham and the interesting Nagat el Saghira both also warrant a pair of cuts, but their material simply isn't as strong -- too formulaic and ultimately bland. Nonetheless, this is an interesting portrait of Egyptian music at the beginning of the 21st century.

Some excellent music - the first six tracks are great. I would almost give this five stars - probably 4 1/2 overall - but it starts repeating artists after the first six tracks. We have Amr Diab, Abgham, and the rather obscure Nagat el Saghira all TWICE. There should never be the same artists twice on a rough guide. It's not as if there's a lack of music in Egypt. Besides, there are ommissions; virtually no folk, Arabic classical or Sufi music, and as others have pointed out, no Umm Kalthoum, though I've never heard anything by her. However, Nubian music is represented excellently by good tracks from Ali Hassan Kuban, Mahmoud Fadl and the Cairo Opera orchestra, and Hamza el Din. There's also quite a lot of old music from former stars such as Abdel Hlim Hafez, Mohamed Abdel Wahab, and Warda (and Nagat el Saghira, twice, on slightly old recordings.) And there's alot of pop music, most of which is still pretty traditional. 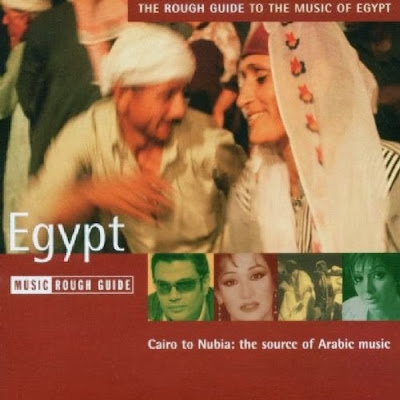 Rough Guide To The Music Of Egypt (flac  428mb)

Hossam Ramzy was born in Cairo, Egypt. His musical career began early, when at the age of three he was given his first drum, an Egyptian Tabla..... Hossam's passion and huge talent for percussion was noted by his family, many of whom were themselves involved in the arts. Hossam was encouraged to master his craft and studied under leading Cairo music teachers. A move to Saudi Arabia led him to joining with many Bedouin tribes which gave the young Hossam a rich insight into the cultural origins of Middle Eastern music and became the inspiration for many of his later rhythmic directions.

This is a workshop with Egypt's master percussionist Hossam Ramsey. The listener is introduced to basic Arabic instruments, the Tabla, the Mazhar, the Duf, the Reque, the Doholla and the Sagat. Each in turn is played and a short description is given. Mr. Ramsey then explains 6 different rhythms giving an example of each. The recording concludes with a wonderful long piece which gives examples of all the rhythms presented. I love to dance to this piece. The rhythms presented are Masmoudi, Maqsoum, Malfuf, Zaar, Fallahi and Saaidi. Even if you are tone deaf, you should at least be able to hear the differences between the Masmoudi and the Malfuf and the Zaar .... and the repetitive nature serves to reinforce the lesson. But even if you don't get it at 1st go, try try again... the penny will drop one fine day! For those looking for nice "Oriental background music" this is not for you. For dancers....this is not really suitable for a choreographed show/ piece but it's still good for a workout ...those hip drops, that 3 step malfuf, the zaar moves...plenty to work on there. You could also work on your zill skills here by playing along. 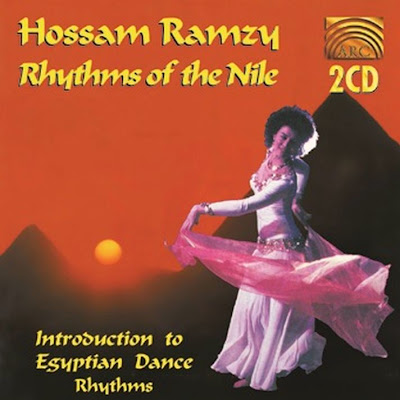 Their dazzling mix of traditional songs is perfectly showcased on this early Real World release, which was taped in both France and England during the late '80s. With the dusky strains from the rababah (traditional fiddle), the mizmar (an oboe-like instrument), and the tablah (a hand drum similar to the darbouka) filling the air, the group delivers an array of trance-inducing long-players, including ensemble pieces as well as solo spotlights like the tablah feature "Zahrafat Al Sa'id" (Rejoicing in Upper Egypt) and the arghul (double-reed clarinet) vehicle "Kol Elle Qalboh Ankawa" (Everyone Has Had a Broken Heart). From the opening sounds of the horse and buggy and street sounds in Luxor to the haunting and melodic sounds of the rababah to the beat of the tablah, it is a wonderful collection of songs. An essential disc for world music connoisseurs. 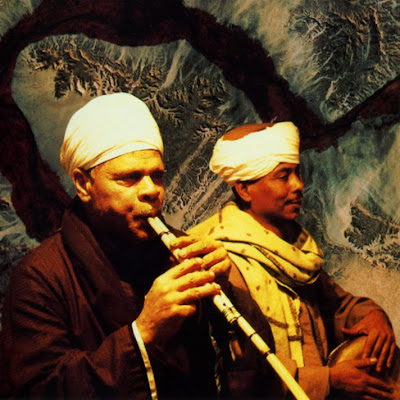 The Musicians Of The Nile - Luxor To Isna (flac 298mb)

Firat, great thanks for all the shares.
I would greatly appreciate if you could re-up the Rough Guide To The Music Of Egypt.

Thanks for all the music you're sharing! I <3 your blog!
The links on this post don't work :(

Hello Bruno, Julius sorry about that everything had been re-upped but i forgot to enter the new links, That mistake has been taken care of now. N'Joy