Today we find ourselves amidst the music of Sudan. Disproportionate to its status as Africa’s largest country, Sudan has seemingly not yet been musically mined to the same extent as smaller countries like Mali, Senegal, or Ethiopia. Perhaps because Sudanese music, doesn’t share the easy rhythms, bluesy affinities or star power of the aforementioned countries, but the spirit and passion of the music show that there’s no reason for the nation’s relative musical obscurity to continue......N'joy

In Sudan there's an added dimension to the ages-old argument over the legitimacy of music and dance under Islam: one third of the people affected by it are not even Muslim. And whatever their religion, Sudan's people - 300 ethnic groups - embody such a collision of Arab and African cultures that it's often impossible to tell where one culture ends and the other begins.

Arab tribes arrived in the 14th and 15th centuries from across the Red Sea and the northern fringe of Africa; in the 16th century West Africans began journeying through northern Sudan on the pilgrimage to Mecca. Both settled and intermarried with the indigenous people. Southern Sudan, largely cut off until the mid-19th century by the vast swamps of the White Nile, was treated as a source of slaves, ivory, ostrich feathers and gold. No wonder the continent's largest country has an identity problem alongside a deep-rooted civil war. With seperation of mainly christian and pagan South Sudan in July 2011 the dust hasn't settled curremtly the south Sudanese are warring amongst themselves. South Sudan is at war with at least seven armed groups in 9 of its 10 states, with tens of thousands displaced.[26] The fighters accuse the government of plotting to stay in power indefinitely, not fairly representing and supporting all tribal groups while neglecting development in rural areas.

Well at least they are alowed to make music and dance again, since the 1989 coupe by the National Islamic Front that emposed a severely oppresive regime, ah yes Islam, hell style, inhumane beyond belief and still those religious nutters destroy laughter. In Sudan there's an added dimension to the ages-old argument over the legitimacy of music and dance under Islam: one third of the people affected by it are not even Muslim. And whatever their religion, Sudan's people - 300 ethnic groups - embody such a collision of Arab and African cultures that it's often impossible to tell where one culture ends and the other begins.

Arab tribes arrived in the 14th and 15th centuries from across the Red Sea and the northern fringe of Africa; in the 16th century West Africans began journeying through northern Sudan on the pilgrimage to Mecca. Both settled and intermarried with the indigenous people. Southern Sudan, largely cut off until the mid-19th century by the vast swamps of the White Nile, was treated as a source of slaves, ivory, ostrich feathers and gold. No wonder the continent's largest country has an identity problem alongside a deep-rooted civil war.

The Nuba are caught on the dividing line between the warring cultures of north and south Sudan, but are fighting back against a government programme of "ethnocide" with their own reawakening identity. Under the squeeze of the government's crude "Islamisation" campaign, the diverse, multi-religious Nuba communities are uniting in resistance, defending their own culture as much as their land. The Kambala, or harvest festival, is still celebrated, and there is a proliferation of new songs and artists. The vibrant Black Stars are part of a special "cultural advocacy and performance" unit of the rebel Sudan People's Liberation Army (SPLA) in the Nuba Mountains. Their most famous vocalist is Ismael Koinyi, an accomplished guitar player who sings in Arabic and in several Nuba languages. Other vocalists include Tahir Jezar, Jelle and Jamus.

Don't confuse the Nuba of south-west Sudan with the Nubians, like Wardi and Hamza al-Din, who are from Nubia in the far north of the country - between Dongola and the Egyptian border at Wadi Halfa (and beyond). Both groups are indigenous Sudanese, rather than of "Arab" origin, but any link is ancient history.

Few Northern Sudanese wholeheartedly support the government's obsessive division of the sexes, lots are repressed dancers, and many older ones look back nostalgically to the era before 1983 and Sharia law. That was when President Nimeiri, with NIF support, closed the bars in Khartoum and chucked the alcohol in the Nile. Two years later, the Sudanese people chucked Nimeiri out. But in 1989, the NIF came back, seizing total power in a military coup.

Hostile to art that it cannot control, the NIF has introduced an "Islamisation of Art" programme in an attempt to dictate the terms of the discourse. All performers and works of theatre, cinema and music are supposed to be approved by religious jurists. Songs in praise of the para-military Popular Defence Force and jihad are broadcast all the time. The diverse range of folk music and dance within Sudan itself often fails to meet the criteria, or is relegated to condescending "ethnological" broadcasts. The Morality Monitoring Unit of the shadow "police force" known as the General Administration of Public Order extends its remit to musical performances at wedding parties - the most frequent venue for music. Weddings are regular targets for raids on the grounds of Public Order Act offences, mixed dancing, or "unapproved" songs or singers.

Relatively few Sudanese musicians have access to modern recording studios, although a couple more have recently been built in Khartoum. A growing number of Sudanese CDs has been released on the international market, but few people in Sudan have CD players and many classic performances are still on tape only - if you can find them at all.

A good selection of cassettes is available from Natari in the UK and Africassette in the US. For information on field recordings, including Zar and women's music, contact Sudan Update, PO Box 10, Hebden Bridge, West Yorkshire HX7 6UX, England (sudanupdate@gn.apc.org).

A collection of songs culled from recordings made during a stop in a European tour by three of Sudan's more popular artists in 1986; Abdel Gadir Salim, Abdel Aziz El Mubarak, and Mohamed Gubara recorded a number of tracks while touring together. Abdel Gadir Salim, accompanying himself on the oud, provides a look at the more rural sounds from the Kordofan area of Sudan. El Mubarak gives a much more urban sound, complete with influences from the greater world. Mohamed Gubara provides a contemporary palette lyrically, but accompanies himself on the ancient tambour lyre. The sound is an interesting one throughout the album, with careful picking on the ouds mixed with the basic bouncing accompaniment strokes. Accordion work from Azhari Abdel Gadir helps push the music of the two oud players considerably as well. Vocally, the first two are mildly similar, holding a good deal of the same vocal aesthetics. Gubara, on the other hand, sings in an abnormally high range, not quite at falsetto level, but getting there. Without delving into full-fledged modern Sudanese pop, there aren't a terribly large number of artists or albums of Sudanese semi-traditional music on the market. This album is one of a few in a relatively narrow field, and does well as such. Give it a listen as an introduction to the music of a rather large region of influence that doesn't quite conform to the sounds of the rest of North Africa. 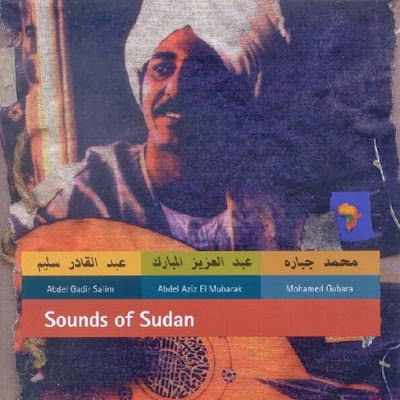 The Ingessana and Berta people of Blue Nile, bordering Ethiopia, are under pressure from war and commercial agriculture and mining, and their way of life is changing fast. This is a rare chance to hear their traditional music, including horns, lyres and balafons, recorded by Robert Gottlieb in the mid-1980s. With booklet.

Kudos to Rough Guide for doing something that other world music samplers often fail to do: presenting the music in an even-handed and empathetic manner. The liner notes include a brief but informative overview of Sudan’s musical history up to the present as well as helpful bios for each of the featured musicians that aid the listener in understanding the context and creation of the music presented here. The clear sense that the people at Rough Guide are interested in the music on its own terms is in stark contrast to less culturally conscientious labels like Putumayo, who seem intent on reducing world culture to the status of coffee shop soundtracks.

Lucky for the listener, the stand-alone quality of much of the music is strong enough to transcend any would-be attempts at marketing dilution. A single track like the otherworldly and utterly beautiful chanting of the Omdurman Women’s Ensemble on Daloka Bet El Mal (which sounds like a prayer but is about drinkin’ hooch and smokin’ herb), especially in the soft memory of a post Live 8 world, serves to remind western listeners that Africa’s afflicted countries deserve to be thought of as more than just charity cases and instead acknowledged as being the home of vibrant populations creating equally vibrant culture.

All cultural implications aside, much of the music on Desert Rhythms & Savannah Harmonies just plain cooks. Tarig Abubakar’s & the Afro-Nubians makes like a suave Saharan James Brown on Tour to Africa where, backed by a cool groove, he runs through African nations like a funky conductor. A sense of cool sophistication is also evidenced in the sensuous intertwining of Arabic strings and a smoky saxophone on Abdel Azziz El Mubarak’s Na-Nu Na-Nu.

As the result of their lack of traditional western musical training, there may be an unfortunate tendency to regard African musicians as naturals take their estimable skill for granted. Don’t. Even on a musically sparse tracks like Muhamed El Amin’s Habibi, which features just vocals and oud, the ability to the flowing virtuosity needed to casually render complex picking patterns while singing is nothing short of astonishing.

When placed alongside such refined brilliance, certain tracks that attempt to weld traditional and modern sounds somewhat suffer in comparison. The thin-sounding drum machine and synthesizer on Emmanuel Jal’s Gua mars what is an otherwise interesting convergence between traditional Sudanese music and hip-hop. On other songs, the keyboards sound like they’d be more at home in Toto’s Africa than today’s Sudan. The delicate balance between old and new is best managed on Mohammed Wardi’s Azibbni, where accordion and fuzz guitar come together to build something new on top of old foundations. While Sudanese music may not yet have the cultural cache of some of its geographic neighbors, don’t wait for the cultural cognoscenti to check your passport. The border’s open. 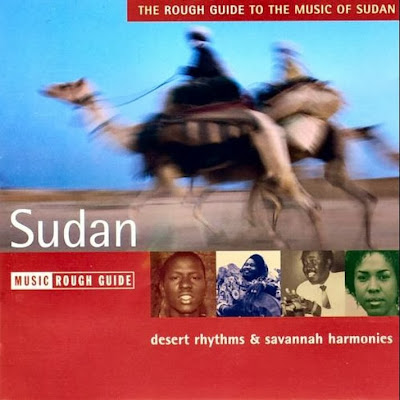 Thank you very much

Hi Rho, could you re-post The Rough Guide to Sudan please? thanks Kindly, Sam