Today's artists were a Scottish post-punk band founded in the Glasgow suburb of Bearsden as the Nu-Sonics in 1976. Edwyn Collins formed the Nu-Sonics (named after a cheap brand of guitar) with his school-mate Alan Duncan and was subsequently joined by James Kirk and Steven Daly. The quartet renamed itself Orange Juice in 1979, adopting the new moniker as well as an aura of romantic innocence as a direct reaction to the increasingly macho aggression of punk.
......N'Joy

The leaders of the Scottish neo-pop uprising Orange Juice formed in Glasgow in late 1976. Originally dubbed the Nu-Sonics, the group comprised vocalist/guitarist Edwyn Collins, guitarist James Kirk, bassist David McClymont, and drummer Steven Daly; following the formation of the Postcard label by Collins protégé Alan Horne, the quartet renamed itself Orange Juice in 1979, adopting the new moniker as well as an aura of romantic innocence as a direct reaction to the increasingly macho aggression of punk.

You Can't Hide Your Love Forever As Postcard's flagship band, Orange Juice quickly distinguished the label as a leading proponent of independent pop music; their 1980 debut single "Falling and Laughing," recorded for less than 100 pounds, garnered massive critical acclaim, and subsequent releases like "Blueboy," "Simply Thrilled Honey," and "Poor Old Soul" further established the group as a major new talent. Soon, sessions began for a full-length album; however, in the midst of recording, Orange Juice left Postcard to sign to Polydor, which funded the LP's completion. After the 1982 release of the album, titled You Can't Hide Your Love Forever, ex-Josef K guitarist Malcolm Ross joined the group, hastening the exit of Kirk and Daly (who went on to form Memphis) and paving the way for Zimbabwe-born drummer Zeke Manyika.

The addition of Manyika gave Collins the new capability of exploring a more complex fusion of pop and blue-eyed soul; consequently, 1982's Rip It Up was a more ambitious affair than its predecessor, veering from the buoyant Motown tribute "I Can't Help Myself" to the energetic pop of the title track, Orange Juice's lone Top Ten single. However, subsequent releases failed to chart, and relations between the group and Polydor began to disintegrate; amid these tensions, both Ross and McClymont quit, with Ross later resurfacing in Aztec Camera. Reduced to the duo of Collins and Manyika, Orange Juice enlisted reggae producer Dennis Bovell to record the 1984 EP Texas Fever.

After a makeshift tour, Collins and Manyika returned to the studio to record a dark, ambitious full-length effort; released in 1984, neither The Orange Juice nor its singles "What Presence?!" and "Lean Period" charted, and Collins was dropped from his contract, although Polydor kept Manyika on as a solo act. Only in 1995 did the stunning single "A Girl Like You" finally win Collins the commercial respect that had so long eluded him and his former bandmates. Later on, throughout the late '90s and early 2000s, the rise of Scottish bands as disparate as Belle & Sebastian and Franz Ferdinand won Orange Juice a younger set of fans, helped in part by the 2005 early work compilation The Glasgow School. Then in 2010 the Coals To Newcastle boxset (a 6cd last word) was released.

In a BBC 6 Music radio interview on 18 February 2005, Collins said he felt unwell, but ascribed the nausea and vertigo to food poisoning. Two days later, he was admitted to intensive care in London's Royal Free Hospital after apparently suffering a major cerebral haemorrhage. After suffering a second haemorrhage he had an operation on 25 February 2005, which was followed by a lengthy programme of neurological rehabilitation owing to right-sided weakness and difficulty with speech. The aphasia he suffered allowed him to repeat only four phrases, over and over again: "yes", "no", "Grace Maxwell" (his wife's name) and "the possibilities are endless". Collins released his sixth solo album, entitled Home Again, in September 2007 on Heavenly Records. The album was recorded before his illness but mixed after his discharge from hospital. While still recovering, Collins returned to singing live, including playing a gig at The Arts Theatre in London, UK.

After leaving Postcard Records and convincing Rough Trade to finance the sessions, Orange Juice ended up signing to Polydor for their 1982 debut album, You Can't Hide Your Love Forever. Made up of a couple re-recordings of brilliant songs from early singles ("Falling and Laughing," "Felicity"), cleaned-up versions of songs from the demo, and a few new tracks, the album is a slick, tuneful slice of early-'80s pop that's catchy and bright, and only slightly overcooked. Both Edwyn Collins and James Kirk could have retired after this album and been secure in the history books as two of the finest songwriters of the era. Kirk's "Three Cheers for Our Side" and "Felicity" are brilliantly odd and hooky songs that sound unlike anything anyone else was doing at the time; Collins' songs are reliably witty, cutting, and romantic with lovely choruses. "Falling and Laughing" is timeless pop, "Tender Object" is rippingly good dance-punk, his ballads are heartbreaking ("Untitled Melody," "In a Nutshell"), and "Consolation Prize" takes the prize for hilarity ("I wore my fringe like Roger McGuinn's/I was hoping to impress/So frightfully camp it made you laugh/Tomorrow I'll buy myself a dress"). Not too many other folks were writing songs like these, either. Add some excellent guitar interplay between Kirk and Collins and a strong rhythm section to the mix and you've got something that seems hard to mess up. Unfortunately, some of the production choices come close to wrecking things, as the tinkling pianos and backing vocalist can come on a little strong at times. The glossy finish given to the album is also a giant leap from the scrappiness of their early sound, though its effects are lessened by the exuberant energy the band plays and sings with at all times. These criticisms aside, once one accepts that the arty punks Orange Juice started off having fully embraced the sophisticated pop side of the world, then it's easy to see that You Can't Hide Your Love Forever is one of the best examples of early-'80s pop there is. That it's the one and only album the team of Collins and Kirk made before splitting only makes it all the more essential to own. 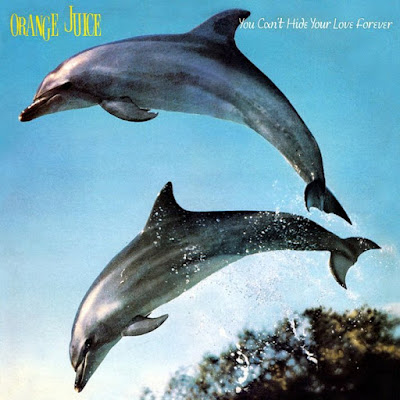 After releasing their first album in February of 1982, Orange Juice were struck with their usual batch of bad luck. First drummer Steven Daly and guitarist James Kirk, whose songwriting efforts were crucial to the band, left; then the label pressed them to follow up with a new album as soon as possible in order to cash in on their fading buzz. After adding ex-Josef K guitarist Malcolm Ross and drummer Zeke Manyika, they headed back to the studio and Rip It Up was released a mere ten months later. The album reflected the lineup change and quick turnaround quite a bit. In the search for material, Manyika contributed two songs with an Afro-pop influence ("A Million Pleading Faces" and "Hokoyo") and Ross brought a sprightly song he wrote while in Josef K ("Turn Away"), and while they are all good efforts, they don't measure up to Kirk's contributions. Edwyn Collins went back to a couple old songs and revamped them for the album, turning "Breakfast Time" into a weirdly reggae-influenced ballad and "Louise Louise" into a jaunty, jazz-influenced trifle. He also took a song from the very earliest incarnation of the band as the Nu-Sonics and stretched it out into the overly long "Tenterhook." So far not the makings of a great album, but the rest of the songs turn the tables almost completely. "Mud in Your Eye" is a sweet little soul crooner with heartfelt guest vocals from Paul Quinn, "Flesh of My Flesh" is a bouncy tropical pop song that shows Haircut 100 how it really should be done, and "I Can't Help Myself" gives the Four Tops a run for their money in the hooks department. Best of all is the title track, a timeless indie dance classic that rode an impossibly catchy synth bassline, infectious handclaps, and one of Collins' best lyric/melody combos right to the top of the charts. Despite these moments of genius, the album is an uneven and frustrating listen that proves you can't rush a band into making great art. And despite the frustrating nature of the album, Rip It Up is definitely still worth checking out for the moments of brilliance and the overall sound Orange Juice deliver even in their weakest moments. 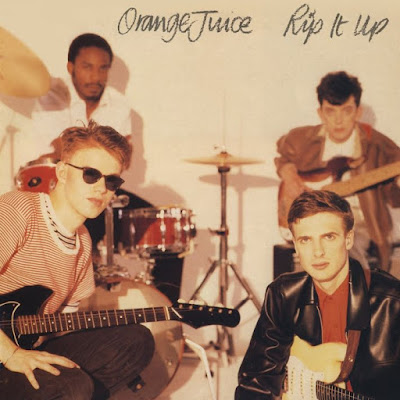 By the time Orange Juice headed into the studio to record their third album, they were coming off the biggest hit of their career (the "Rip It Up" single), but also in classic OJ timing, splintering into two parts as well. When they left the studio some time later, the album had become an EP and two of the members (guitarist Malcolm Ross and original bassist David McClymont) had flown the coop. Despite the tumult, the resulting music is textbook OJ guitar pop that brims with shiny hooks, snarkily sophisticated lyrics, and bubbling rhythms. Edwyn Collins turns in the usual clutch of witty, impossibly catchy songs that really sound like hits, but somehow ended up misses instead. "Bridge" should have ridden its highly danceable grooves, raging guitar leads, and corny handclaps to the top of the charts; "Craziest Feeling" has wonderfully peppy verses that should have endeared it to the masses; and "The Day I Went Down to Texas" is a typically classy track with a brilliantly placed double-time chorus that simply screams Motown in the best non-copycat way. The other three songs aren't far off the pace either, with a lovely Hi Records-inspired ballad ("A Place in My Heart"), a little jittery disco-punk ("Punch Drunk"), and a downcast yet still wonderfully melodic and romantic track ("A Sad Lament") all sounding great. Texas Fever may have been born of discord and frustration, but no matter. It's still classic Orange Juice, and that means it's right up there with the best music the post-punk era had to offer. 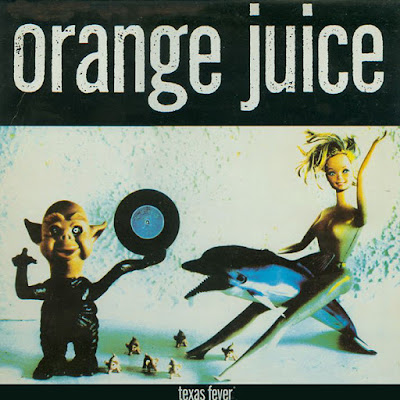 After the group splintered yet again during the recording of what turned out to be the Texas Fever EP, Orange Juice returned as the duo of Edwyn Collins and Zeke Manyika to craft maybe the most satisfying album of their too-short career. Working with producer Dennis Bovell for the most part, the record sounds great from start to finish. Highly polished mid-'80s pop with plenty of dubby bass (provided by Clare Kenny), inventive rhythms, and some of Collins' best vocal work, the record is a sophisticated, diverse, and mature work that easily stands the test of time, even if it was somewhat dismissed at the time of release. Collins also managed to craft an incredible batch of songs that range from the laid-back grooves of tracks like the self-effacing "I Guess I'm Just a Little Too Sensitive" and the guitar-heavy and determined-sounding "What Presence?!" to charging rockers like "The Artisans" and "Salmon Fishing in New York," with plenty of introspective ballads that suggest Collins was doing a bit of soul-searching at the time. Indeed, his decision to pack up the band and head out as a solo act soon after the album's less-than-heralded release seems to bear this out. Titles like "Lean Period" and "Get While the Gettings Good" make it clear, so does the elegiac "All That Ever Mattered," which sounds like nothing less than a lovesick ode to bandmembers come and gone. Orange Juice may be the group's swan song that came too soon; it's also an excellent example of why people still care about the band years later. 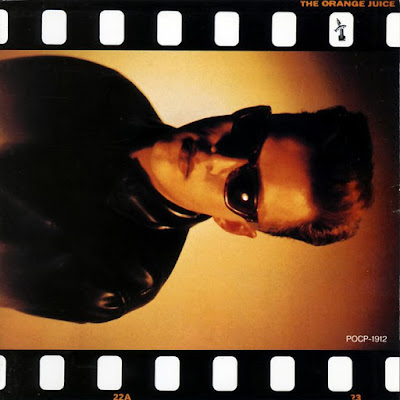 Thanks so much for this set!

Would be very grateful if you'd re-up Orange Juice - Rip It Up. Thanks.

Thanks for the re-up, much appreciated.

Thank you. Always loved Orange Juice. Any chance of getting stuff from the other Postcard bands? I'm thinking of the Fire Engines, Win and Nectarine #9.