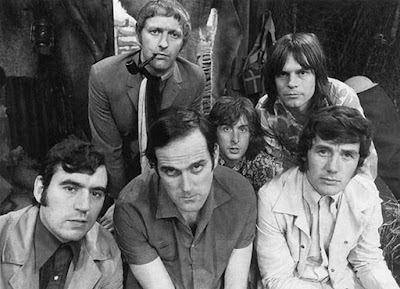 Another Monty Python Record, released in the U.K. in 1971, made its American debut the following year; for most U.S. fans, the album was their first exposure to the troupe -- the BBC series did not begin appearing on public television outlets for several more months. After 1972's Monty Python's Previous Record, a mixture of original routines and TV material featuring "Eric the Half a Bee," "The Argument Clinic," and "Embarrassment/A Bed-Time Book," the group issued 1973's Matching Tie and Handkerchief, which featured a "trick track" gimmick whereby the second side contained separate grooves both featuring entirely different material; playing randomly depending upon where the needle dropped, the gimmick effectively created a "side three."
A 1973 British tour yielded Live at Drury Lane, released in 1974 to coincide with the film Monty Python and the Holy Grail; the movie's companion record, The Album of the Soundtrack of the Trailer of the Film of Monty Python and the Holy Grail, a reprise of screen material along with new skits, did not appear until the next year. After 1976's Live! At City Center, a long hiatus followed before the group reunited for the 1979 feature and soundtrack Monty Python's Life of Brian.

*The Python programming language by Guido van Rossum is named after the troupe, and Monty Python references are often found in sample code created for that language.
*Seven asteroids are named after Monty Python: 9617 Grahamchapman, 9618 Johncleese, 9619 Terrygilliam, 9620 Ericidle, 9621 Michaelpalin, 9622 Terryjones, and 13681 Monty Python.
*In 2006, Ben & Jerry's, known for their "celebrity flavours", introduced to the line-up "Vermonty Python", a coffee liqueur ice cream with a chocolate cookie crumb swirl and fudge cows.

The group's third studio album in its original packaging is a find for fans of vinyl trickery: the B-side contains two continuous tracks, leaving the stylus a 50-50 chance at playing the track you want. The group reprises several skits from the show ("Bruces," "Cheese Shop") without the hindrance of playing to a live audience: in essence, it's lightning fast and witty to boot. Most of the Pythons came from a tradition of radio skit comedy, so they are not out of their depth, and are as liable to play with the conventions of recorded sound as the Firesign Theatre, their American contemporaries (though the Pythons never attempted on record anything like the concept albums of Firesign). Of the originals, "Novel Writing" (literature broadcast as sport) and "Word Association Football" (John Cleese at his densest) are winners. Ex-Bonzo Dog Band member Neil Innes also provides music on the bizarre "Background to History" in which dissertations on Medieval English farming are sung in the style of Bob Marley, Gary Glitter, and Joe Cocker.