Today's artist is a songwriter, multi-instrumentalist, and composer who was influential in the Tropicália movement of 1960s Brazil. He began his career together with Caetano Veloso, Gilberto Gil, Gal Costa, and Maria Bethânia. As a composer, he influenced Caetano and many others and delivered an expressive body of work through his own discography. A restless thinker, he was adept at modern erudite music experimentations, yet he was always ignored by both industry and audiences until he was discovered by David Byrne. He can be better understood through his self-coined definition: "I don't make art, I make spoken and sung journalism."... ........N'Joy

Tom Zé, born Antônio José Santana Martins, 11 October 1936 in Irará, Bahia, Brazil. Tom Zé grew up in the small town of Irará, Bahia in the dry sertão region of the country's Northeast. He would later claim that his hometown was "pre-Gutenbergian", as information was primarily transferred through oral communication. As a child, he was influenced by Brazilian musicians such as Luiz Gonzaga and Jackson do Pandeiro. Zé became interested in music by listening to the radio, and moved to the state capital of Salvador to pursue a degree. He later relocated to São Paulo and began his career in popular music there.

Much of his early work involved his wry impressions of the massive metropolitan area, coming as he did, from a small town in the relatively poor northeast. Influential in the Tropicália movement, Zé contributed, along with Caetano Veloso, Gilberto Gil, Gal Costa, Os Mutantes, and Nara Leão, to the watershed Tropicália album/manifesto Tropicália: ou Panis et Circenses (1968). He also participated in a series of concerts with the musicians. After the Brazilian military government of the 1960s began to crack down on the musicians of Tropicália, Zé moved out of the public eye and began to experiment with novel instruments and composition styles. While the other major figures of Tropicália would go on to great commercial and critical success in later decades, Zé slipped into obscurity in the 1970s and 1980s.

In 1969, he performed in Rio and São Paulo with Gal Costa in the show O Som Livre de Tom Zé e Gal Costa. In 1970, he recorded Tom Zé through RGE. The next year, he opened a music course in São Paulo, Sofist Balacobaco -- Muito Som e Pouco Papo. In 1972, he recorded Tom Zé through Continental, followed by 1973's Todos os Olhos, 1976's Estudando o Samba, and 1977's Correio da Estação do Brás, all for the same label. In 1974, he gave a concert with the band Capote in São Paulo. In 1975, he worked on the Brazilian staging of The Rocky Horror Picture Show as an actor. In 1976, he toured the university circuit with Vicente Barreto. In 1984, he went to RGE, where he released Nave Maria, and Continental re-released 1972's Tom Zé as Se o Caso é Chorar. In all this time, he continued to make sporadic appearances, but was still almost completely ignored by the masses due to his unusual approach to music with plenty of irony, erudite music references, and utilization of self-made instruments. Zé was so depressed that he decided to return to his small hometown to work at his nephew's gas station.

In the early 1990s, Zé's work experienced a revival when American musician David Byrne discovered one of his albums, Estudando o Samba (1975), on a visit to Rio de Janeiro. Zé was the first artist signed to the Luaka Bop label and has so far released a compilation and two albums.His releases there would get favorable reviews in The New York Times, The Village Voice, Rolling Stone, Billboard, and Le Monde, and win a Creativity Award in Telluride, CO. In 1991, his album The Best of Tom Zé was voted the third best album by critics and fourth by the readers of Down Beat. In 1992, he recorded The Hips of Tradition (also on Luaka Bop) and participated in the Zurich Jazz Festival in Switzerland. He then departed for a successful series of tours in Europe and the U.S.

He is the first Brazilian musician to be presented at New York's Museum of Modern Art (1993), and the first Latin American composer to be presented at the Walker Art Center in Minneapolis, MN. He also opened a concert at the London International Festival of Theatre at Queen Elizabeth Hall in London, England. He appeared in concert and at festivals in Canada (Vancouver, Montreal, Edmonton, Saskatoon) and New York, and received 20th Century Artist honors and performed at Summerstage in New York's Central Park. Com Defeito de Fabricacao (Fabrication Defect) In 1994, he worked on the film Sábado (Ugo Giorgetti) and toured through Europe including the Netherlands, Germany, Switzerland, and France.

In 1995 and 1996, he toured the biggest capitals of Brazil. In the same year, he wrote (together with José Miguel Wisnik) the Parabelo soundtrack for Grupo Corpo (a modern ballet company), which brought them the APCA award. In 1998, Com Defecto de Fabricacao (Fabrication Defect) was released by Luaka Bop, followed by Postmodern Platos Remixes to close out the decade in 1999. To begin the new millennium, Warner Music Brazil released one compilation entitled Enciclopédia Musical Brasileira, which was followed by Jogos de Armar in 2000. Grupo Corpo: Sanaugustin, a collaboration with Gilberto Assis, followed in 2002. In 2006 the pair teamed up again for the confusingly titled Santagustin. In 2005, Zé released Estudando o Pagode, and in 2006, Danc-Eh-Sa: Danca dos Herderieros do Sacrificio. Imprensa Cantada 2003 was finally issued in 2007, and in 2010 Luaka Bop released a new album in Estudando a Bossa, as well as a limited-edition 180-gram LP box set containing the albums Massive Hits (Estudando o Samba), Estudando o Pagode, and Estudando a Bossa, as well as a 7" collaborative single with Tortoise and a CD containing a conversation between Zé and David Byrne.

Remaining true to the experimental and Dada impulses of Tropicália, Zé has been noted for both his unorthodox approach to melody and instrumentation, employing various objects as instruments such as the typewriter. He has collaborated with many of the concrete poets of São Paulo, including Augusto de Campos, and employed concrete techniques in his lyrics. Musically, his work appropriates samba, Bossa Nova, Brazilian folk music, forró, and American rock and roll, among others. He has been praised by avant-garde composers for his use of dissonance, polytonality, and unusual time signatures. Because of the experimental nature of many of his compositions, Zé has been compared with American musicians such as Frank Zappa and Captain Beefheart.

For those that aren’t familiar with Tom Zé, this is the perfect album to be introduced to his amazing work. Zé is a songwriter, multi-instrumentalist, innovator and composer who was hugely influential in the Tropicália movement of 1960s Brazil. You may hear him described as Brazil’s answer to Zappa or Captain Beefheart; as like them Zé is a true innovator and a true artist.

This, Tom's self-titled second solo album, was originally released by RGE Discos in 1970. Continuing in a similar musical vein to Grande Liquidicao, ‘Tom Ze’ is a wonderful combination of guitars, layered percussion and tough rock ’n’ roll, underpinned by Ze’s instantly recognizable vocal. Ze is infact one of Brazil’s most sampled artists. ‘Jimmy, renda-se’ has one of the most recognisable intro’s you will hear so it was no great surprise that Ameriie sampled it for her smash ‘Take Control’. All in all, another essential record from a true legend of Brazilian music. 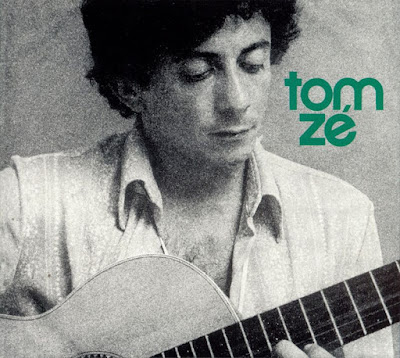 A surrealistic 1972 album from one of the greatest overlooked geniuses of Brazilian music. Tom Zé is one of the most shining examples of avant-garde invention in Latin music, next to Caetano Veloso and Jorge Ben. This album is more on the downbeat folk singer/songwriter tip than the rigorous avant-garde experimentation of his late-'70s period or his '90s revival. This self-titled album remains, in its own right, an exquisite collection of lyrical twists and delicate bossa nova tunes that should be tracked down by collectors of Tropicalia. Numerous tracks from this album were anthologized on David Byrne's excellent Brazil Classics series, but the album in particular didn't get reissued officially until 2002. The album displays a different side to his quirky genius, with more attention given to the text than to the idiosyncratic rhythm structures which are the signature of his work. 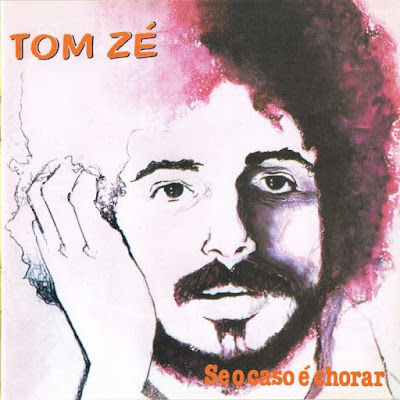 The joke with this one is that the album art, which looks like an eyeball, is actually a photo of a marble shoved up someone's anus - a little jab at the Brazilian dictatorship's office of censorship, which apparently didn't recognize a mirror when they saw one. Ze's nutty side comes dancing to the fore here, with some of his more playful, deliberately challenging arrangements. Lots of clinky, clattering percussion, dangling guitar notes and a spiritedly goofy vocal chorus. You may recognize several of these songs from the Luaka Bop collections, but if you like Ze's stuff, the album itself is a must-have, since a lot of this is not collected on the Byrne comps. 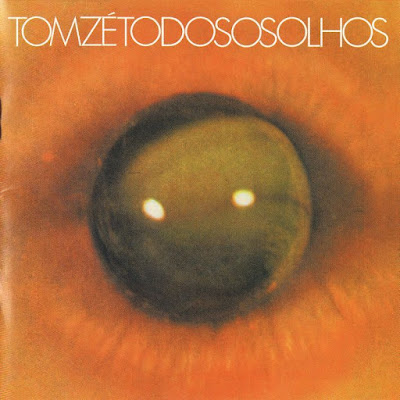 Estudando o Samba is a concept album by Brazilian singer Tom Zé, recorded in 1976. Released in 1976, the album didn't receive much attention from the Brazilian press. Estudando o Samba surveys Brazilian music's largest genre, the samba, while approaching the music with the same creativity Zé had shown with his previous album, "Todos os Olhos". Quote ''I don't make art, I make spoken and sung journalism.'

It was listed by Rolling Stone Brazil as one of the 100 best Brazilian albums in history. 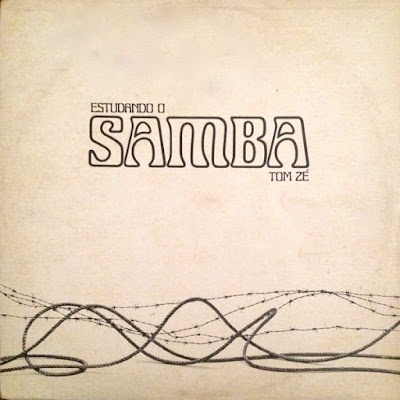 the music seletion you post on your blog is superb (once again!)

if it's possible, would you please give "Tom Ze - Se O Caso É Chorar" a reupp ?

ofc, I'd be interested in the other as well..

thanks in advance, have a nice sunday!

thanks for fulfilling my request, you're the man.
as a matter of fact, i saw many of my requests reupped by you.. thanks a lot!