Another Monty Python Record, released in the U.K. in 1971, made its American debut the following year; for most U.S. fans, the album was their first exposure to the troupe -- the BBC series did not begin appearing on public television outlets for several more months. After 1972's Monty Python's Previous Record, a mixture of original routines and TV material featuring "Eric the Half a Bee," "The Argument Clinic," and "Embarrassment/A Bed-Time Book," the group issued 1973's Matching Tie and Handkerchief, which featured a "trick track" gimmick whereby the second side contained separate grooves both featuring entirely different material; playing randomly depending upon where the needle dropped, the gimmick effectively created a "side three." 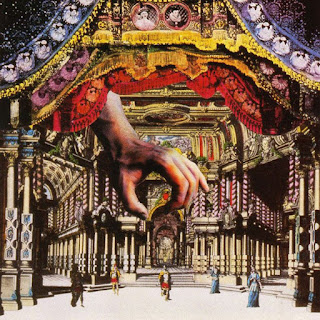 A 1973 British tour yielded Live at Drury Lane, released in 1974 to coincide with the film Monty Python and the Holy Grail; the movie's companion record, The Album of the Soundtrack of the Trailer of the Film of Monty Python and the Holy Grail, a reprise of screen material along with new skits, did not appear until the next year. After 1976's Live! At City Center, a long hiatus followed before the group reunited for the 1979 feature and soundtrack Monty Python's Life of Brian.

*The Python programming language by Guido van Rossum is named after the troupe, and Monty Python references are often found in sample code created for that language.
*Seven asteroids are named after Monty Python: 9617 Grahamchapman, 9618 Johncleese, 9619 Terrygilliam, 9620 Ericidle, 9621 Michaelpalin, 9622 Terryjones, and 13681 Monty Python.
*In 2006, Ben & Jerry's, known for their "celebrity flavours", introduced to the line-up "Vermonty Python", a coffee liqueur ice cream with a chocolate cookie crumb swirl and fudge cows.

After concluding work on the fourth and final series of Monty Python's Flying Circus, writer/actors Michael Palin, Graham Chapman, John Cleese, Eric Idle, Terry Jones, and Terry Gilliam adapted many of the classic sketches for the stage. This album commences with a faux sincerely toned "Introduction" from Idle in the role of narrator, as he observes: "...Amongst the glittering audience here tonight I can see, uhm...oh...what's his name, uhh, the...the fellow with the glasses on the telly. And next to him is, uhm...oh, uh, the lady with the big knockers in the jam commercial." There are notable variations between the scripts used for the TV show and the dialogue incorporated during live performances. Additionally, this disc includes a few items that were presumably created for the staged show. Among them are former Bonzo Dog Doo Dah Band member and part-time Python Neil Innes' "Idiot Song," "Secret Service," and the remarkable physical comedy involved in "Wrestling," which is countered by an equally silly color commentary from Cleese. Many of the better-known titles ("Communist Quiz," "Nudge, Nudge," "Lumberjack Song," "Pet Shop," "Albatross," and "Colonel") date back to some of the earliest episodes and have clearly become favorites of those in attendance. The core of their set remained intact when the Pythons brought the show stateside in 1976. However, as their other concert album, Live! At City Center (1976), demonstrates, there are subtle differences in delivery and pacing, as well as a few new links such as "Short Blues" and Innes' brilliant "Protest Song" from Rutland Times (1976), a conceptual collaboration with Idle that would ultimately yield the sublime Beatles parody and mockumentary All You Need Is Cash (1978). Live at Drury Lane is a great place for Python enthusiasts to start and revisit, as the presence of a live crowd progresses the humor to a new strata that is absent from the comparatively sterile TV versions.