Today's artist is a Brazilian singer, songwriter, actor, and painter active for more than 70 years beginning in 1933. He contributed to the birth of Brazil's bossa nova movement, and several of his samba pieces, such as "Samba da Minha Terra", "Doralice" and "Saudade da Bahia", have become staples of Música popular brasileira. Equally notable are his ballads celebrating the fishermen and women of Bahia, including "Promessa de Pescador", "O Que É Que a Baiana Tem?", and "Milagre". Caymmi composed about 100 songs in his lifetime, and many of his works are now considered to be Brazilian classics. N'Joy

If one were to look for a geographical region in Brazil that resembles the Mississippi Delta in terms of producing a lion's share of influential performers, a good case could be made for the region of Bahia in Brazil's northeast. The list of Bahian performers is formidable: Caetano Veloso, Gilberto Gil, Gal Costa, Maria Bethania, etc. What links all of these people is the influence of Dorival Caymmi perhaps the single most important composer to come from this region.

Caymmi was born in Salvador, Bahia, to Durval Henrique Caymmi, the great-grandson of an Italian immigrant, and Aurelina Soares Caymmi, a native Bahian. He had two younger sisters, Dinahir and Dinah, and a younger brother, Deraldo. His father, a civil servant, often played the piano, guitar, and mandolin at home, and his mother, a housewife, sang regularly. He participated in his church's choir for much of his childhood. At age 13, he left school to work as a journalist at Bahian newspaper O Imparcial. When O Imparcial went out of business two years later, he took up work as a street vendor.

Although he never formally studied music, Caymmi taught himself to play guitar in the late 1920s and began to compose, sing, and play his own songs on Bahian radio programs around 1930. He first achieved widespread recognition in 1933, when at age 16, he composed the song "O Que É Que a Baiana Tem?" ("What Is It About Bahian Women?") for singer Carmen Miranda. In 1936, at age 22, he won a songwriting contest at Salvador's annual Carnaval celebration. His prize was a pink satin lampshade. Despite his early musical success, he moved to Rio de Janeiro in 1938 with intentions to pursue a law degree and to return to working as a journalist. While employed there by the newspaper Diários Associados, he spent his spare time composing and singing songs on the radio show Dragão da Rua Larga. His popularity began to grow with the show's audience.

Many of Caymmi's lyrics pay homage to the lifestyle, beaches, fishermen, and women of his native Bahia. He drew much of his inspiration from music indigenous to northeastern Brazil, especially Afro-Brazilian music and samba. He recorded for more than five decades and released about 20 albums, sometimes singing and playing guitar as a soloist and at other times accompanied by bands and orchestras. Although active for the better part of the 20th century, Caymmi wrote only about 100 songs. Despite having a relatively small body of work, Caymmi held a reputation for composing songs of exceptional quality. He occasionally collaborated with Jobim, who called him a "universal genius" and Brazil's greatest composer. Many contemporary Brazilian artists, including Caetano Veloso, Gilberto Gil and Beth Carvalho cite Caymmi as a significant influence on their music.

"O Que É Que a Baiana Tem?" gained even more fame in Brazil when Miranda performed it in the 1939 film Banana-da-Terra, and it was this song that garnered her international attention and helped launch her career. After this success, Caymmi began to focus more on making music, and he wrote songs that appeared in other Brazilian films. In late 1939, he signed with Odeon Records and recorded his first three singles. In the 1950s and 1960s, Jobim, João Gilberto, and others who contributed to the birth of the bossa nova style collaborated with Caymmi and often referenced his work when composing their own pieces. During this era, Gilberto covered several of Caymmi's songs, including "Rosa Morena" ("Dark-skinned Rose") and "Saudade da Bahia" ("Longing for Bahia"). Jobim was particularly enamored of Caymmi's music, and the two grew to be close friends.

Caymmi was a lifelong friend of Bahian author Jorge Amado, and in 1945, he set one of Amado's politically driven poems to music to aid the senatorial campaign of Luís Carlos Prestes.[1][4] In the late 1970s, Caymmi again took inspiration from Amado when he composed "Modinha para a Gabriela" ("A Little Song for Gabriela"), a musical adaptation of Amado's novel Gabriela, Cravo e Canela.

To thank Caymmi for bringing international attention to Brazilian music and culture, in 1968, the governor of Bahia presented Caymmi with a house in Salvador, and so he returned to live in his hometown for a short period of time. In 1972, Caymmi was awarded the Order of Merit of the State of Bahia, an order given to Bahian residents for excellent service to the state. In Caymmi's case, the service was bringing pride and honor to Bahian people through the widespread dissemination of his music about life there. On Caymmi's 70th birthday, in 1984, French Minister of Culture Jack Lang presented him with the Ordre des Arts et des Lettres, a French order that recognizes significant contributors to the fields of art and literature, in Paris. The following year, a new street named Avenida Dorival Caymmi (Dorival Caymmi Avenue) opened in Salvador. In 1986, Rio de Janeiro's famed Mangueira samba school based its Carnaval performance on Caymmi's life and work, and the school won the annual parade-style samba competition. In 2015, his tribute album Centenário Caymmi was nominated for the 16th Latin Grammy Awards in the Best MPB Album category.

Although Caymmi earned his fame through music, he was also known to a lesser degree for his paintings. From 1943 to 1945, he regularly attended a drawing and painting class at the Escola de Belas Artes, a fine arts school in Rio de Janeiro. Even after discontinuing his formal study, he painted for the rest of his life. He practiced Candomblé, an Afro-Brazilian religion characterized by belief in spirit-gods and ritualistic practices involving mediumship. Candomblé was his father's religion, and Caymmi gradually involved himself more with it as an adult, when his friends invited him to accompany them to religious ceremonies and parties. Caymmi was also a naturist, and when he was in Bahia, he liked to bathe nude in the Lagoa do Abaeté

While working at Rádio Nacional in 1939, he met Brazilian vocalist Adelaide Tostes, who is better known by her stage name Stella Maris, and the two married in 1940. Tostes responded to a 1994 press query about Caymmi's habit of frequenting bars with a short story: "One night I went to look for him in a bar ... He was surrounded by women. I went in and slammed a table. A glass broke. The bouncer came, and I punched Caymmi's face. Then I left cussing. I thought he was involved with drugs, but it wasn't the case. He was with the tramps." Despite such incidents, however, they remained together for 68 years, until his death in 2008. The couple had three children, Nana, Danilo, and Dori, all of whom followed their father into musical careers. Dorival Caymmi died at age 94 of kidney cancer and multiple organ failure on August 16, 2008, at his home in Copacabana, Rio de Janeiro.

Dorival Caymmi – arguably one of the true fathers of Brazilian music from the 60s onward! This is a record that's filled with early compositions that went onto become standards of Brazilian song – the kind of tunes that have been recorded often by others over the years, presented here in key original versions ! . Eu Nao Tenho Onde Morar is magical early work from Dorival Caymmi – and the kind of record that easily shows why he was such a huge influence on Brazilian music! The album bubbles along with a lively mix of samba and larger orchestrations – Caymmi's wonderful vocals and songs filling up the set with a sense of tone, color, and life that surpasses most other popular Brazilian albums of the time. Titles include "Rosa Morena", "Acontece Que Eu Sou Baiano", "O Dengo Que A Nega Tem", "Vizinha Do Lado", "Marina", and "Sao Salvador Accompanied by the Quartet in Cy and the set of Oscar Castro Neves , Vinicius de Moraes and Dorival Caymmi they packed the nightclub Zum Zum in Copacabana , in a series of concerts held between 1964 and 1965 . As there was no way to record live LPs that time, "Vinicius and Caymmi at Zum Zum" was produced in the studio. - With classics like "The Creation Day," "Taiwan" and "Bud Friend" Baden Powell makes an appearance on the album getting next to Vinicius de Moraes in all the songs. 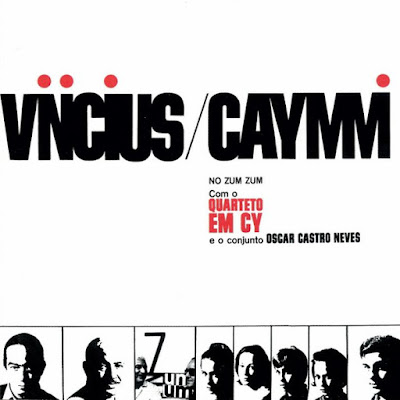 Songwriter Dorival Caymmi was one of the key figures in the history of samba-cancao pop... He wrote many classic songs, including some of Carmen Miranda's hits in the 1940s. Caymmi continued recording well into the 1950s, '60s and '70s... The presentation here is certainly a big step forward from the over-the-top pop-orchestrations that plague many of his earlier albums. Its certainly very interesting to hear a different texture of music behind him. The results are generally very positive, not just because of the backing band (the percussion is exceptional, but I'm still not sure about the backing singers), but mostly because of Dorival himself, who plays and sings as well here as on any recording, and also the production in general being much better than most of the 1950s albums.This is a reissue of an unusual album from 1972 that features lots of traditional Afro-Brazilian oba drumming and Bahian candomble music. It's very different from Caymmi's acoustic guitar-based music of earlier decades. If you liked Virginia Rodrigues's use of candomble rhythms in her albums of the 1990s, you might also want to check this album out. 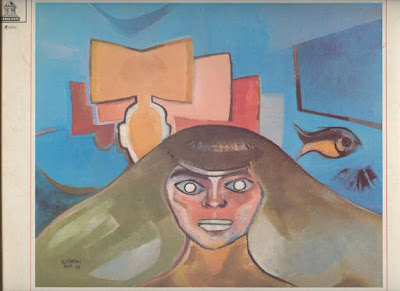 This is Dorival Caymmi – Caymmi (1985), recorded by Fundacao Emilio Odebrecht to celebrate Dorival Caymmi 70th anniversary in 1985. This is not a commercial album, distributed only to Fundacao Emilio Odebrecht customers. Caymmi is 100% made of new recordings with Dorival Caymmi and his violao on the first LP and Dorival Caymmi with Maestro Radames Gnattali on the second LP. The phonographic content would be unheard of until 1997, when he received an edition cd. But we can say that since it is a material out of print and therefore deserves our attention. This album was a production that involved Caymmi himself. He brings, of course, some of the many and most famous of his compositions. Caribé testimonials, Jorge Amado, Tom Jobim and Caetano Veloso. To complete the dish, special spices: a team of very first musicians, starting with the principal conductor and arranger, Radames Gnattali. 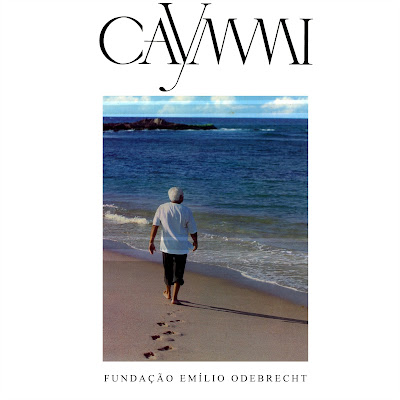