Today more from Mali, after all it has one of the most intensely musical cultures in all Africa. Today's band was one of the first West African acts to combine this mature Afro-Latin sound with traditional instruments and styles. In their case, this was built upon the Mande Griot praise singer tradition, along with Bambara and other Malian and Guinean musical traditions. Their distinctive sound came from combining electric guitar and jazz horns with soaring Mandinka and Bamabara lyrical lines, African and western drums, and local instruments such as the kora and the Balafon. At their height of fame in the 1970s, they played to sold out venues and even stadiums across West Africa, and launched solo careers for many of its members, including the legendary vocalist Salif Keita........N'joy

The Super Rail Band, or the Super Rail Band of the Buffet Hotel de la Gare, Bamako, to give them their full name, might be Mali's best-kept secret. Loved by world music cognoscenti, they've never found a general audience, due in large part to having only a few, poorly-distributed records. But as well as being an incubator for some of the country's great singing talent, they've also become an institution and a legend.

It all began in 1970, when Mali's Ministry of Information decided to sponsor a band in the country's capital, Bamako. Since Mali gained independence in the early '60s, the government had sponsored music to emphasize the local culture, but now it was cutting back on some of the programs, and this seemed a cheap alternative to the more ambitious plans. They had a venue -- the Buffet Hotel at the city's train station -- and with the musicians in place, the gigs became regular events.

The first lineup centered around guitarist Djelimady Tounkara, who remained a constant throughout the band's tenure, and original singer Salif Keita. The albino Keita, whose lineage was that of royal blood, was so embarrassed by his albino looks and to be doing a griot's work of singing at their first show, that he sang from the back of the stage with a towel over his head. The band worked in the Malian Manding tradition, with some touches of Congolese rumba, and became a smash, thanks to the mix of vocals and long workout instrumentals, where Tounkara quickly established himself as one of the continent's best axemen -- the equivalent of any Western guitar god. Keita quickly adjusted to being on display, and soon was one of the centerpieces of the band with his high, wailing voice, leaving two years later to start a rival group, Les Ambassadeurs du Motel.

He was replaced by another great voice, Mory Kante, who would go on to become a major solo star. The tenure of the first two vocalists was commemorated on Rail Band, where the none-too-hi fidelity recordings still managed to capture the energy of the ensemble on griot classics like "Soundiata." However, they essentially remained a live, local group, and it wasn't until 1985's New Dimensions in Rail Culture, on the Globestyle label, that they were properly recorded. By then the band had turned over personnel, with a new set of singers and players behind Tounkara.

As the popularity of world music increased in the late '80s and early '90s, the Rail Band became known by critics and lauded. But their music wasn't widely available, which meant that the general public never had much chance to become acquainted with their very sophisticated sound. A U.S. tour in 1990 helped somewhat, but with no follow-up and no new product, any momentum they had was lost. the Rail Band didn't return to the studio until 1994, releasing Djoungouya Magni on the French Indigo label, then releasing Mansa, also on Indigo, a year later. Mansa was by far the best recording they'd made, both sonically and musically, capturing the full range of their sound, from the griot epics to the funk they'd taken on board over the years, and even incorporating touches of jazz in the antiphonal phrasing between Tounkara's guitar and the horns. Since then they've toured in Europe, but released no more recordings, although Tounkara was the central figure in author Banning Eyre's book In Griot Time.

A project to chart the history of Mali's possibly greatest band is ambitious, and this double set covering the early years makes for a very satisfying start. Fully named the Rail Band du Buffet Hotel de la Gare, the Bamako group set up in the hotel by the train station. What's apparent is the very strong Latin influence that pervaded their formative period, evident in the first of three versions on the title cut on here, with Salif Keita, who was with the group from 1970 to 1975, already fully developed and in superb voice as a singer.

A sweet selection of classic West African electric guitar music from the early 1970s, featuring future solo stars Mory Kante and Salif Keita as part of the large band... If you love the languid, hypnotic sound of this style of guitar music, but sometimes wish the songs could last forever, then this 2-CD set has some pleasant surprises for you: there are several long tracks on here, including the title track, "Soundiata (L'Exil)," which clocks in at nearly 28 minutes long -- worthy of an Indian raga! It's all really sweet stuff, too, with some of the most mellifluous sax'n'brass work I've heard in African pop.


Just how things changed is shown in the lengthy 1975 version of "Belle Epoque," with Mory Kante then the lead singer, with the song taking on a much more African sound (although the Cuban influence is still strong in other material from the period, such as "El Manicero"). The linchpin of the group is probably Djelimady Tounkara, who'd become lead guitarist, and whose work is inspirational, inventive, and fluid to a remarkable degree -- just listen to "Maliyo," a cut from the late '70s, where his fretwork absolutely shimmers. On the basis of this, the next two volumes will be real treats.

Rather than mark this state-sponsored band's trajectory chronologically, these sets alight on three distinct phases. There's the band's formative start, wherein singer Salif Keita grew to be a superstar, as well as the albums made directly after Keita's departure, when balafon/ kora player Mory Kante took over the vocal duties. The third phase documents what music was made when Kante and virtuosic guitarist Djelilmady Tounkara were fired from the band. All three phases of the Rail Band's career are amply documented, from the Keita-led ebullience of "Rail Band" and "Gansana" to the more languid and jazz-inflected "Demba" and the group vocals of "Balakononifing." Needless to say, the Rail Band's music is a long train running. 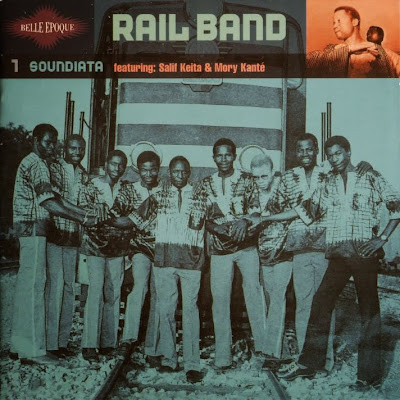 The second instalment of Sterns' three-part Belle Epoque series focussing on the great Malian musical institution, the Rail Band, a group of musicians featuring such stars as Salif Keita and Mory Kante who were so-called because of their sponsorship from the national railway administration. Imagine that in this country: the results would be something along the lines of Network Rail Presents Razorlight, or something abominable like that. Quite on the contrary, the Rail Band have gone down in history as one of Mali's most successful and revered groups, featuring a variety of line-ups that have incubated and nurtured some of the country's finest music stars. Although the roots of the band's music are very much traditional, as with so much African popular music, by the time the '70s arrived, fusions and cross-genre styling was on the cards thanks to an increased availability of western music, and so alongside kora and balafon arrangements electric guitars and jazzy horns begin to emerge. In fact, a special mention should go to the lead guitar talents of Rail Band staple Djelimady Tounkara, whose light shines especially brightly on pieces like 'Finza'. 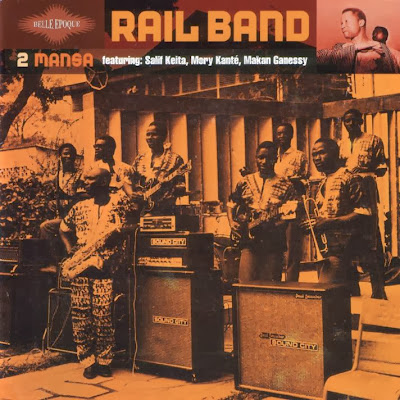 k It happens now and then - i forget to enter the link- have rectified that. As for track 6 Konowale missing, i can say no it isn't-even downloaded it myself to verify.

Thanks again Rho for your tremendous efforts! Will we see part 3 too?

thank you for these posts. loving pt 1 as i listen to it right now.

Hello Rho!
To complete your posts of the railband, it would be great to have your re-up of the following

Thank you in advance

Hello Rho!
Many thanks for your last re-ups.
I'm not a real friend of the music of Mali but I whenever possible I attended the concert of the Rail Band.

It would be nice, if you could re-up:

Many thanks in advance, all the best / Thomas