Hello, we're still in the On U sound corner here with a mixed bag of sorts a special attention is needed for Little Annie, who's album here would have been a big seller if she'd been pushed by a big label, it really is a still very much enjoyable album, testament to her offbeat of the times i guess.

For music fans coming fresh to the Barmy Army's The English Disease the appeal would obviously be the set of tough rhythms with their origins in reggae and funk. Perhaps the substance of the "lyrics" and the many references to the contemporary football issues of the late eighties may bypass those who do not also hold an abiding interest in the beautiful game Either way, what we have here is yet another edition in what can now be recognised as an ongoing series of On-U Sound unofficial documentaries. Previous subjects have included mental health, conspiracy theory, the global hegemony of multinational corporations, B.S.E., the use and abuse of technology, the perverse nature of organised religion. But, of course, football is more important than all of these.

The release of the vinyl version of The English Disease in October 1989 was prefaced, as On-U's premier football venture, by Tack>>Head's The Game in early 1987 featuring the voice of ITV football commentator Brian Moore, alas not included on the album (mistake)

Etched on the 12" copy of the Fourth & Broadway single was the legend - Where's the Barmy West Ham Army? West Ham United are supported by, amongst a few thousand others, Adrian Sherwood. The Barmy Army was the militant faction of the East End team's supporters who, on the odd occasion, tended to be rather over-enthusiastic in their chosen form of encouragement in support of the boys.

Recorded at a time of social paranoia when the Thatcher years were drawing to a close, football was under unprecedented scrutiny. Identity cards, the destruction of the traditional terrace, hooliganism ("the English disease"), policing standards, a return to family values - the game was becoming, to coin a phrase, a political football! Sherwood resisted the obvious temptation of an easy shot by turning out a strictly Hammers polemic but focused instead on producing a passionately political sonic documentary where supporters from across the football spectrum joined together in a joyful celebration of the game whilst levelling a number of incisive jibes against the game's establishment, both at club and organisational levels."Instead of trying to represent a locality, region or sub-culture, Sherwood's mix ..... captured a blend of passion, pride, regionalism and nationalism by deconstructing, and then reconstructing, the various diverse elements. Not representation so much as presenting the unpresentable". On listening back to The English Disease the radio and TV samples together with the terrace chants almost, in fact do, take on an anthropological slant. There is little, if any difference in the use of such source material as compared to the ethnic and tribal material to be found on the albums of African Head Charge 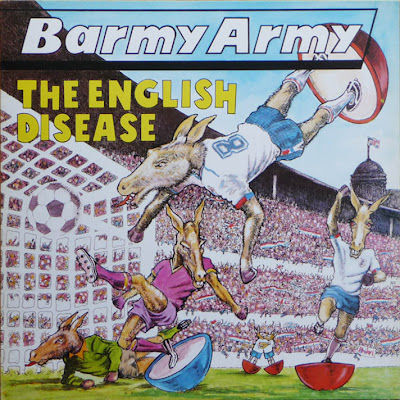 Little Annie Bandez (also known as Annie Anxiety or Little Annie Anxiety Bandez) is an American singer, songwriter, painter, and stage actor.
Little Annie began her musical career at Max's Kansas City, with Annie and the Asexuals. Upon moving to the UK, she began working with Penny Rimbaud and Crass. She has recorded extensively with vanguard figures of twentieth century underground rock, such as rock musician Kid Congo Powers, dub stalwart Adrian Sherwood, punk/experimental band Crass, experimental/electronica band Coil, and Nurse with Wound. She's written three works of prose, is a prolific and successful painter, has appeared in numerous plays and films. She has released several albums of her unique hybrid of post-punk, jungle, dub, hip-hop, and avant-garde, first as Annie Anxiety for 1984's Soul Possession and 1987's Jackamo (both on On-U Sound) and then as Little Annie for Short and Sweet (On-U Sound, 1992), Short, Sweet and Dread (On-U Sound, 1995), Diamonds Made of Glass (Streamline, 2001), Little Annie & the Legally Jammin' (Italic, 2003),

In 2006 she released Songs from the Coalmine Canary on the Durtro / Jnana label, it was co-produced by Antony Hegarty, of Antony and the Johnsons, and Joe Budenholzer of Backworld. Hegarty also played piano, sang backup vocals and co-wrote several songs on the album. The song "Strangelove", co-written by Little Annie and Hegarty, was used as the soundtrack for Levi's "Dangerous Liaisons" advertising campaign in 2007, garnering several awards, including the Cannes Lions.

Little Annie has performed on stage with Marc Almond, supporting him in 2007 in several appearances at Wliton's Music Hall, where she performed with pianist Paul Wallfisch. In 2008 she and Wallfisch recorded the album When Good Things Happen to Bad Pianos, which includes a cover of U2's song "I Still Haven't Found What I'm Looking For". In 2010 Annie and Paul released their second album, Genderful through Southern Records.


Off the wall, weird, BUT really cool.

Bassist and songwriter Steve Swann and keyboardist Richard Patterson had been on the British reggae scene for almost ten years with various other bands and had several EPs and indepently released full-length releases under their belts when they made their first album under the name Revolutionary Dub Warriors for the On-U Sound label in 1994. With drummer Kevin Maxwell and percussionist Paul Tillotson, they crafted a sound that was a natural match for On-U label head Adrian Sherwood's unique approach to the dub tradition: heavy and rootsy, incorporating much more of the classical 1970s reggae sound than the digital dancehall influence, yet modern and rhythmically propulsive at the same time. The rhythms are solid and competent, but they are consistently unoriginal; while "Dub the E" incorporates some Middle Eastern vocal samples to nice effect, tracks like "Industrial" and "One Drop" meander aimlessly and fail to develop the musical ideas upon which they're built. What makes the album worth hearing is Sherwood's typically off-the-wall production style, which takes established dub techniques and exaggerates them to sometimes jarring effect. Members of On-U Sound's enthusiastic cult following will enjoy this album, but it won't make a very effective missionary tool. 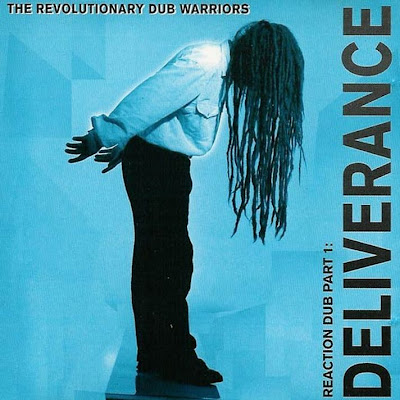 Hello Rho!!!
Could you reup "Short, Sweet and Dread" by Little Annie?
Thanx!!!