Hello, enough of those Aetix samplers for the moment, i do have some in hand for later. Today is all about John Wardle who's name got garbled to Wobble by a drunk mate unable to pronounce it John liked it added the reggae tinge Jah and you get Jah Wobble now that's easy enough to pronounce and remember and so it stuck. He's been a busy boy for the last 30 years even though he got of to a relative slow start (usually it's the other way around). He likes to collaborate with others and the list has become very long over the years, I'm planning a Sundaze post as well soon. N'joy

Jah Wobble (born John Wardle)  got his musical career started with John Lydon's post-Sex Pistols group Public Image Ltd (PiL). His trademark bass playing drew heavily on dub, which has remained an important feature of his music. Wobble left his signature mark on PiL's seminal second album Metal Box released in 1980. However, he grew increasingly frustrated by the lacklustre creative atmosphere in the band, besides differences in artistic vision, further conflicts were brought on in part by heavy drug and alcohol abuse in the band . Wobble then went on to recording and releasing his debut album The Legend Lives on - Jah Wobble in Betrayal, and found himself accused by other PiL members of having made unauthorized use of material from Metal Box for the making of Betrayal, there upon he then left PiL in late 1980.

Following his departure from PiL, he went on to a successful solo career, continuing to the present. He has has since collaborated with a wide variety of musicians, first evidence of this the 4 track ep How much are they ? (81) recorded with ex Can members, Hoger Czukay and Jaki Liebzeit. Followed in 83 with the Snake Charmer lp, however his critical stance towards the commercialization of the music industry, caused a clash and he dropped out of the music scene.

It was not until 1986, when Wobble met guitarist Justin Adams, that his creative juices began flowing again. The two hit it off musically, and began experimenting with a diverse palette of pop, dub, Middle Eastern, and North African influences. This laid the foundation for what would eventually become their new group, Jah Wobble's Invaders of the Heart. Keyboard/percussionist David Harrow and Urban Dance Squad drummer Michel Schoots joined soon after, and the quartet began earnestly working on new material. By 1987, the band had worked out a polished live set and decided it was time to take the show to the Netherlands (where Wobble still had an avid following), do a tour, and record. The result was JWIOTH's debut album Without Judgement.

The single "Bomba" brought Wobble back to the public eye in 1990, and he collaborated with Sinéad O'Connor and Primal Scream in addition to releasing the Invaders of the Heart album Rising Above Bedlam in 1991. Three years later, he released Take Me to God, which featured a number of guest appearances from the likes of Gavin Friday. In 1995, he released Psalms, which was followed in 1996 by The Inspiration of William Blake. In 1997 Wobble formed his own label, 30 Hertz, to release Jah Wobble Presents the Light Programme. Umbra Sumus appeared the following year. In 1999, Wobble released Deep Space, which featured appearances from Bill Laswell and Jaki Liebezeit.

In the new century, Wobble became prolific. His first release was Full Moon Over the Shopping Mall, issued in the spring of 2000, followed by Molam Dub that fall. Passage to Hades with Evan Parker appeared in spring 2001. In 2002, Wobble began a series of interconnected -- sometimes short-lived -- collaborative groups to execute specifically minded projects. First, Temple of Sound -- with Natasha Atlas, Nina Miranda, and Shahin Badar -- released Shout at the Devil. That same year, Solaris: Live in Concert reunited Wobble with Laswell and Liebezeit, along with pianist Harold Budd and cornetist Graham Haynes. Reed and woodwind master Clive Bell and trumpeter Harry Beckett assisted Wobble with the nocturnal club jazz that was Fly later in the year.

In 2003, he resurrected another previous group he called Deep Space. This version contained original members Philip Jeck and drummer Mark Sanders with bagpipers Bell and Jean-Pierre Rasle, Beckett, guitarist Chris Cookson, and singer Cat Von Trapp. They released the full-length Five Beats. Bell, Rasle, and Cookson would continue to play with Wobble throughout the decade no matter the band, as evidenced by the ambitious English Roots Music (credited to his Invaders of the Heart project with Liz Carter on vocals). He also cut the soundtrack to the French film Fureur (Fury) for EastWest. Wobble and pedal steel legend B.J. Cole, with Bell, Cookson, and Beckett, cut the nocturnal jazz-dub recording Elevator Music, Vol. 1A in 2004. Later that year, Trojan Records honored Wobble with a career-spanning three-disc retrospective, I Could Have Been a Contender. The dub effort MU was issued by Trojan in 2005.

In 2006 there were two Wobble offerings: the completely solo Alpha-One Three (titled for his taxi driver handle), which appeared in July, and Jah Wobble & the English Roots Band in November. The latter is interesting because after English Roots Music, these musicians became a band apart from Invaders of the Heart. This latter album was recorded live in one take in the studio to reflect the fearsome live energy of their concert performances. Trojan Records issued another of Wobble's wild takes on dub with Heart & Soul in 2007. This recording also brought Gregorian plainsong, Appalachian folk, and gospel into the mix, creating a past-future effect.

The wildest was yet to come, however, as he brought dub to the East by employing Cookson, Sanders, and Bell alongside a group of Chinese traditional musicians to create the inimitable and provocative Chinese Dub in 2008. Car Ad Music, with Cookson, Bell, Beckett, and percussionist Neville Murray, was issued in 2009, and the (mostly) solo Welcome to My World arrived in 2010. Also in 2010, Wobble moved his dub fusion toward Japan with The Japanese Dub, recorded with the Nippon Dub Ensemble (Joji Hirota and Keiko Kitamura) with Bell and Robin Thompson guesting.

Wobble was no less prolific in 2011, recording a pair of albums that are, as has become his wont, radically different from one another. The first, 7, issued on Pressure Sounds, was recorded by his Modern Jazz Ensemble as a tribute to his some of his jazz heroes -- Miles Davis, Donald Byrd, Weather Report, the Art Ensemble of Chicago, etc. The personnel include Cookson and Bell but also Marc Layton-Bennett (drums), George King (keyboards), Sean Corby (trumpet & flügelhorn), and Shri Sriram (tablas and bowed bass). The second offering of the year was a collaboration with guitarist, vocalist, songwriter, and celebrated post-punk revivalist Julie Campbell called Psychic Life, which was issued on Cherry Red in November.

The main points of grief with Wobble's debut album are his vocals -- they're awful, most resembling a liquored up Colin Newman. Another criticism is that a couple of his syrupy basslines here are nicked from his PiL work; "Not Another" and "Blueberry Hill"'s lines are straight off Metal Box, so it's no small wonder why John Lydon quickly sacked him from the band. Aside from these gripes, it remains a pretty strong record. The Legend Lives On's finer moments often occur when Wobble's mouth is shut, or when he chants rather than sings. "Today Is the First Day of The..." and "Tales From Outer Space" feature nice and queasy synth effects and ample basslines. The record is largely guitar free, submerged in white reggae. Virgin's CD reissue adds seven bonus tracks, including a horn-laden remix of "Today Is the First Day" and the likely offensive "Dreadlock Don't Deal in Wedlock." 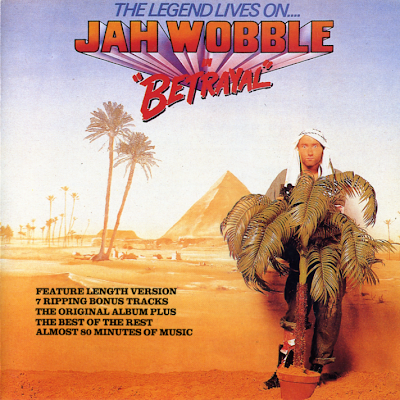 More of a Czukay album I suppose, this album is in fact an extended version of the suddessful How Much Are They EP, the rest of my Jah Wobble eighties releases i have on vinyl Bedroom album and Neon Moon but I'm unable to rip that at the moment , still if you don't have Full Circle it's well worth the attention. 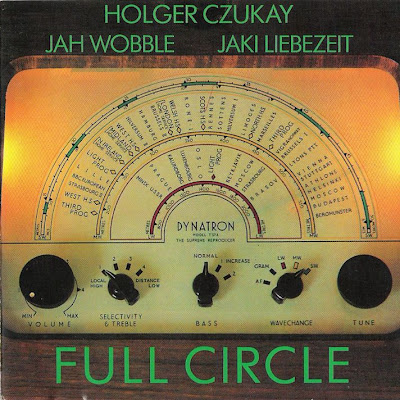 Following his split from P.I.L. in the early '80s, bassist Jah Wobble was more likely to be found sweeping tubeway stations than performing on stages, and by the middle of the decade, his musical output had all but ground to a halt.

Pieced together from live, two-track DAT recordings made during performances in Holland, the album managed to sound relaxed, free, and spontaneous while maintaining an air of calculation and precision. Unlike most live albums, the fact that Without Judgement was, indeed, recorded live was not immediately apparent. The only crowd noise present occurred during the fade-out of the last track and the album itself was edited together in such a way that full songs found themselves placed among snippets of instrumental interlude and sound atmospherics. This unconventional approach may have seemed like a recipe for disaster, but in the talented hands of editor Step Parikian, the flow between musical ideas was tasteful, seamless, and, above all, interesting. Without Judgement still shines as the toughest album Jah Wobble has made under his own name. 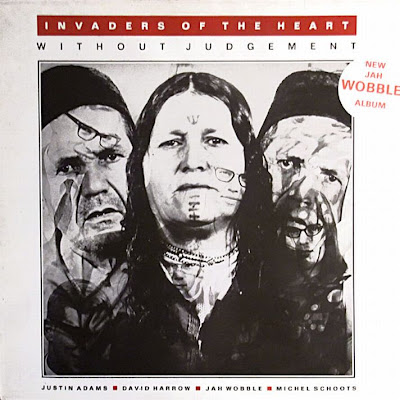 Jah Wobble!!! You made my day with these. Mucho thanks.

thanks rho
do you have the invaders of the heart 3tr EP??

I've been looking for a decent rip of his wonderful VIEP EP from 1980 and the penny has finally dropped that five out of the six tracks from this EP are on this reissue and personally it's the early stuff that still sounds incredibly fresh and doesn't seem to date.

Speaking of the early material - Here's my link to a lossless rip of the Jah Wobble 2015 double CD Compilation 'The Early Years':

There are some great tracks on it - well worth a listen

PS - If anyone has a decent rip of the Snake Charmer mini-album, a link would be splendid. The two mixes by Francois Kervorkian are just killers.