Hello, the Eurovision songfestival was won tonight by a singer from sweden with a good voice and a run of the mill trance track, Euphoria. What was asthonising however was the amount of points it got, on average 9 points out of a max of 12 by 42 very different countries truly amazing ! The song i liked best was from the same composer but for Spain, best singer in the house but Spain will never win again, simply because it lacks neighbours. Maybe Tiesto could do a trance remix of it. The UK ended bottom bar one the singer from Norway who looked as if he escaped from the fifties.even more geriatric as UK's Humpty dink There were some truly awful presentations Albania's mentally deranged version of Bjork, the granny/monkey show from Russia both scored well yet the Irish Twin freakshow didn't, that's about all i have to say about it, expect more trance (emo-house) next year....

Time for some Sundaze, had plenty of sun lately, dazing on a sunny afternoon coming up from the guys who put their mind to it, and named themselves after that Italian scoundrel and fascist Marconi who's classy upbringing/connections enabled him to get the glory for what was in essence Tesla's work, latter had to sue and wait decades before he got the recognition. So a dubious name if you ask me, Marconi Union.

PS there's a new hoster here Ifile, pretty fast for me let me know if it works well for you

***** ***** ***** ***** *****
Marconi Union are a British musical trio Richard Talbot, Jamie Crossley and Duncan Meadows, with strong links to the Manchester based DOTCA arts collective. They formed in 2002 when Talbot and Crossley met while working in a record shop. Their self-produced debut album, Under Wires and Searchlights, appeared in 2003 on the small British independent label Ochre Records.The album was followed with a sustained period of silence only punctuated by a couple of remixes. They were then picked up in 2005 by All Saints Records (a label strongly associated with electronic musician Brian Eno) releasing their second album, Distance, which featured a darker, more electronic sound. The band played at the 2006 Big Chill Festival and Eden Sessions and granted their first interview in October 2006 for the widely syndicated American radio show Echoes, where they also played only their second live performance.

Their tracks have also appeared on several compilations albums, and they have done a number of remixes for other artists. Recording for their third album, A Lost Connection, began in 2007. Originally slated for release on All Saints, the band became victims of a label take over by Warner Bros and a number of contractual complications arose. Frustrated by the delays and now with apparently two full length albums recorded and awaiting release, Talbot and Crossley decided to take matters into their own hands and utilize web technology. In July 2008 they launched their digital label MU Transmissions which started to sell their music via their own website, with the first release being the long awaited A Lost Connection. In 2009 the Marconi Union website released a new album, Tokyo on the German Binemusic label. According to press releases and reviews Tokyo was inspired by media images of the city. In 2010 A Lost Connection was remastered and belatedly released on CD, and the band announced that Duncan Meadows had joined on a permanent basis having previously played with them at a number of live gigs.

In July 2011 a new album, Beautifully Falling Apart (Ambient Transmissions Vol:1) was released on Just Music. On October 16, 2011, Marconi Union created an eight minute track, 'Weightless' in collaboration with the British Academy of Sound Therapy. According to scientists at the Mindlab institution (a commercial 'neuromarketing' company) it induced a 65 per cent reduction in overall anxiety and brought test subjects' resting pulse rates to 35 per cent of their usual resting rates. The song features guitar, piano and manipulated field recordings. It is punctuated throughout by low tones that supposedly induce a trance-like state. This piece propelled the band into the media spotlight and news reports, and was reported in newspapers worldwide.

The sounds that Marconi Union create are less like music and more like stunning textures and atmospheres which paralyse all functions of the listener and coerce them into a trance like state. Under Wires and Searchlights is the more minimalist, with a starker use of electronica that generates a melancholic presence which permeates throughout the 8 tracks. The use of feedback at the start of the album staples a raw edge around the jazz fused ambience and implies a bleakness deep atmospheric feel with long suspenseful passages leavened with minimal jazzy drumming and hypnotic guitars, pianos and strings.

On the evidence of this it's no surprise that they ended up recording for Brian Eno's All Saints label and perhaps if this album had been on that label too, it would have had been as successful as Distance. Under Wires is an essential for anyone with any interest in port-Eno ambient or electronic influenced music. 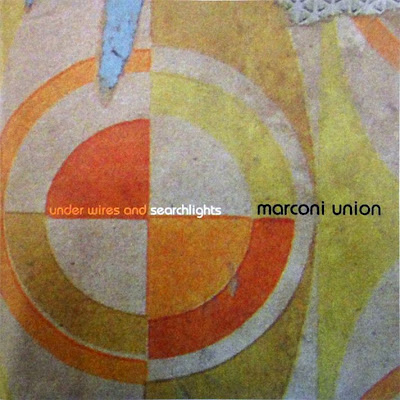 They share a label with Brian Eno, the same Brian Eno who asked the duo to oversee the remastering of his back catalog. This would automatically give Marconi Union a measure of credibility regardless of the quality of their individual work, but fortunately for them, their own music only makes their reputation more deserved. Distance, their first release from All Saints, explores Eno's idea of the soundscape. The album, rather than being a collection of separate songs, is a unified composition, an illustrative 40 minutes that turn listeners into -- as the group puts it -- silent observers of fleeting urban images, travelers in a locked, moving car, who come into and out of a city on a straight black road. Perhaps because of this desire to describe a situation, the songs are never quite completely realized; there are no choruses or verses. Instead they grow slowly, allowing listeners to accustom themselves to each development (a soft chord progression, a tinkling guitar) before a new one is added. Theme and tone and atmosphere and a sense of the whole are all there, but nothing ever comes to a full conclusion, nothing is ever definitively stated, because, as Marconi Union remind us, our journey is very literally transitory: we're traveling in a car, and see nothing for long, just glimpses of the world around us. This effect is accomplished mainly through the use of prolonged synthesizer chords and short piano or guitar arpeggios that repeat and fade throughout the album. Occasionally the drums slide in and out, the bass enters, there's even a sax solo; but that foundation -- and what is coincidentally moving us through the album -- never alters much. It's also this foundation that makes Distance so strong, and so successful. It's constant enough to ground the listeners in their journey, to give them a kind of explanation, but there is still enough mobility in the music to push reflection further. The songs are long but they aren't overly oppressive or weighty; rather, they're just sections of the drive, different images to ponder and move on from. 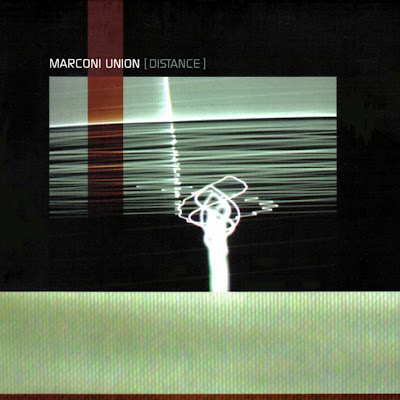 After a trudging label-related debacle, Manchester’s Marconi Union finally get to release their third album, A Lost Connection in physical form, having originally been released digitally by the duo through their own Marconi Union Transmissions. The band have already released their fourth album, Tokyo, last year, but in a bid to do justice to what has since become a fan favourite, the band have honoured ALC with a ‘proper’ release.

Their music has often been described as being atmospheric, or cinematic, on account of its slowly unfurling layers of delicate strings, glitches and soft, ambient electronics. It’s no surprise then that consequently their work has been used to soundtrack film and art projects alongside many a US TV show. Marconi Union often get compared to Boards Of Canada for pretty much these same reasons though A Lost Connection in particular puts emphasis on more up-tempo pulses, led by deep, smooth bass hits. If anything, it’s soothing; best suited to night time headphone sessions or long-winded, mesmerizing journeys – which is essentially what this album plays out like. 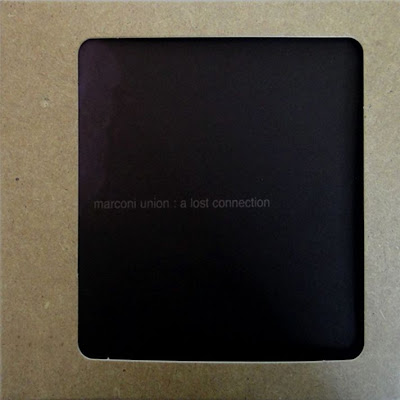 This new provider don't work !
Sorry because I would like to discover this album...

Well Anon, it really does work, I suspect the page layout confused you perhaps, but looking at the numbers there have been plenty of successful downloads and at great speed, at least I get 3mb/s regularly.

Dear Rho,
I just discovered your excellent blog. Thank you for your unique contributions to culture and experience. I did not know of Marconi Union before now. I've just listened to the first two, and I'm liking it quite a bit. Also, I had not encountered this particular download service before, and can say without reservation it is great! It is, as you say, fast (and it seems, reliable).
Again, thanks, Scot

Reups of Under Wires and A Lost Connection would be much appreciated.

i went to look for my cd copy of 'under the wires...' and couldn't find it!
i haven't heard their newer albums, so this will be good.

Hello Peter come again are you unable to get a file that has just been re-uploaded its live and has seen dozens of downloads this past week, so please

I always love these atmospheric pieces you write about in your blog, hence my request: Can you please upload these cinematic albums for the joy of your followers?
Thank you very much.

Thank you so much for the reup. Very appreciated.

two of three already gone, again. many thx for reup.