Hello, today at Sundaze we vere off the beaten track somewhat...maybe it's the snow..or is it the desert, the place that held so much sway over the life of todays' artist.. It's the light that always fascinates in the desert, not as much the midday burning sun perhaps, but the dawn and dusk can be magical and very "Sundaze". I'm talking of the man that died last friday, Don van Vliet, better known as Captain Beefheart, "a shaman" of dutch ancestry, a painter, sculpter but best known as a musician who "Once you've heard Beefheart, it's hard to wash him out of your clothes. It stains, like coffee or blood."(Tom Waits). Many and diverse artists have listed him as influential on them, in fact were they all to come to the funeral..well i could just aswell say, had they all bought a painting by him, he would have left his widow millions, but then that doesn't fit a desert dwellers life style now does it?

Captain Beefheart, Don Van Vliet, who has died at the age of 69, was one of the most influential American musicians of the 1960s and early 1970s. His status was always cult rather than commercial, and for most of his career he was broke. Yet he remained a hero to most of the musical avant garde – the Grateful Dead, Jefferson Airplane and the Mothers of Invention in America; Roxy Music, Hawkwind, Jethro Tull and Edgar Broughton in England. He was John Peel's favourite artist, and the DJ did much to promote Beefheart by playing his records when no other radio programme would touch them.

In 1964 Beefheart formed the Magic Band, the first of many line-ups under the name.They sounded pretty discordant, but due to Beefheart's extraordinarily mesmeric presence as frontman, a four and a half octave vocal range, his eccentric ability with lyrics, and his inexplicable one-liners to interviewers, the band was unforgettable. Beefheart once described his thing to an uncomprehending radio interviewer as "music to dematerialise the catatonia". His style wasrhythm and blues based but completely unorthodox in its approach to structure, rhythm and key. Magic Band musicians had names like Winged Eel Fingerling, Zoot Horn Rollo, the Mascara Snake, and Rockette Morton. They wore a ragbag of cloaks and thrift-shop outfits, and the Captain wore a hat, usually a topper, which became his trademark.

Van Vliet was born in Glendale, California on 15 January 1941, an only child who showed artistic talent from an early age: he claimed he was producing respected sculpture when he was five. When he was 13, his family (his father drove a bread truck) moved to the Mojave desert, an atmosphere that was to have an enormous influence on him, and particularly his painting, and a place where he lived on and off all his life. In 1959 he was offered a place at Antelope Valley junior college as an art major, but instead he hung out at home (doted on by his mother and grandmother) with his schoolfriend Frank Zappa, listening to old r'n'b records and planning various projects, most of which came to nothing. One was dreamed up sitting stoned in a car ("not Zappa," recalled Beefheart, "Frank never turned on") in the desert in 1962 , to shoot a film called Captain Beefheart meets the Grunt People. The film was never made, but the name stuck.

From their early teens Beefheart and Zappa developed a love-hate relationship which became life long, mainly based on resentment of Zappa's commercial success. Despite briefly moving to Cucamonga in California in the early 1960s to be with Zappa intending to form a band called the Soots, Beefheart remained in the desert while Frank, an astute businessman, moved to Los Angeles and founded The Mothers of Invention. Beefheart's early albums remain the most original: Safe as Milk (produced by Bob Krasnow and Richard Perry, 1967); Strictly Personal (completed in a week, produced by Bob Krasnow, 1968) and two albums for Zappa's Straight label: Trout Mask Replica (1969), and Lick My Decals Off Baby (1970).

For Trout Mask Replica Beefheart locked the Magic Band in a house in Woodland Hills for eight months, continually rehearsing and reworking the songs. Virtually broke, they often had nothing but bread to eat but when they finally got into the studio they recorded the entire double album in four and a half hours. Although they admired him, other musicians found Beefheart exasperating to work with. Guitarist Ry Cooder played on the first album and was due to do the Monterey festival with the band, but left in a temper after Beefheart had a LSD induced panic attack during rehearsal and walked off the back of the stage, landing on top of his manager.

It was Beefheart's stubborn refusal to conform that invariably lost him the big bucks. And he was not indifferent to money. He loved fast cars and owned variously a Hudson, Corvette and Jaguar, drank brandy alexanders, and was also something of a shoe fetishist (possibly due to a spell working as a shoe salesman), always wearing the best ones he could afford. In 1974 Beefheart was signed to Virgin Records. Richard Branson also desperately wanted to sign Zappa, but it was during one of Beefheart's hate-Frank periods. Despite being warned never to mention the name, virtually the first words Branson uttered to Beefheart were about how great it would be when he'd also got Zappa on to the label. It was a fateful and uneasy start. Yet when, as invariably happened with Beefheart, the relationship between artist and record company soured, it was Zappa who rescued Beefheart and took him on tour. Beefheart responded by filling a series of huge sketch books with angry drawings of Zappa.

Despite having no formal training in art, Beefheart drew and painted throughout his recording career. His first exhibition was in Liverpool at the Bluecoat Gallery in April 1972, while he was touringin England. He executed 15 black and white paintings in situ. In 1982, on the advice of New York art dealer Michael Werner that he would never be taken seriously as a painter unless he gave up music, Beefheart turned seriously to art. In the past few years he has gained a reasonable reputation as an artist, mainly doing large abstracts in oils.

He married his wife Jan in 1970. She gave him a secure base and cared for him through what was debilitating multiple sclerosis until the end.

Trout Mask Replica was ranked #58 on Rolling Stone's 2003 list The 500 Greatest Albums of All Time. On first listen, Trout Mask Replica sounds like raw Delta blues", with Beefheart "singing and ranting and reciting poetry over fractured guitar licks. But the seeming sonic chaos is an illusion -- to construct the songs, the Magic Band rehearsed twelve hours a day for months on end in a house with the windows blacked out. (Producer Frank Zappa was then able to record most of the album in less than five hours.) BBC disc jockey John Peel said of the album: "If there has been anything in the history of popular music which could be described as a work of art in a way that people who are involved in other areas of art would understand, then Trout Mask Replica is probably that work". 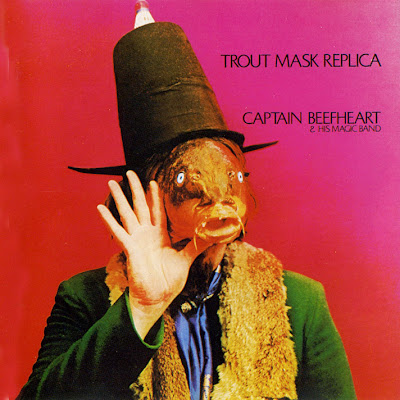 Generally acclaimed as the strongest album of his comeback, and by some as his best since Trout Mask Replica, Doc at the Radar Station had a tough, lean sound owing partly to the virtuosic new version of the Magic Band (featuring future Pixies sideman Eric Drew Feldman, New York downtown-scene guitarist Gary Lucas, and a returning John "Drumbo" French, among others) and partly to the clear, stripped-down production, which augmented the Captain's basic dual-guitar interplay and jumpy rhythms with extra percussion instruments and touches of Shiny Beast's synths and trombones. Many of the songs on Doc either reworked or fully developed unused material composed around the time of the creatively fertile Trout Mask sessions, which adds to the spirited performances. 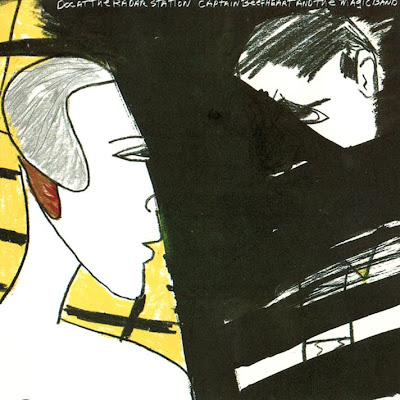 This compilation covers the six albums Captain Beefheart released thru Virgin, Unconditionally Guaranteed and Bluejeans & Moonbeams were later disowned by Beefheart, calling them "horrible and vulgar", asking that they not be considered part of his musical output. Yet The Virgin Compiler places 4 tracks on the album (!) And just 7 min of what is seen as his best album under the Virgin flag, Doc At Radar Station. In all this compilatiion shows a likely intended more relaxter side of Beefheart. 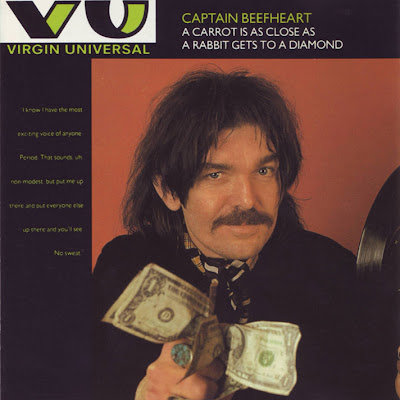 An other askinf of re-up...
Thanks for every thing!