Today's artist is a Venezuelan band that plays a blend of disco, acid jazz and funk mixed with Latin rhythms. In addition to releasing eleven critically acclaimed albums, the band is lauded internationally for their explosive, live shows, spanning nearly 60 countries. .... N'Joy

In 1995, EMI released their debut album, A Typical and Autoctonal Venezuelan Dance Band, which was a huge success in their home country, enabling them to sell out clubs around Caracas for the next couple of years. In 1996, David Byrne's Luaka Bop record label signed the group after discovering a CD they had planted in a New York City record store. Shortly thereafter, they went into the studio to work on their sophomore record, The New Sound of the Venezuelan Gozadera, which was released in 1998 and received accolades from press and musicians alike. Two years later and under the direction of famed producer Philip Steir, they released Arepa 3000: A Venezuelan Journey into Space, which received a Grammy nomination in the category of "Best Latin Alternative Album" and a Latin Grammy in the category of "Best Rock Album." Following the success of this release, the band relocated to New York City and began work on their masterpiece, The Venezuelan Zinga Son, Vol. 1, produced by "Little" Louie Vega of Masters at Work. Initially, the album was released in the UK and Japan through Long Lost Brothers Records, though a year later, Luaka Bop released the album in the US, resulting in another Latin Grammy nomination in the category of "Best Alternative Latin Album."

After ending their recording contract with Luaka Bop, Los Amigos Invisibles started their own label, Gozadera Records. The first release, Chill Out Venezuela, was a multiple-genre collection of Venezuelan artists, produced by Los Amigos Invisibles. For Gozadera's next release and the band's fifth studio album, they enlisted Dimitri from Paris to produce a collection of Venezuelan cover songs entitled, Super Pop Venezuela, which was initially offered in their native country only. In 2006, the album was released in the US, landing the band yet another Grammy nomination in the category of "Best Urban Latin Alternative Album."

After three years of anticipation, Los Amigos Invisibles released their album, Commercial, in a joint effort between Gozadera Records and Nacional Records. In an interview with America's National Public Radio, the band explained that the change in style was not by accident, nor was the decision to name the latest project Commercial. Rather, it is a tongue-in-cheek reference to band's former musical self. The release was a hit in Venezuela, debuting at #1 on the music charts. During the week of July 7, 2009, their song, "Vivire Para Ti" featuring Natalia Lafourcade, was offered as Single of the Week in the iTunes music store and in November 2009, Commercial won the Latin Grammy in the category of Best Alternative Music Album.

Following their Grammy win, 2010 saw festival appearances and shows throughout the United States, Latin America, Europe, Australia and New Zealand. In 2011, the band released Not So Commercial, an EP of outtakes from the Commercial album. This album was a nominee for the Grammy Award for Best Latin Pop, Rock or Urban Album in 2012. In April 2013, Repeat After Me was released. This album received a Grammy nomination in the category of "Best Latin Alternative Album" and a Latin Grammy in the category of "Best Alternative Album", "Song of the year" and "Best Cover". In 2014, keyboardist Armando Figueredo and guitarist José Luis Pardo (Cheo) left the band. Both were original members. A year later, they released Acústico, a compilation of their greatest hits played in an acoustic style. 2017 saw the release of the album El Paradise. This was followed by a concert tour in the United States.

Following a trio of increasingly embraced albums released by David Byrne's Luaka Bop label, Los Amigos Invisibles ventured off on their own for Superpop Venezuela, which they released independently on Gozadera Records. The album isn't a major departure from their past few -- musically, at least. As always, Los Amigos Invisibles careen wildly and freely through a fairly seamless set of sprawling disco-funk jams accented by Latin dance and house. They do so with a wink and a nod, exhibiting a gleeful sense of camp that has earned them a cult following. This is why the one notable departure here is unsurprising: rather than pen an album of their own songs, they've decided to interpret a set of covers, specifically a bunch of Venezuelan pop songs from the past few decades. Hence the album title. Chances are, most of these songs, if not all of them, will be unfamiliar -- assuming you're not well versed in Venezuelan pop, that is. Nonetheless, it's easy to tell that Los Amigos Invisibles had a field day interpreting these personal favorites. The campiness is apparent from the start, as the album opens with a beauty pageant anthem, "Miss Venezuela," and several performances are downright goofy. It's easy to feel party to the playfulness that just oozes from Superpop Venezuela, thanks in part to Dimitri from Paris, who produces the bulk of the album and who likewise traffics in campy music. His production, much like that of fellow disco-house mavens Masters at Work, who produced Los Amigos Invisibles' previous album, The Venezuelan Zinga Son, Vol. 1, accentuates the nonstop dance party character so integral to this group's appeal. Indeed, Superpop Venezuela plays like one long, meandering disco-funk jam en español. This no doubt may present problems for listeners with short attention spans who need individual, unique, actual songs through which to index. Rather, Superpop Venezuela is intended for uninterrupted listening, an album you play while you're partying or getting prepared to go party. It can feel relatively slight because of that, granted, as there are few instantly memorable songs, but that doesn't lessen the appeal of Superpop Venezuela, which is arguably more fun than past Amigos Invisibles albums, if less impressive for its lack of actual songwriting. 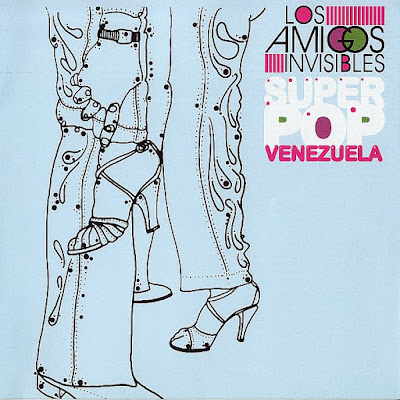 This is the first album Los Amigos Invisibles have released without naming their country of origin -- Venezuela -- in the title. Whether this, along with the title they did choose, implies they're aiming at a more universal audience than just those inclined to check out a South American disco-funk band, remains to be seen. The simple fact is, just about anyone who hears this album will like something about it. Their songs are melodic, funky as hell, and are pretty much guaranteed to get dancefloors pumping. Their retro '70s and very early-'80s grooves may seem campy at first glance, but this is no winking exercise like Deee-Lite or the Scissor Sisters. Los Amigos Invisibles are serious about getting the party going and keeping it going. "Vivire Para Ti" should immediately be incorporated into the repertoire of any self-respecting cruise-ship dance band, and they even sing in English on "In Luv with U." This album falls somewhere between the minimalist funk of Prince's hardest tracks and the lush disco appropriations of Daft Punk's Discovery; "In Luv with U" could easily have come off that album, while "Mentiras" features razor-sharp guitars and synth lines that are straight from the Paisley Park playbook. This is a killer summer album; throw it on and watch your neighbors get drunk and dance embarrassingly. 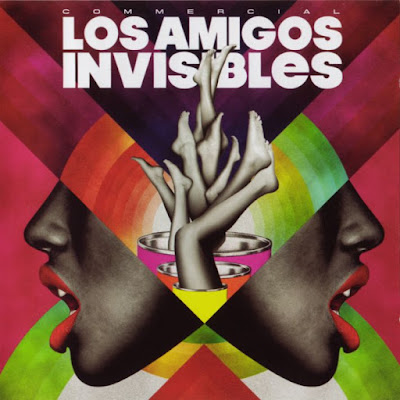 Repeat After Me is Los Amigos Invisibles' seventh recording overall, and their third for Nacional. While the band's "new gozadera" sound remains, the level of sophistication at work here was only hinted at on their previous two offerings for the label. The Venezuelan sextet combines grooves that push the envelope of songwriting, arranging, and production at every turn. While Commercial and Not So Commercial utilized inspirations from Daft Punk to Prince's Paisley Park, the inspirations on Repeat After Me reach back further -- toward the soulful funk of the mid- to late '70s, smooth disco, and Latin soul, with just enough lithe rock to expand the dynamics. "La Que Me Gusta"'s intro bassline is swiped straight from the Supremes' "You Can't Hurry Love," but the melody is less urgent, modern, warmer, a new breed of Latin soul. By contrast," "Sex Appeal" is pure wonky funk. "Río Porque No Fue un Sueño" melds Isley Brothers groove, Leroy Hutson's seductiveness, and Santana's guitar soloing circa Caravanserai and Welcome. With "Stay," a desperate, broken love song and the set's longest cut, the funk remains, but it's spacy, nocturnal, and emotive. The participation of the swinging trio Los Hermanoes Naturales on "Mostro" adds wild, scattershot gypsy jazz to the proceedings to boot. Throughout, the horn and string arrangements on some of the aforementioned cuts, or the fingerpopping -- not to mention hilarious -- "Reino Animal," expand the colorful palette of sounds and layered textures found on the set. Disco gets a real hearing on the largely instrumental "Robot Love" and the dancefloor banger "Invisible Love," near the album's end where the strings are straight out Barry White and the synths are pure Giorgio Moroder, all woven through this killer neo-Latin soul frame. Despite the obvious influential references, Los Amigos Invisibles are able to stretch and morph them into something completely their own. This is due in no small part to Julio Briceño's vocals. No matter the music's intensity, he manages to add this loose, laid-back feel to every utterance -- whether he is singing in Spanish or English -- that makes the party roll at a simmering heat. José Luis Pardo's production and mix are equal partners with the band in this creation. Together they make Repeat After Me another step up the creativity ladder for Los Amigos Invisibles. 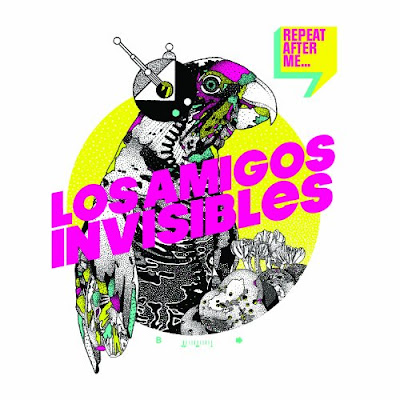 The Invisible Friends premiered their first acoustic album with the collaboration of Mónica Delgado,  Natalia Lafourcade, Alex Syntek, Jay de la Cueva (Moderatto), Venezuelan Mariana Vega, Gil Cerezo (Kinky), a Brazilian percussion group and a string quartet led by Venezuelan musician and arranger Álvaro Paiva were part of the guests of the new record production Acústico Live.  "They are hits from Los Amigos reversionadas and where we appeal to our Latin and Caribbean roots," José Rafael Torres El Catire, bassist of the group, said in an interview.  In this regard, he explained that in Acústico Live you will hear songs like Sexy in bolero format, Viviré para ti in bossanova, La que me gusta en raggae or Mentiras turned to bugalú.  "Our songs are a fusion of Anglo-Saxon rhythms with a lot of Latin rhythms, but for the album we take away the Saxon and we stay with the rest", decision taken to emphasize the importance of music made in Latin America, but never in order to give up the characteristic style of the band.  El Catire shared that this new album was made with "tirada" of having fun by adapting new rhythms to the melodies that were released from the 80s to the present day.  They emphasized that for this new mix of rhythms they invited music personalities that, according to the bassist, "are great friends of the band" and some of them had already participated with the group in previous productions, something that for El Catire helped when deciding  who would collaborate with the Venezuelans.  "Only the agenda of those we already knew was taken into account, as was the case with Jay de la Cueva, a musician we met on a radio show and where we declared ourselves mutual followers."  The group formed by Julio Briceño Chulius (voice and minor percussion instruments), Mauricio Arcas Maurimix (percussion, vocals and choirs), José Luis Pardón (guitar), Armando Figueredo Armandito (keyboard), Juan Manuel RouraMamel (drums and choirs) and José Rafael Torres El Catire (bass); is since 1991 a reference in Spanish-speaking rock, year when the band was consolidated and put on the popularity charts songs like Ponerte en cuatro or The Anal Disc, where the merger became patent and served as a hallmark of the group. 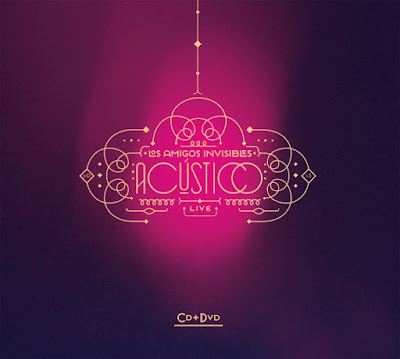