Totó La Momposina exemplifies the living tradition of Colombian folk music, having carefully studied and performed her native song and dance for several decades. Colombia's indigenous music is a heavily rhythmic hybrid of Spanish, native South American, and Afro-Cuban influences, and La Momposina mastered its different styles and rhythmic variations so well that she was invited to perform at the 1982 Nobel Prize ceremony for Colombian novelist Gabriel Garcia Marquez. La Momposina was born in the village of Talaigua, on the island of Mompos, located in the Magdalena River near Colombia's northern coast. Not only was her family musical (her parents were fourth-generation musicians, her father a drummer, her mother a singer and dancer), but her village was blessed with the presence of Ramona Ruiz, a skilled, veteran cantadora (female peasant singer) who helped train La Momposina in her teenage years. La Momposina traveled up and down the Colombian coast, learning as much music and dance as she could -- from village celebrations to the common, everyday songs sung as accompaniment to daily labor. During this extended research period, La Momposina was honing her vocal and performance skills as well, discovering a rich power in her voice that soon made her extremely popular locally. In 1968 (sometime in her twenties), La Momposina formed her own band, continuing to perform at smaller local functions but also expanding her horizons in the hopes of building a professional career. Word of her vocal prowess spread quickly, and by the '70s, she had begun making international appearances, touring Europe and most of the Western Hemisphere. In 1982, she performed at a ceremony honoring Garcia Marquez with the Nobel Prize in Literature, and subsequently spent four years in Paris studying the history of dance at the Sorbonne. During this time, La Momposina recorded her first album, 1985's Totó La Momposina y Sus Tambores (released on Auvidis). She returned to Colombia in 1987, reconnecting with her roots by touring in the more immediate region and also traveling to Cuba for further musical study. In 1991, La Momposina was invited to join Peter Gabriel's WOMAD concert festival; she toured the world once again, and subsequently recorded a second album for Gabriel's Real World label. La Candela Viva was released in 1993 to much acclaim, and made La Momposina in great demand at music festivals around the world. Carmelina appeared in Europe in 1996, and La Momposina moved to England, traveling between the U.K., Europe, and South America. She continued to perform across the globe, incorporating her children, and grandchildren, into her large performing troupe and elaborate stage show. Her fourth album, Pacanto, was released in 2001. It garnered her a Latin Grammy nomination for Best Traditional Tropical Album.

She spent the next eight years touring the globe before returning to live in and work Colombia. In 2006, she received a lifetime achievement award from Womex. She also resumed recording in 2009 and issued La Bodega on Astar Artes. In 2013, she was awarded a Latin Grammy for lifetime achievement as well, and released an album for Sony Columbia in 2014's El Asunto.

Back in 2009, Swiss producer and DJ Michel Cleis had issued a house track called "La Mezcla," which contained two samples off La Momposina's classic La Candela Viva; the tune became a European dance club smash and the response prompted Cleis' label, Cadenza, to request access to the multi-track tapes for the purpose of creating remixes. Producer John Hollis -- who had been at the original 1991 and 1992 sessions -- with Real World's project manager Amanda Jones and other production associates, listened to the complete session masters anew. There were 20 tracks and 40 takes in all. They subsequently remastered both released and unreleased cuts from the sessions and assembled Tambolero -- a revisioned version of La Candela Viva -- in celebration of La Mamposina's 60th anniversary as a recording and touring artist. It was released globally in the summer of 2015.

Tóto La Momposina is more than a name. It's a place, a people, and way a life, exemplified in the music created by one woman and her group -- many of whom are members of her family. They come from Talaigua, a village on the island of Mompos in the northern Colombian river of Magdalena, and the music they make comes from their ancestors. Much of it, like the cumbias "Dos de Febrero" and "El Pescador," is driven by voices and percussion, with Tóto in particular displaying a powerful vocal strength. However, the musical crossover becomes more interesting with the sextet piece "La Sombra Negra," which was brought over to Colombia by black Cubans, and shows its origins in the guitar and tiple playing and rhythms, as well as the style of harmonies in the voices. You can think of this music as folkloric, preserving a tradition that's in danger of extinction, and in many ways you'd be right -- the gaita playing of "Dáme la Mano Juancho," for example, is redolent of that. But when the rhythm of "Mapale" explodes from the speakers, it's impossible to think of this as anything but living, breathing, and right now. That's reinforced by the title track, where the drums sizzle under the voices, with Tóto once again in the center, with the kind of lungs that come across all too rarely, and a tone to die for. Tóto La Momposina is a singular talent. Though the centerpiece of this record, she's happy to sit back and let the spotlight shine on others, as on "La Acabación," a surprisingly sprightly funeral tune from San Basilio de Palenque. But her presence is always commanding, and the music she makes is wonderful indeed. 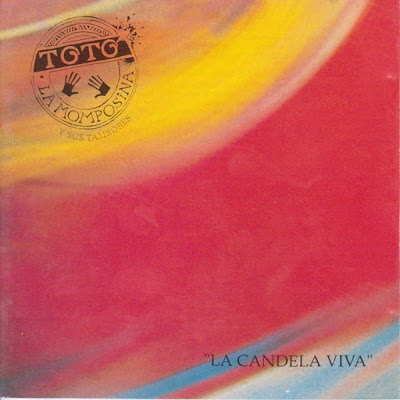 Since the 1970s, Colombian singer and dancer Toto La Momposina has been dancing and singing the music of Colombia’s Caribbean coastline on stages and in music halls across the globe. She comes from the village of Talaigua on an island in the great Magdalena River. Her 1993 album, La Candela Viva, issued on Real World, was produced by Phil Ramone and John Hollis, and is an enduring classic of Colombian, South American, and Afro-Latin traditional sources. It has been sampled by everyone from Timbaland to Michel Cleis. In 2009, after a request from the latter, Hollis (by then Momposina's son-in-law) sought the masters at Real World Studios and discovered a wealth of forgotten material, some 20 songs and 40 takes. In December of 2014, he remixed, re-imagined, and re-created the album with support and assistance from Real World's Amanda Jones. He and Momposina added new unreleased songs, scraped down some mixes to the core, and used alternate takes. He added backing vocals and handclaps from Momposina's granddaughters Maria del Mar -- who was a toddler at the original sessions -- and Orianna Melissa. In Bogota the following February, Momposina's son Marco Vinicio and Nestor Vanegas added bass and guitar tracks to emphasize the groove quotient, and came up with what amounts to an entirely different album; it's sparser and rawer, more immediate. The percussion on Jose Barros' cumbia "El Pescador" is more up front, as is the backing chorus; this take is slightly slower, adding to the celebratory feel in a narrative that celebrates returning fishermen. On "Chi Chi Mana," a guitar has been added to the tipple, creating an interplay that underscores its Afro-Latin heritage. "Gallacinto" is a traditional chant from Talaigua that didn't make La Candela Viva. In call-and-response, Mamposina directs the changing rhythms (it's a dance). She is accompanied by handclaps, percussion, and the vociferous chorus. "Curara" finds the gaita flutes mixed to the very front of the song. They flesh out the dimension of the tale's lovers and dialogue with the chorus, while Momposina is the poet who narrates their unresolved desire. The closing title track is a funeral dirge that contains several rhythms -- from cumbia to negro, mapale to Afro. The bomba and tambor drums hypnotically engage with the chorale as Momposina simultaneously moans in grief and offers tribute to the song's absent subject. It gathers in dynamic force until it explodes in celebration. The handsome package contains three sets of liner notes (one an essay from Momposina), many wonderful photos, an English translation of the lyrics, and track by track annotations. It doesn't matter if one has heard La Candela Viva, Tambolero is an inspired, masterful re-interpretation from an artist who has learned much more about these songs and their origins since the '90s. It is an exercise in pure joy. 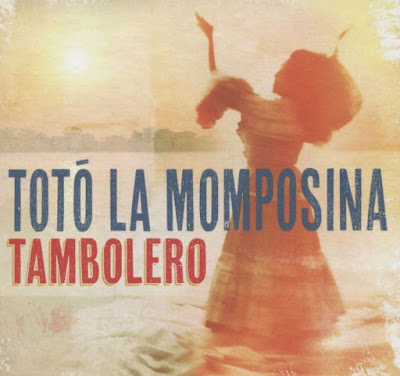 ChocQuibTown (sometimes written as Choc Quib Town) is a Colombian hip-hop group. Although the band formed in Cali, the members are originally from the Colombian department of Chocó. The group consists of Carlos "Tostao" Valencia (rapping), his wife Gloria "Goyo" Martínez (singing and rapping), and Gloria's brother Miguel "Slow" Martínez (production and rapping). The band's music draws influence from a wide variety of modern genres including hip-hop and more recently electronica, combined with traditional Colombian genres including salsa, Latin jazz, and Afro-Latin rhythms, utilizing instruments such as congas, timbales, bongos, and trumpets.

After growing up in Chocó and forming in Cali, the ChocQuibTown relocated to Bogotá and gained popularity performing in the city's bars. The group's first two albums, Somos Pacífico (2006) and Oro (2010) were bolstered by the singles "Somos Pacífico" and "De Donde Vengo Yo", with the latter song winning a Latin Grammy in 2011. The band's third album, Eso Es Lo Que Hay (2011) experienced further success, featuring the single "Hasta el Techo", followed by El Mismo (2015). In November 2017, the band signed with Sony Music Latin during a ceremony in Miami, and plans to release a new album entitled Sin Miedo in 2018

The band released El Mismo in 2015, led by the reggae-tinged love song "Cuando Te Veo". The single reached number 13 on the Billboard US Tropical Songs chart, number 16 on the Billboard Latin Rhythm Airplay chart, and number 29 on the Billboard US Latin Pop chart. Leila Cobo of Billboard noted a more commercial sound on El Mismo, viewing the album as an effort to transform the group from "critical curio to commercial star" that "appends pop song structure and stickier hooks to the band's eclecticism." The group shot the music video for "Nuquí (Te Quiero Para Mí)" on the beaches of Nuquí in Chocó as a way to pay tribute to their home department and to encourage tourism to the area. 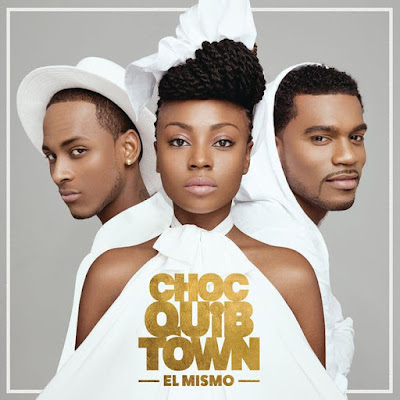