Hello, the curse holds Vettel can't win his home grand prix, he was leading and in total command but then all of a sudden he was off the track and into the barrier, a little weather god had struck. Meanwhile the car sea had opened for Hamilton and he took the 25 points. Bottas, Raikonen and Verstappen followed the Red Bull lacked speed and he couldn't really bother Raikonen.

The Teachings of Don Juan: A Yaqui Way of Knowledge was published by the University of California Press in 1968 as a work of anthropology, though many critics contend that it is a work of fiction. It was written by Carlos Castaneda and submitted as his Master’s thesis in the school of Anthropology. It purports to document the events that took place during an apprenticeship with a self-proclaimed Yaqui Indian Sorcerer, don Juan Matus from Sonora, Mexico between 1960 and 1965.

The book is divided into two sections. The first section, The Teachings, is a first person narrative that documents Castaneda's initial interactions with don Juan. He speaks of his encounters with Mescalito (a teaching spirit inhabiting all peyote plants), divination with lizards and flying using the "yerba del diablo" (lit. "Devil's Weed"; Jimson weed), and turning into a blackbird using "humito" (lit. "Little smoke"; a smoked powder containing Psilocybe mexicana). The second, A Structural Analysis, is an attempt, Castaneda says, at "disclos[ing] the internal cohesion and the cogency of don Juan’s Teachings."......'N Joy 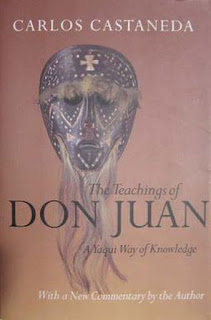 "Anything is one of a million paths. Therefore you must always keep in mind that a path is only a path; if you feel you should not follow it, you must not stay with it under any conditions. To have such clarity you must lead a disciplined life. Only then will you know that any path is only a path and there is no affront, to oneself or to others, in dropping it if that is what your heart tells you to do. But your decision to keep on the path or to leave it must be free of fear or ambition. I warn you. Look at every path closely and deliberately. Try it as many times as you think necessary.

This question is one that only a very old man asks. Does this path have a heart? All paths are the same: they lead nowhere. They are paths going through the bush, or into the bush. In my own life I could say I have traversed long long paths, but I am not anywhere. Does this path have a heart? If it does, the path is good; if it doesn't, it is of no use. Both paths lead nowhere; but one has a heart, the other doesn't. One makes for a joyful journey; as long as you follow it, you are one with it. The other will make you curse your life. One makes you strong; the other weakens you.


Before you embark on any path ask the question: Does this path have a heart? If the answer is no, you will know it, and then you must choose another path. The trouble is nobody asks the question; and when a man finally realizes that he has taken a path without a heart, the path is ready to kill him. At that point very few men can stop to deliberate, and leave the path. A path without a heart is never enjoyable. You have to work hard even to take it. On the other hand, a path with heart is easy; it does not make you work at liking it."