Hello, the Tour saw it's first mountains today, as expected a large group broke free and distanced themselves 7 minutes with to his own surprise yellow jersey leader Van Avermaet between them and ended up 4th extending his lead almost 2 minutes, winner was Alaphilippe who took the mountain jersey too. The Sky peloton came in 3,5 min later with most of the favorites. Tomorrow a short but sharp stage with 2 HC (highest category) mountains will stir up the general classification (GC), and show us who will challenge Froome in the 2018 Tour.


Today's artist is a Japanese synthpop band that collaborated from 1979 until the 1990s. The Sunsetz, led by Makoto Kubota, and Sandii started as separate artists, and each have a separate discography. However, their collaboration provided a particular body of work that is representative of the period, and which successfully blended Eastern, Western and pop influences.... ..............N'Joy

Though they garnered the most attention in the early 1980s under the name Sandii and The Sunsetz, this Japanese Pop band had already been recording together with similar lineups and under similar monikers for nearly a decade prior. Backed by band leader and guitarist Makoto Kubota, guitarist Kenichi Inoue, bassist King Champ Onzo and percussionist Hideo Inoura, and fronted by lead singer Sandii, born Sandy O'Neale, the band found moderate success throughout the 1980s .

The group's roots trace back to Jan Jan, a Shibuya club where Kubota, Onzo, Inoue and Inoura recorded their first album, 1973's "Sunset Gang," released under the name Makoto Kubota and The Sunset Gang 2. The following year, Sandii cut her first record in Hawaii, an EP on Pineapple Records titled "Sandy I," and she decided to return to her native Japan to pursue a career in the music industry 2. After returning to Japan, Sandii became friends with singer Kyu Sakamoto (known for his early 60s hit "Sukiyaki"), who helped her land a DJ job with public television broadcaster Nippon Hoso Kyokai (NHK) . 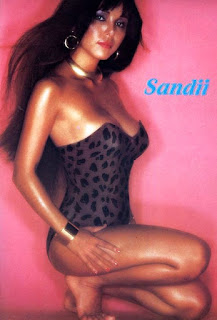 In 1975, under the name Sandy Ai, Sandii released a pair of 7" singles for Toho records. That same year, she met Makoto Kubota and The Sunset Gang when they appeared on her NHK television show to promote their album, "Hawaii Champroo" 2. Sandii hit it off with the group, who were already established enough to be supporting Eric Clapton on Japanese tour dates, and joined Kubota and The Sunset Gang as a back up singer 4. She continued to work on her own material, including the single "Goodbye Morning," which won the Grand Prix at the 7th World Popular Song Festival (Japanese equivalent to the Eurovision Song Contest) in 1976 .

The group released their third album, "Dixie Fever," produced by Haruomi Hosono, in 1977 and they shortened their name to The Sunset Gang. 1978 saw the relase of "Mystery Nile," a collection of pop/disco covers, released under the name Sandy O'Neil. Though no credits are given in the liner notes, "Mystery Nile's" musicians include Sandii, Kubota and other members of The Sunset Gang .

After making a guest appearance on Yellow Magic Orchestra's 1979 LP "Solid State Survivor,"  Sandi began working with YMO's Haruomi Hosono, Yukihiro Takahashi and Ryuichi Sakamoto on her "debut" LP, 1980's "Eating Pleasure" . Hosono apparently convinced Sandii, who was still going by Sandy, to add the two i's to her name to reflect her Hawaiian influences . The Sunset Gang hopped on board the recording sessions of "Eating Pleasure," and thus Sandii and The Sunsetz was born. Lyricist Chris Mosdell, who previously wrote English language material for YMO, also worked on the album .

The group's first gig as Sandii and The Sunsetz was, rather amazingly, opening for YMO at the Budokan in . They followed "Eating Pleasure," with another Hosono produced album, "Heat Scale," in 1981. During this time the band gained the attention of Japan, and Sandii and The Sunsetz were brought on as the opening act for Japan's Sons of Pioneers tour. Sandii and The Sunsetz got on well with Japan, and David Sylvian wrote material for and performed on their 1982 album, "Immigrants." "Immigrants" managed a fair deal of attention on its release, getting praise from Melody Maker, Steve Scales (of Talking Heads), Dave Jordan (of Fun Boy Three) and even David Bowie 1. The band followed up "Immigrants" with the 1982 single "Sticky Music," which reached number three on Austrailian charts .

David Sylvian's connection to The Sunsetz lasted through the mid 80s, and he wrote and sang on the track "This is Not Enogh," off of their 1986 album "La La La La Love" (released as "Banzai Baby" in the West). One of the stronger songs on the album, the track is an interesting counterpoint to the much more minimal material Sylvian was working on around that time.

Sandii and The Sunsetz delved into reggae territory for their final full albums, "Rhythm Chemistry" and "One Love," the former of which featured Sly Dunbar and Robbie Shakespeare. The Sunsetz split in 1990, leaving Sandii to further pursue her solo career and Makoto Kubota to focus attention on prodction work. Sandii began extensive study of Hula dance in the 90s and has since reached the rank of Kumu Hula (Hula Master) and owns a hula dance school .

Sandii’s first album, Eating Pleasure (1980), was sung entirely in English, and received much critical attention.
It's another Hosono production featuring YMO on most (if not all) tracks. Alive and Love Sick sound more like The Sunsetz on their own. Drip Dry Eyes was later re-recorded by Takahashi and in 1993 was re-issued in an "unplugged" man ner as a duet with Sandii. The cut here is a long version with an extra verse. Another duet version appeared on Takahashi's Time & Place live album. An edit appears on Sandii's Viva Liva Lava compilation LP. Zoot Kook is the real cracker here - a real indic ation of the YMO sound on BGM. Shantith and Oinori are experimental numbers using ethnic music, pointing towards the sound of the Sunsetz on Heat Scale and Immigrants. This originally had a sleeve showing Sandii wearing a basqu e made from vegetables, but was replaced with a photo of her in a leopardskin swimsuit. According to the lady herself, Hosono gave Sandii the extra "i" in her name to suggest her Hawaiian connections." 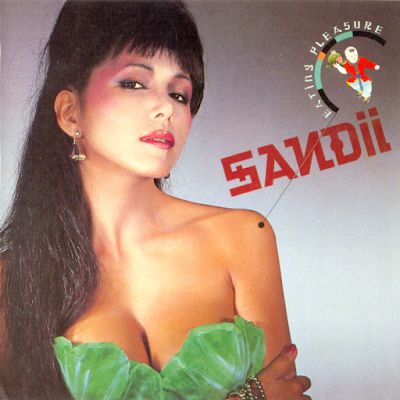 Heat Scale (1981), was recorded in Ibiza, Spain, and released in a total of 17 countries. "Released under the name Sunsetz.There are some differences in packaging too - the Japanese album has a gatefold insert and a colour glossy print, the UK pressing has nothing and the Euro pressing has a different font on the outer sleeve and an inner sleeve with lyrics. Hosono plays on and produces this album. This was issued under the name Sandii & The Sunsetz in the West and the name stuck. 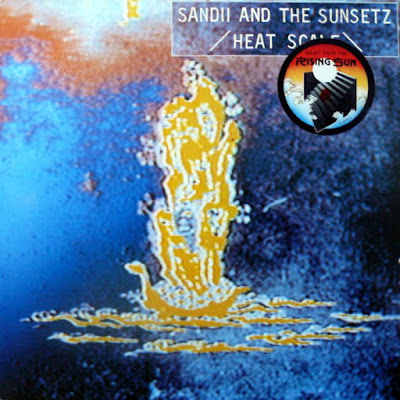 Executive produced by Haruomi Hosono and Yukihiro Takahashi. David Sylvian writes lyrics for 3 tracks and sings on. YT sings and plays on a track HH and Matsutake appear also. By this time the group had garnered quite a following from overseas, such as Melody Maker's (UK music paper) Adam Sweeting and David Bowie and as such featured other admirers such as David Sylvian of Japan, Talking Head Steve Scales and Dave Jordan of Fun Boy Three as well as Haruomi Hosono and Yukihiro Takahashi of YMO. Both Sandii and Makoto Kubota share lead vocal duties in Japanese and English. Their music by this time was a mixture of rock and techno-pop with some Okinawan traditional elements. 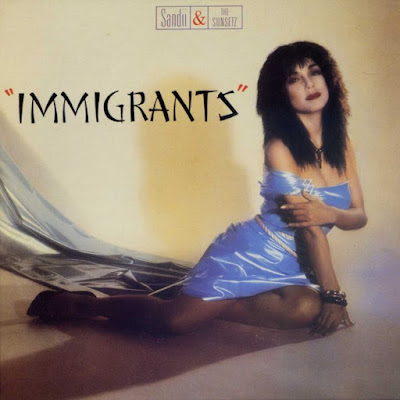 Hiromi Moritani, Japanese avant-garde vocalist who started out as a member of the legendary punk band Aunt Sally. In 1980 she collaborated with Ryuichi Sakamoto on the single Shukyoku. In '81 she and the members of Can made the album Phew. After taking some time off, Phew made a recording with former members of DAF and Neubauten. She subsequently released two albums with Anton Fier, Bill Laswell and others. She is currently active in a wide range of projects, including Novo Tono, Phew Unit, a duo with Seiichi Yamamoto, and Big Picture.

This is a superb, virtually unknown album by the Japanese vocalist Phew, formerly of the punk/no wave band Aunt Sally. Backed by members of Can -- Holger Czukay and Jaki Liebezeit -- and recorded at Conny Plank's studios in Germany, it has the earmarks of an album Can could have made, had they taken a different path after Ege Bamyasi. Phew's vocals are not by any formal standards very expressive, but they fit the icy urgency her compatriots create, and pitch the song-oriented cycle towards a more approachable form even for the casual listener. The mostly minimalistic landscape of the record is repetitive, rhythmic, and spacious. "Doze" adds an eerie child-like keyboard melody to a wonderful effect, and "P-Adic" is a disjointed, unlikely pop song, with an insistent beat and an off-kilter synth solo. "Signal" come closest to popular music, with Phew's insistent vocals chanting in Japanese over the expansive backbone Czukay and Liebezeit effortlessly create. With small variations in the beat, enhanced by subtle keyboard flourishes and echoey production, the sound manages to capture both the wide surrounding expanse as well as the tight clarity necessary to distinguish even the smallest nuance in the music. The crispness of the production creates a hypnotic loop that insists you pay attention. The mood varies from song to song, most of which are around the three-minute mark, and when the 35-minute record is over you're eager to repeat the experience. Phew's future albums would add more elements to her sound with some success, but the precise organic cohesiveness of her self-titled debut is difficult top. 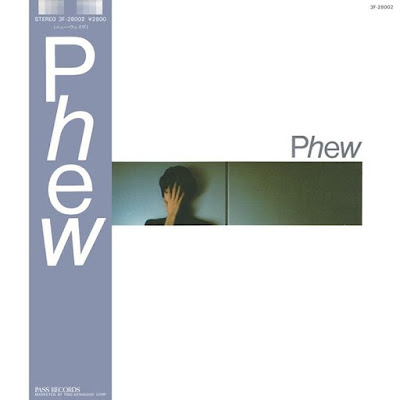 Though no Can folks are present here, this album is every bit as appealingly kooky and curious as her others. This album navigates a strange and uneasy balance between pop sheen and wayward weirdity with a knowing touch that'll keep you gripped even during the passages where you're scratching your head. 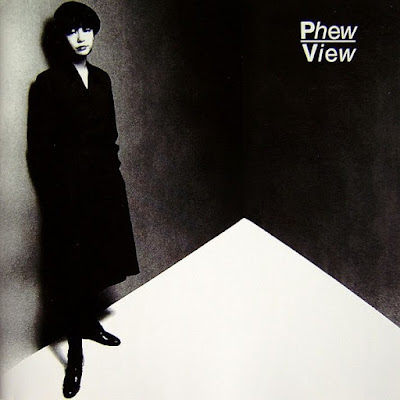