Well after ten weeks of P Funk audio we've come to the end of the series and what better way to finalise with a choice of two video's, both are essential for the P Funker Enjoy !!!

Don Letts's hilarious and colourful profile of the godfather of funk, whose 50-year career has defined the genre. From his 1950s days running a doo-wop group out of the back of his barber store, through the madness of the monster Parliament/Funkadelic machine of the 70s to his late 90s hip-hop collaborations with Dre and Snoop, George Clinton has inspired generations of imitators. Contributors include Outkast's Andre 3000 and Macy Gray.

This is a great documentairy on George Clinton and the P Funk well worth an hour of your time, view directly at Youtube or download it here. 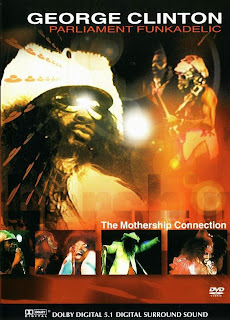 01 Introduction
02 Cosmic Slop
03 Do That Stuff
04 Gammin' On Ya
05 Standing On The Verge Of Getting' It On
06 The Undisco Kid
07 Children Of Production
08 Mothership Connection
09 Swing Down Sweet Chariot
10 Dr. Funkenstein
11 Comin' Round The Mountain
12 P. Funk
13 Tear The Roof Off The Sucker
14 Night Of The Thumpasorous Peoples
15 Funkin' For Fun

Bear witness to the Mothership descending into Houston's Summit Arena.