Obviously the P funk continued into the eighties and nineties, one of the most visible artists was Bootsy Collins who span off at the height of the Parliament/Funkadelic era..

Bootsy (born William Collins, October 26, 1951, Cincinnati) is a funk/R&B bassist/singer/bandleader. He formed his first group, the Pacesetters, in 1968, featuring Phelps "Catfish" Collins (his brother; guitar), Frankie "Kash" Waddy (drums), and Philippe Wynne. In March 1970, after most of the members of James Brown's band quit over a pay dispute, The Pacemakers were hired as Brown's backing band and they became known as The J.B.'s. (They are often referred to as the "original" J.B.'s to distinguish them from later line-ups that went by the same name.) Although they worked for Brown for only 11 months, the original J.B.'s played on some of Brown's most intense funk recordings, including "Get Up (I Feel Like Being a) Sex Machine", "Super Bad", "Soul Power", and "Talkin' Loud and Sayin' Nothing".

After parting ways with James Brown, Bootsy returned to Cincinnati and formed House Guests with his brother Phelps Collins, Rufus Allen, Clayton "Chicken" Gunnels, Frank Waddy, Ronnie Greenaway and Robert McCullough. The House Guests released two singles on the House Guests label as well as a third as The Sound of Vision on the House Guests label. Collins next moved to Detroit, following the advice of singer and future Parliament member Mallia Franklin. Franklin introduced both Collins brothers to George Clinton, and 1972 saw both of the Collins brothers, along with Waddy, join Funkadelic. Bootsy played bass on most of Funkadelic and Parliament's albums through 1980, garnering several songwriting credits as well.

Collins launched Bootsy's Rubber Band as a spinoff of P-Funk in 1976, the band including his brother Phelps, Waddy, Joel "Razor Sharp" Johnson (keyboards), Gary "Mudbone" Cooper (drums), and Robert "P-Nut" Johnson (vocals), along with "the Horny Horns." (He was sometimes billed alone as Bootsy, and sometimes as William "Bootsy" Collins.) Signing to Warner Bros., he enjoyed the first of his 15 R&B singles chart entries in 1976 with "Stretchin' Out (In a Rubber Band)." His most successful singles were "The Pinocchio Theory" (1977) and the chart-topping "Bootzilla" (1978). He also released six albums on Warners through 1982, including the gold-sellers Ahh...The Name Is Bootsy, Baby! (1977) and Bootsy? Player of the Year (1978), then took a six-year recording hiatus, and returned on Columbia in 1988 with the appropriately named What's Bootsy Doin'? In 1989, Bootsy was a member of the Bootzilla Orchestra on Malcolm McLaren's album Waltz Dancing. In 1990, Bootsy was a featured guitarist and bassist with the dance music trio Deee-Lite. In 1992, Bootsy joined with guitarist Stevie Salas and drummer Buddy Miles to form the funk-metal fusion group Hardware. The trio released one album, Third Eye Open, before disbanding. Bootsy's New Rubber Band released Blasters of the Universe on August 2, 1994.

In 1995, Bootsy played in the remake of Jimi Hendrix's "If 6 Was 9," for Axiom Funk, a Funkadelic-like one-off supergroup produced by Bill Laswell and featuring (Funkadelic members) George Clinton, Bernie Worrell, Bootsy Collins, (the guitar of the late) Eddie Hazel, Gary Shider and Bill Laswell. The group released only one album

Fresh Outta 'P' University followed four years later. Numerous Collins live shows and reissues appeared as the 21st century opened, and in 2006, the bassist actually released a Christmas album, Christmas Is 4 Ever, on Shout Records. In 2011, the conceptual album, The Funk Capital of the World, landed with everyone from Ice Cube to Samuel L. Jackson on the guest list.

Bootsy Collins' debut solo album, Stretchin' Out in Bootsy's Rubber Band, was an extremely tough act to follow, but thankfully, there are no signs of a sophomore slump (either creatively or commercially) on his second album, Ahh...The Name Is Bootsy, Baby! Most P-funk addicts consider this 1977 LP essential listening, and it isn't hard to see why they feel that way. Everything on the album is excellent; that is true of up-tempo smokers like "The Pinocchio Theory" and the title song as well as slow, moody, eerie offerings such as "What's a Telephone Bill?" and "Munchies for Your Love." The lyrics are consistently humorous and clever, the grooves are consistently infectious. You can think of Ahh...The Name Is Bootsy, Baby! as a meeting of the funk minds -- Collins produced this record with his mentor, George Clinton, who co-wrote all of the material. So Clinton has a lot of input and gives Ahh...The Name Is Bootsy, Baby! the distinctive P-funk sound that Parliament/Funkadelic was known for. But at the same time, he encourages Collins' originality -- Bootsy's Rubber Band sounds like a Parliament/Funkadelic spin-off (which is exactly what it was), but not a Parliament/Funkadelic clone. Without question, Ahh...The Name Is Bootsy, Baby! is essential listening for lovers of hard 1970s funk. 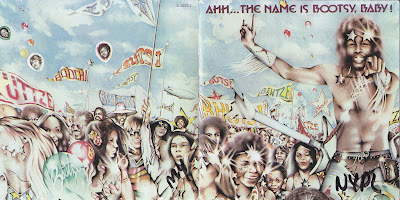 Released in 1978 at the height of Parliament-Funkadelic mania, Bootsy? Player of the Year finds Bootsy far from short of quality material despite his affiliation with the numerous P-Funk-affiliated projects being churned out at this time. In fact, this album finds Bootsy at his peak; his previous two albums may have their share of brilliant moments and were no doubt filled with great ideas, melodies, and funk, but here he seems to have perfected his songwriting. There really isn't a dull song on Bootsy? Player of the Year. The up-tempo songs -- "Bootsy?," "Bootzilla," "Roto-Rooter" -- rate as some of the most exciting P-Funk material ever released, each song clocking in over five minutes and chock-full of elastic basslines. On the other hand, the abundance of slow jams -- "May the Force Be With You," "Very Yes," and "As In (I Love You)" -- helps maintain a good balance, providing a breather from the sweatier moments. Then there is "Hollywood Squares," a song that teeters somewhere between a dance song and a ballad, sometimes picking up the pace, other times slowing it down to a strut. Bootsy? Player of the Year rates among the most enjoyable P-Funk albums ever. Unfortunately, it also marks the end of a glorious run. By the following year, 1979, it was clear that the P-Funk army was running out of fresh ideas, and Bootsy was no exception, as he'd struggle creatively for a couple years to come. This makes Bootsy? Player of the Year seem all the more special in retrospect, because it was among the last of the great P-Funk releases. 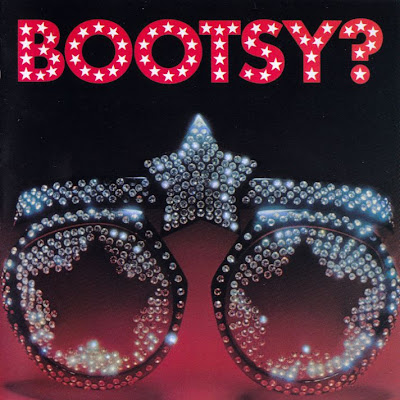 While certainly not among his greatest efforts, Bootsy Collins' Ultra Wave (1980) is still infinitely better than most of the disco dregs. Although Collins (bass/vocals) had not formally split up the Rubber Band -- as the lineup was a continual fluctuation of talent from the seemingly bottomless reservoir of P-Funk alumni -- he takes sole (and quite possibly soul) credit on his fifth long-player in under four years. The title is an homage to the Detroit-based studios where Bootsy collaborated with core Rubber Band contributors Phelps "Catfish" Collins (guitar), Robert "P-Nut" Johnson (vocals), and the superbad dynamic horny horns of Fred Wesley (trombone) and Maceo Parker (sax). Not missing from these -- or any other Bootsy affairs for that matter -- is the unapologetic party atmosphere Collins' infuses within every pulsation of his full-bodied and self-proclaimed "Space Bass". The catchy and sexually tweaked opener "Mug Push" quickly became a dancefloor favorite and garnered a short but significant run on the R&B charts. Collins, influenced by Sly & the Family Stone and especially funk-bass originator Larry Graham, gives it a respectable degree of listenability.The slinky and rubbery backbeat on "Fat Cat" hearkens to the loose booty of former Bootsy's Rubber Band tracks with Johnson's falsetto likened to the shrill warbling often utilized on Prince's seminal sides. The pseudo-novelty closer "Sound Crack" would probably have more going for it had Collins ditched the dated opening dialogue. Once it gets up to full steam, it roars with an intensity fuelled by the same bounce behind such P-Funk staples as "Up for the Downstroke." . 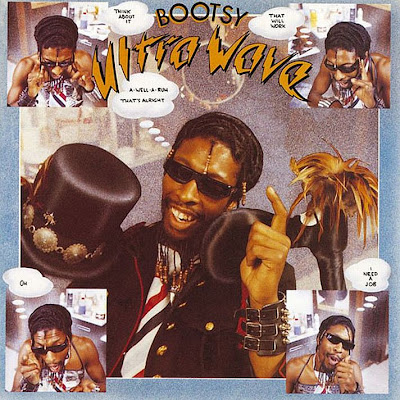 a fine blog you have here, sir.

I would really appreciate it, if you could re-up Bootsy's Rubber Band - Bootsy Player of the Year.

Can you please re-up these Bootsy cuts?