Hello, as usual i present a round-up of the series and this time I add a PDF that came with some KLF downloads earlier but you all should get the chance to pick up and share this wonderful PDF book....

Wilson claimed in Cosmic Trigger: Volume 1 "not to believe anything", since "belief is the death of intelligence". He described this approach as "Maybe Logic.". Wilson saw his work as an "attempt to break down conditioned associations, to look at the world in a new way, with many models recognized as models or maps, and no one model elevated to the truth". His goal being "to try to get people into a state of generalized agnosticism, not agnosticism about God alone but agnosticism about everything".

RAW Explains Everything ! The 12 previously posted episodes in 2 batches

Enter, Discordianism, a modern chaos-based religion originally described by Malaclypse the Younger in Principia Discordia, but popularised by Robert Shea and Robert Anton Wilson in the Illuminatus! books, written between 1969 and 1971. It's a huge cult sex-drugs-occult-paranoid conspiracy theory-science fiction book, where reality shifts and nothing is as it seems. Or is that what I want you to believe? It was first published in the early seventies, written by Robert Anton Wilson and Bob Shea, originally as three separate novels: 'The Eye In The Pyramid', 'The Golden Apple', and 'Leviathan', but now available as a collected edition The Illuminatus! Trilogy,

'Illuminatus!' tells the tale of the international conspiracy the Illuminati, who attempt to order and control mankind, and receive individual power (become illuminated) by causing mass deaths. Their arch enemies The Justified Ancients of Mummu (The JAMs), are "an organisation (or disorganisation) who are at least as old as the Illuminati and represent the primeval power of Chaos". Along with affiliated groups the LDD and the ELF (Erisian Liberation Front), the JAMs are engaged in a secret war to prevent the Illuminati from 'immanentizing the eschaton' (bringing closer the end of the world). 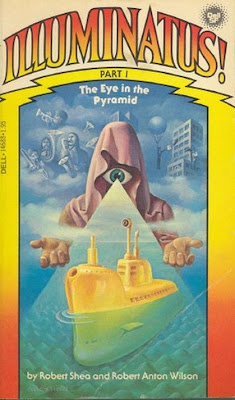 The Illuminatus! Trilogy as PDF (2mb)

(previously added to some 1007 KLF posts)