Today's artist was sometimes known as La Negra (literally: The Black One), was an Argentine singer who was popular throughout Latin America and many countries outside the region. She was born on Argentina's Independence Day. With her roots in Argentine folk music, Sosa became one of the preeminent exponents of nueva canción. She gave voice to songs written by many Latin American songwriters. Her music made people hail her as the "voice of the voiceless ones", and "the voice of America"....N'Joy

Mercedes Sosa, the celebrated Argentinian folk singer and political activist, died aged 74. Sosa possessed a deep, alto voice and a strong sense of conviction, and had a warm, engaging personality. These qualities helped to make her one of the few Latin American musicians who could, over five decades, command a wide international audience. Described as "the voice of Latin America", she was revered as a commentator on the political and social turmoil that afflicted the region.

Born 9 July 1935 in San Miguel de Tucumán, the capital of one of Argentina's smallest provinces, to a working-class family of mixed French and Amerindian (Quechuan) ancestry, she began singing and folk dancing as a child. Aged 15, Sosa won a singing concert sponsored by a local radio station. The prize was a two-month contract to perform for the station, and this allowed her to turn professional.

Initially singing a wide variety of popular songs, Sosa gained a local reputation as a rising talent. After she married the musician Manuel Oscar Matus, the couple began looking to new developments in Latin American music. In the early 1960s, this led them to embrace the nueva canción (new song) movement, which unconsciously mirrored the US folk movement as Chile's Victor Jara and Cuba's Silvio Rodríguez reshaped Latin America's troubadour tradition to reflect the struggles under way across the South American continent.

Sosa and Matus chose nueva canción songs that suited her voice, such as Violeta Parra's Gracias a la Vida (Thanks to Life) and Horacio Guarany's Si Se Calla el Cantor (If the Singer Is Silenced), and her success helped to popularise the movement. Sosa's ability to convey a wide emotional range meant that listeners connected strongly with both songs and singer, and by the mid-1960s she was very popular in Argentina. Nicknamed "La Negra" because of her long, jet-black hair and Amerindian heritage, Sosa issued a series of albums, including Romance de la Muerte de Juan Lavalle (Ballad of the Death of Juan Lavalle) and Mujeres Argentinas (Argentinian Women), that established her as a distinctive artist. By the late 60s, she was drawing material from across the region (including Amerindian communities) and this made her a pan-Latin American star. When Sosa and Matus's marriage ended, Matus forged a respected solo career in Argentina.

In the early 70s Sosa acted in the film El Santo de la Espada (The Saint of the Sword), a biopic of the Argentinian independence hero José de San Martín. Sosa's popularity found her touring internationally, her leftist political sympathies – a 1972 album Hasta la Victoria (Until Victory) celebrated workers' struggles – making her especially welcome in the Soviet bloc. As a champion of the rights of the poor, Sosa became known as "the voice of the voiceless ones". These political leanings caused Sosa trouble when the Argentinian military, under Jorge Videla, staged a coup in March 1976. Initially, only some of Sosa's songs were censored, but as she became seen internationally as a voice of freedom, the harassment increased.

In early 1979, Sosa was performing in the Argentinian university city of La Plata when the military stopped the concert. Humiliating Sosa by searching her on stage, they then arrested her and 350 members of the audience. Sosa was detained for 18 hours until international pressure forced her release (she had to pay a large fine) but this event – alongside increasing numbers of death threats – forced her to flee to Europe, where she lived in Madrid and Paris.

Sosa found exile difficult and returned to Argentina in early 1982. The military junta remained in power, but Sosa's fame excluded her from punishment, and a series of concerts she gave at the Teatro Colón in Buenos Aires, with guest appearances from celebrated Argentinian singers, found her truly welcomed home. A live recording of these concerts was issued after the junta fell. Sosa continued to tour (performing in the UK several times) and to record, her fame growing on an international scale – she shared stages or studios with artists including Luciano Pavarotti, Sting and Shakira. In a career spanning almost six decades, she released 70 albums. She won three Latin Grammy awards and received a huge number of honorary titles including the UN Voluntary Fund for Women (Unifem) prize from the United Nations, in recognition of her defence of women's rights. She remained politically active and vocally opposed Carlos Menem when he was Argentinian president.

"I didn't choose to sing for people," Sosa said in a recent interview on Argentinian television. "Life chose me to sing." Overweight for many years, Sosa had begun suffering serious health problems. She was admitted to hospital two weeks ago suffering from liver problems. Progressive kidney failure and cardiac arrest followed.

She is survived by her son, Fabián, he said: "She lived her 74 years to the fullest. She had done practically everything she wanted, she didn't have any type of barrier or any type of fear that limited her".

In 1972, Sosa released the socially and politically charged album “Hasta la Victoria.” Mercedes Sosa and many other Latin American artists at that time were part of the Nueva Canción or Nueva Trova Movement. Greatly inspired by the Cuban Revolution, this movement was characterized by protest songs, with a strong anti-imperialist and revolutionary message. Nueva Canción emphasized a call to resist. It became the soundtrack of the revolutionary movements in Latin America. From Cuban artists like Silvio Rodriguez and Carlos Puebla, to Argentine artists like Atahualpa Yupanqui and Mercedes Sosa, the movement’s music spoke about revolutionary movements in Nicaragua, Chile, Bolivia, and many other countries in Latin America. It memorialized the struggles of great Latin American revolutionary leaders. As a champion of the rights of the poor, Sosa became known as "the voice of the voiceless ones". 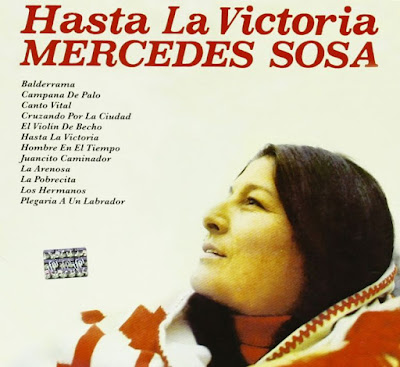 Mercedes Sosa interprets the works of Atahualpa Yupanqui - an indigenous poet of the southern Andes here. These songs are so profoundly intimate (if you understand Spanish), so heart wrenching, so intensely beautiful, that I can only listen to this album in absolute and total privacy because tears are likely to be rolling down my cheeks. No fancy synthesizers, no fancy arrangements. Just simple folkloric instrumentation and the most beautiful folk songs I have ever heard. This could well be Mercedes Sosa's crowning achievement. Nothing else she has done reaches to the sublime heights of beauty expressed on this album. If you understand Spanish, get this album and you will treasure it for the rest of your life. If you don't understand Spanish, consider learning it for the sake of the sublime poetry contained here. 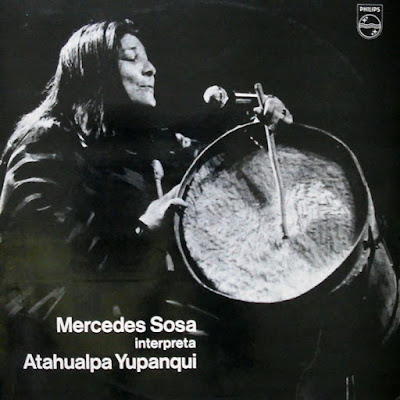 Mercedes Sosa's live album, which includes part of La Negra's performances at the Opera Theater in Buenos Aires between February 18 and 28, 1982. The album was attended by several other renowned artists such as Charly García , Leon Gieco, Ariel Ramírez, Antonio Tarragó Ros, Raul Barbosa, Rodolfo Mederos and others.
The full range of Mercedes Sosa is on this one. It's live and the emotions of the crowd make it even better. Sosa has been singing for years and every music afficionado should own at least one of her releases.  This album gets better after each song, with the departure of Mercedes Sosa, each song has a deeper meaning now. That's the way things go. As with many live albums it's like being there. This one is no exception. A wonderfull voice fom a wonderfull human being. 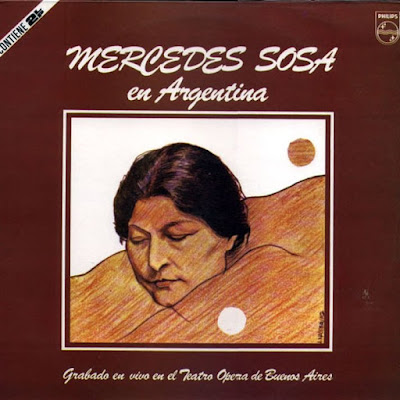 One of the best Mercedes Sosa compilations on the market, 30 Años (1993) is loaded with 20 of her greatest hits and goes back three decades to the early days of her recording career. Highlights include "Gracias a la Vida," "La Maza," and "Maria, Maria," to just mention a few of her signature songs. Given its early-'90s release date, 30 Años misses a bunch of her latter-day material but makes up for it with an emphasis on certifiable classics. 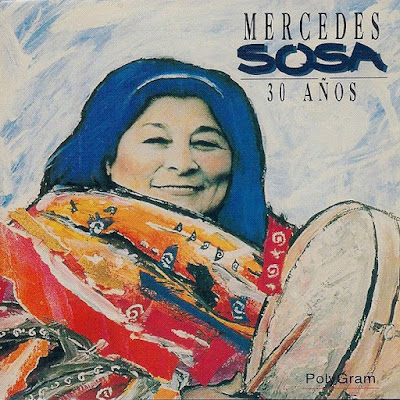