Today's artist  was the second Argentine musician to make a significant impact upon modern jazz -- the first being Lalo Schifrin, in whose band he played. His story is that of an elongated zigzag odyssey between his homeland and North America. He started out playing to traditional Latin rhythms in his early years, turning his back on his heritage to explore the jazz avant-garde in the '60s, reverting to South American influences in the early '70s, playing pop and fusion in the late '70s, only to go back and forth again in the '80s. North American audiences first heard Barbieri when he was a wild bull, sporting a coarse, wailing John Coltrane/Pharoah Sanders-influenced tone. Yet by the mid-'70s, his approach and tone began to mellow somewhat. Still, regardless of the idiom in which he worked, the warm-blooded artist was always one of the most overtly emotional tenor sax soloists on record, occasionally driving the voltage ever higher with impulsive vocal cheerleading. His nickname, Gato, is Spanish for "cat".. ...N'Joy

Gato Barbieri was the second Argentine musician to make a significant impact upon modern jazz -- the first being Lalo Schifrin, in whose band Barbieri played. His story is that of an elongated zigzag odyssey between his homeland and North America. He started out playing to traditional Latin rhythms in his early years, turning his back on his heritage to explore the jazz avant-garde in the '60s, reverting to South American influences in the early '70s, playing pop and fusion in the late '70s, only to go back and forth again in the '80s. North American audiences first heard Barbieri when he was a wild bull, sporting a coarse, wailing John Coltrane/Pharoah Sanders-influenced tone. Yet by the mid-'70s, his approach and tone began to mellow somewhat in accordance with ballads like "What a Diff'rence a Day Makes" (which he always knew as the vintage bolero "Cuando Vuelva a Tu Lado") and Carlos Santana's "Europa." Still, regardless of the idiom in which he worked, the warm-blooded Barbieri was always one of the most overtly emotional tenor sax soloists on record, occasionally driving the voltage ever higher with impulsive vocal cheerleading.

Though Barbieri's family included several musicians, he did not take up an instrument until the age of 12 when a hearing of Charlie Parker's "Now's the Time" encouraged him to study the clarinet. Upon moving to Buenos Aires in 1947, he continued private music lessons, picked up the alto sax, and by 1953 had become a prominent national musician through exposure in the Schifrin orchestra. Later in the '50s, Barbieri started leading his own groups, switching to tenor sax. After moving to Rome in 1962 with his Italian-born wife, he met Don Cherry in Paris the following year and, upon joining his group, became heavily absorbed in the jazz avant-garde. Barbieri also played with Mike Mantler's Jazz Composer's Orchestra in the late '60s; you can hear his fierce tone unleashed in the "Hotel Overture" of Carla Bley's epic work Escalator Over the Hill.

Yet after the turn of the next decade, Barbieri experienced a slow change of heart and began to reincorporate and introduce South American melodies, instruments, harmonies, textures, and rhythm patterns into his music. Albums such as the live El Pampero on Flying Dutchman and the four-part Chapter series on Impulse! -- the latter of which explored Brazilian and Afro-Cuban rhythms and textures, as well as Argentine -- brought Barbieri plenty of acclaim in the jazz world and gained him a following on American college campuses.

However, it was a commercial accident, his sensuous theme and score for the controversial film Last Tango in Paris in 1972, that made Barbieri an international star and a draw at festivals in Montreux, Newport, Bologna, and other locales. A contract with A&M in the U.S. led to a series of softer pop/jazz albums in the late '70s, including the brisk-selling Caliente! He returned to a more intense, rock-influenced, South American-grounded sound in 1981 with the live Gato...Para los Amigos under the aegis of producer Teo Macero, before doubling back to pop/jazz on Apasionado. Yet his profile in the U.S. was diminished later in the decade in the wake of the buttoned-down neo-bop movement.

He continued to record and perform well into the 1980s, including composing the scores to films such as Firepower (1979) and Strangers Kiss (1983). Beset by triple-bypass surgery and bereavement over the death of his wife, Michelle, who was his closest musical confidant, Barbieri was inactive through much of the 1990s. But he returned to action in 1997, playing with most of his impassioned intensity, if limited in ideas, at the Playboy Jazz Festival in Los Angeles and recording a somewhat bland album, Que Pasa, for Columbia. Che Corazon followed in 1999.

As the 21st century opened, Barbieri saw a steady stream of collections and reissues of his work appear. A new album, Shadow of the Cat, appeared from Peak Records in 2002.   Barbieri was the inspiration for the character Zoot in the fictional Muppet band Dr. Teeth and The Electric Mayhem. On April 2, 2016, Barbieri died of pneumonia in New York City at the age of 83.

This record chronicles a flavorful and unforgettable night during a live show recorded in Montreux, Switzerland. Gato Barbieri leads his fantastic group of musical friends with hurricane-like flair on his tenor sax. At times surreal and mind-boggling, Barbieri shows just how far one can let the music go to break the borders of jazz, sending his music into fresh and uncharted territory. Barbieri's chops and melodic sweeps are daring and bold, while the back crew brings vitality and utter life to the music, from the record's beginning to its very end. Within the first tune, "El Pampero," Barbieri plays a home tone riff over and over, changing only the keys of the song, with improvisation in between that gets the audience into dancing. Lonnie Liston Smith plays with great sweeping ease on the piano, while percussionists Pretty Purdie, Na-Na, and Sonny Morgan send their rhythms into soaring heights. A wondrous sense of dynamics is displayed here and throughout the record. The call and response between Na-Na and Morgan is a featured key ingredient, keeping the mood of the percussion section fluid and tight. Yes, the listeners were mesmerized, and one can feel lifted in spirit again with each playing of this recording. Perhaps the focus and direction of the music, which latched on greatly to the home key and initial melody, gives the music a more solid foundation. This was certainly a special night in Switzerland, in which Barbieri proudly shared his music, credited in a natural more than economic fashion, breathing spirit into the audience rather than taking money. For this performance was priceless, a can't-miss that left audience members bedazzled, talking among themselves years later, saying, "Do you remember when?...I was there!" With passion and faith in music, this group of musicians thrived here in this recorded moment, to demonstrate art, haunting art, vivid imagination, and victory in art. Although some of the smoky sax solos get a little uncomfortably close to 1970s fusion cliché, Gato Barbieri's score to Bertolucci's 1972 classic is an overall triumph. Suspenseful jazz, melancholy orchestration, and actual tangos fit the film's air of erotic longing, melancholy despair, and doomed fate. "Last Tango in Paris" is a particular standout, its orgiastic, wordless vocal yelps reflecting, whether by design or not, the actual content of the movie. The 1998 remastered reissue is by no means just a substitute for the old vinyl; it more than doubles the length of the original release with a "Last Tango in Paris Suite," put together by Barbieri himself from 29 cues from the original score as used in the film. 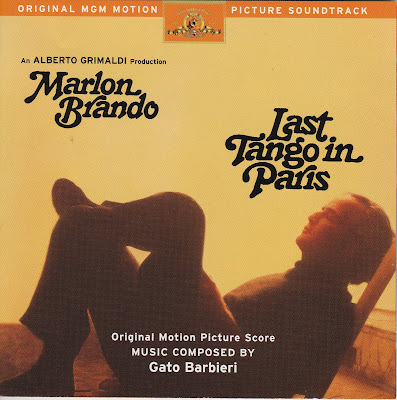 While it's true that Argentinian saxophonist Gato Barbieri is widely celebrated in jazz circles for his out recordings with Dollar Brand (now Abdullah Ibrahim) and his Impulse! Latin America series, it is Barbieri's Flying Dutchman sides, in particular the two albums featured on this excellent two-fer from BMG's Bluebird subsidiary, that tell the tale. Bolivia and Under Fire feature the talents of John Abercrombie, Airto, Stanley Clarke, Bernard Purdie, Roy Haynes, Mtume, Lonnie Liston Smith, and others in their articulation of soul-jazz, Latin and Afro-Cuban jazz, and Brazilian melodic sensibilities. Their dynamics are spacious and spacy; their lush presentations are not overly slick and are full of radical harmonic developments and an intricate interaction between front-line and percussion instruments as equals in the melodic idiom. This two-fer features beautifully remastered sound and complete liner notes with a solid essay by Donald Elfman as well as the original liners for the individual albums by Nat Hentoff and Robert Palmer. These are indispensable Latin jazz records that opened many doors. They remain vital and progressive recordings that will enlighten the cultural and musical perspectives of any open-minded listener. 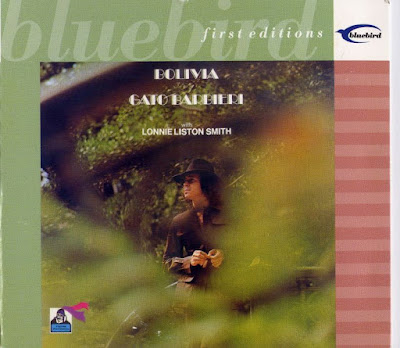 When Gato Barbieri signed to Impulse! Records in 1973 for a series of critically lauded albums, he had already enjoyed a celebrated career as a vanguard musician who had worked with Don Cherry and Abdullah Ibrahim (then known as Dollar Brand), recorded for three labels as a leader, and scored and performed the soundtrack to director Bernardo Bertolucci's film Last Tango in Paris. Chapter One: Latin America was a huge step forward musically for the Argentinean-born saxophonist, even as it looked to the music of his heritage. This turned out to be the first of four chapters in his series on Latin America, and for it he teamed not with established jazz musicians, but instead folk and traditional musicians from his native country, and recorded four of the album's five cuts in Buenos Aires -- the final track, a multi-tracked solo piece, was recorded in Rio de Janeiro. The music found here doesn't walk a line between the two worlds, but freely indulges them. The enormous host of musicians on the date played everything from wooden flutes to electric and acoustic guitars, bomba drums and quenas, and Indian harps and charangos, creating a passionate and deeply emotive sound that echoed across not only miles but also centuries. At the helm was Barbieri, playing in his rawest and most melodic style to date, offering these melodies, harmonies, and rhythms as a singular moment in the history of jazz. While the entire album flows seamlessly from beginning to end, the A-side, comprised of Barbieri's own "Encuentros" and J. Asunción Flores and M. Ortiz Guerrero's classic "India," is the clear standout. That said, the four-part suite that commences side two -- "La China Leoncia Arreo la Correntinada Trajo Entre la Muchachada la Flor de la Juventud" -- is a work of such staggering drama and raw beauty that it is perhaps the single highest achievement in Barbieri's recorded catalog as an artist. Simply put, this album, like its remaining chapters, makes up one of the great all but forgotten masterpieces in 1970s jazz. 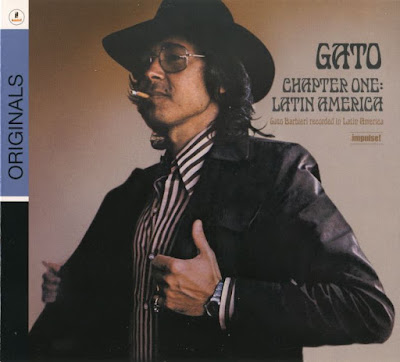