Today's artist was an American author and screenwriter. He worked in a variety of genres, including fantasy, science fiction, horror and mystery fiction. Widely known for his dystopian novel Fahrenheit 451 (1953), and his science fiction and horror story collections The Martian Chronicles (1950), The Illustrated Man (1951), and I Sing the Body Electric (1969), our man was one of the most celebrated 20th- and 21st-century American writers. While most of his best known work is in speculative fiction, he also wrote in other genres, such as the coming-of-age novel Dandelion Wine (1957) or the fictionalized memoir Green Shadows, White Whale (1992).

Recipient of numerous awards, including a 2007 Pulitzer Citation, Bradbury also wrote and consulted on screenplays and television scripts, many of his works were adapted to comic book, television and film formats. On his death in 2012, The New York Times called Bradbury "the writer most responsible for bringing modern science fiction into the literary mainstream.... N'joy. 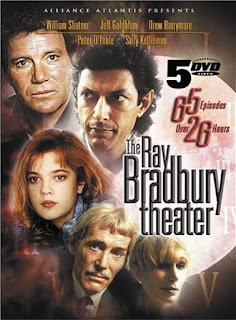 The Ray Bradbury Theater is an anthology series that ran for two seasons on HBO, three episodes per season from 1985 to 1986, and four additional seasons on USA Network from 1988 to 1992. It was later shown in reruns on the Sci Fi Channel. All 65 episodes were written by Ray Bradbury and many were based on short stories or novels he had written, including "A Sound of Thunder", "Marionettes, Inc.", "Banshee", "The Playground", "Mars is Heaven", "Usher II", "The Jar", "The Long Rain", "The Veldt", "The Small Assassin", "The Pedestrian", "The Fruit at the Bottom of the Bowl", "Here There Be Tygers", "The Toynbee Convector", and "Sun and Shadow".

Many of the episodes focused on only one of Bradbury's original works. However, Bradbury occasionally included elements from his other works. "Marionettes, Inc." featured Fantoccini, a character from "I Sing the Body Electric!". "Gotcha!" included an opening sequence taken from "The Laurel and Hardy Love Affair". Characters were renamed, and elements added to the original works to expand the story to 23–28 minutes or to better suit the television medium.

Each episode would begin with a shot of Bradbury in his office, gazing over mementos of his life, which he states (in narrative) are used to spark ideas for stories. During the first season, Bradbury sometimes appeared on-screen in brief vignettes introducing the story. During the second season, Bradbury provided the opening narration with no specific embellishment concerning the episode. During the third season, a foreshortened version of the narration was used and Bradbury would add specific comments relevant to the episode presented. During the fourth and later seasons, a slightly shorter generic narration was used with no additional comments.

A hypochondriac feels there is something wrong with his bones so he consults a creepy "bone specialist" who promises to help him; sometimes the cure really is worse than the disease.

Here a series of Ray Bradbury stories specially dramatised for radio with introductions by the author.

Ray enthusiastically agreed and, joined by writer Catherine Czerkawska and director Hamish Wilson (who had collaborated on some Bradbury stories broadcast by BBC Scotland), we embarked on a series of 30-minute plays under the generic title Ray Bradbury's Tales of the Bizarre.

Ray Bradbury introduces his own spooky tale of confessions and confectionary dramatised by Catherine Czerkawska. Starring TP McKenna as the priest and John Yule as the young man. Director: Hamish Wilson 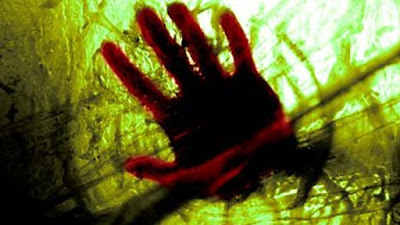