Hello, as poor Gerrard can be held responsible for loosing the match and likely the title today, it couldn't have happened to a nicer guy, mr Liverpool, oh the irony having to depend on the fellow Liverpudlians of Everton on blocking Manchester City winning the championship and let the Reds have it...it won't happen. Meanwhile Chelsea proved once again they can block any team from playing football and they clearly went for a 0-0 with an eye on the odd chance that might come their way, and it did. A slight concentration lapse by Gerrard got severely punished, there's only justice on the other side Stephan. Although today those Vatican clowns declared themselves holy, saintly popes apparently these hadn't abused children, just professionally looked the other way. 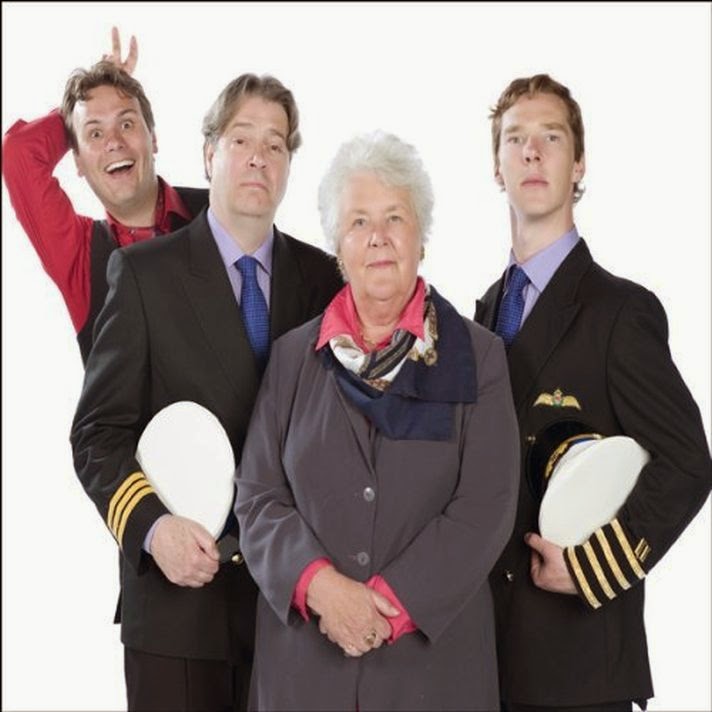 Cabin Pressure is a radio situation comedy series written by John Finnemore. Its first series was broadcast on BBC Radio 4 in 2008. The show follows the exploits of the oddball crew of the single aeroplane owned by "MJN Air" as they are chartered to take all manner of items, people or animals across the world. The show stars Stephanie Cole, Roger Allam, Benedict Cumberbatch and John Finnemore.

The principal cast, the 4-person crew, is the following:

As part of her last divorce settlement, Carolyn Knapp-Shappey (Stephanie Cole) received a mid-size (16 seat) jet aeroplane named "GERTI" (a "Lockheed McDonnell 312", registration G-ERTI). As a result, she founds her very own single plane charter airline, "MJN Air" ("My Jet Now"), which is crewed by an oddball mixture of characters who fly to various cities around the world, encountering a variety of situations.

The airline's only Captain, Martin Crieff (Benedict Cumberbatch), has wanted to be a pilot since he was six years old (before which he wanted to be an aeroplane). He suffers, however, from a distinct lack of natural ability in that department. He was rejected by at least one flight school, and had to put himself through the required coursework, barely qualifying for his certification – on his seventh attempt. He took the job with MJN for no salary at all, as long as he could be Captain. He appears to have no outside interests beyond flying. He is a stickler for procedures and regulations, but is more prissy than pompous. At the end of series two he tells Douglas that he survives financially by running a delivery service using the van he inherited from his father (running two different jobs largely explaining the lack of hobbies). This was his only inheritance (apart from a tool kit and multimeter) because his father believed he would waste any money he received trying to become a pilot. He has two siblings, Caitlin, now a traffic warden and Simon, a council administrator who often frustrates Martin with his annoying superiority. This isn't helped by his Mother's constant admiration of Simon, often saying that "Simon knows best".

First Officer Douglas Richardson (Roger Allam) is, on the other hand, a quite competent pilot who worked for Air England – until he was fired for smuggling. He chafes at his subordinate position to Martin, and misses no opportunity to flaunt his superiority in the younger pilot's face. In later episodes, it is revealed that Douglas, ashamed of his second-rate job, dresses in Captain's uniform for his wife Helena's benefit, changing to First Officer's uniform before he gets to work. Douglas is, however, something of a smooth operator who knows all of the dodges available to airline officers, and enjoys taking part in all of them.

Carolyn's son Arthur Shappey (John Finnemore) is an eager and cheery dimwit aged 29, who is supposed to be the flight attendant but usually manages to get in everyone's way. He is half-English and half-Australian; Carolyn is his English mother, and Gordon, Carolyn's ex-husband, his Australian father (original owner of Gertie). Arthur is a relentless optimist, whose biggest claim to fame is being the inventor (or at least discoverer) of fizzy yoghurt (the recipe for which is yoghurt plus time). He also celebrates Birling day, Birling day eve, Gertie's birthday and Summer Christmas, and is a definite polar bear enthusiast and expert. He is very allergic to dragon fruit and strawberries, but frequently forgets, having eaten strawberry mousse on occasion.

MJN are flying an actress, for whom Arthur has a particular fondness and Carolyn not so much, to Cremona. Martin tries in vain to impress her but instead attracts her ire when she blames him for a horde of her fans showing up at her hotel. Douglas saves Martin from her anger with a dozen black shirts.