Today's artists gauzy sound, by his own admission, was something of a happy accident, those sheets of shimmering guitars originally intended to disguise his modest technical skills. And his innovations went on to inspire a legion of imitators, though few ever improved upon his approach. That mysterious assemblage of patch chords and pedals at some point evolved from a sound to his sound, a sonic palette with a personality all its own, it shouldn't come as a surprise then that his path crossed with a minimalist composer and together they would come up with some lush soundscapes. ..... N'Joy

The chief sound architect of Cocteau Twins, Robin Guthrie and his reverb-drenched guitar textures have had a significant impact on alternative music since the early '80s. Numerous acts have emulated his style, and several others -- including Felt, the Gun Club, the Veldt, Ian McCulloch, Lush, and The Wolfgang Press-- have enlisted his production skills. During his career Guthrie (born 4 January 1962) has played guitar, bass guitar, keyboards, drums and other musical instruments, in addition to programming, sampling and sound processing.

Following the break-up of the Cocteau Twins in 1998, Guthrie released his first solo record, Imperial, in 2003 on Bella Union Records. Guthrie's next release, which was co-written with Harold Budd, was the film score for Gregg Araki's Mysterious Skin. The soundtrack was released in May 2005 by Commotion and consists of 15 complete songs based on the short pieces used in the film.

Guthrie has also collaborated with singer Siobhan de Maré (formerly of Mono) as the band Violet Indiana. Their first full-length album, Roulette, was released in 2001. A second album, Russian Doll, followed in 2004. In March 2006 Guthrie reported on his weblog that the group had started work again on new material.

In 2006, Guthrie signed a four-album solo deal with Darla Records, the first product of which was the album Continental. He subsequently released two four-track EPs, Everlasting and Waiting for Dawn.Two more collaborations with Harold Budd (who had previously announced his musical retirement) were released simultaneously in 2007. After the Night Falls and Before the Day Breaks were both co-composed, co-produced and played with Budd. Like the soundtrack to Mysterious Skin, both albums are slow, drifting pieces primarily utilising treated guitar and piano.

A year later, he scored the Dany Saadia-directed film 3:19; the score was also issued on Darla. Yet another ambient album for Darla, Carousel, came in 2009, as well as the Angel Falls and Songs to Help My Children Sleep EPs and the full-length Mirrorball, a collaboration with John Foxx.

A further EP Sunflower Stories was released in March 2010, Guthrie's most recent releases are Emeralds (2011) and two collaboration albums with Harold Budd, Bordeaux and Winter Garden (with Eraldo Bernocchi) (both 2011). He played guitar on the Telefon Tel Aviv track "The Sky Is Black", from The Birds EP (2012). Guthrie released Fortune, his newest full length album on 26 November 2012.

Guthrie currently tours live under the name "The Robin Guthrie Trio" consisting of himself, Steve Wheeler (on bass) & Antti Mäkinen (on drums). He currently works and lives in France with his wife Florence, their daughter Violette, and Lucy Belle, his daughter with Elizabeth Fraser.

The American ambient/neo-classical composer who has most closely allied himself with the increasingly sympathetic independent rock underground -- through his collaborations with the Cocteau Twins' Robin Guthrie -- Harold Budd is also one of the very few who can very rightly be called an ambient composer. His music, a sparse and tonal wash of keyboard treatments, was inspired by a boyhood spent listening to the buzz of telephone wires near his home in the Mojave Desert town of Victorville, CA (though he was born in nearby Los Angeles). Though interested in music from an early age, Budd was 30, already married, and with children of his own by the time he graduated from the University of Southern California with a degree in musical composition in 1966. He became a respected name in the circle of minimalist and avant-garde composers based in Southern California during the late '60s, premiering his works "The Candy-Apple Revision" and "Unspecified D-Flat Major Chord and Lirio" around the area. In 1970, he began a teaching career at the California Institute of Arts, but continued to compose while there, writing "Madrigals of the Rose Angel" in 1972.

After leaving the Institute in 1976, Budd gained a recording contract with the Brian Eno-affiliated EG Records, and released his debut album, The Pavilion of Dreams, in 1978. Two years later, he collaborated with Eno on one of the landmark albums of the ambient style, Ambient 2: The Plateaux of Mirrors. After recording two albums for Cantil in 1981 (The Serpent [In Quicksilver]) and 1984 (Abandoned Cities), Budd again worked with Eno on 1984's The Pearl. A contract with Eno's Opal Records resulted in one of Budd's most glorious albums, The White Arcades, recorded in Edinburgh with Robin Guthrie of the Cocteau Twins. Budd left Opal after 1991's By the Dawn's Early Light, and recorded two albums for Gyroscope: Music for 3 Pianos (with Ruben Garcia and Daniel Lentz) and the lauded Through the Hill, a collaboration with Andy Partridge of XTC. In the mid-'90s, he recorded albums for New Albion and All Saints before signing to Atlantic for the release of The Room in mid-2000.

In 2004, Budd decided to retire, claiming he had said all he wanted to, and that he "didn't mind disappearing." His "final" outing, Avalon Sutra/As Long as I Can See My Breath, appeared on David Sylvian's Samhadi Sound imprint as a double disc. The album featured 14 new pieces, some recorded solo, some recorded with saxophonist Jon Gibson, and some with a string quartet. Budd apparently changed his mind about retirement and his collaboration with Eraldo Bernocchi, Fragments from the Inside, issued on Sub Rosa, arrived in the spring of 2005. Back to composing and recording, Budd signed to Darla in late 2007. He began working with producer Clive Wright that same year. Song for Lost Blossoms was issued in 2008, followed by the release of Candylion in mid-2009; the pair also worked together on 2010's Little Windows.

This is a gorgeous fusion of evocative, dreamy sound, courtesy of Harold Budd & the Cocteau Twins, whose styles mesh as if made for each other. The music conjures ghosts, memories, winter stars, whispers of frost ... and yet there's a floating, detached warmth to it all, as well. It's the sound of crushed diamonds, languid chimes of ice, hushed thunder, blind white birds silently circling under the polar night skies ... it's a tangible chill that paradoxically nestles & soothes the listener, without ever becoming pointless New Age noodling. Absolutely perfect for introspection, reflection, drifting ...

Although this album is not really a successful collaboration - there are five tracks which are in the Cocteau's vein and three which resemble Budd's mid-'80s work - the pure beauty and consistency of the music here is impressive. The music takes a rather subdued path, but a few songs are among the best either artist has ever done. The first fifteen seconds of "Sea, swallow me" are awesome: Budd's wonderful piano theme suddenly crashes into a mighty wall of sound, made of ringing guitar chords, nautical bass lines, and slow-motion drums. The spacy, peacefully floating "She will.." features a saxophone solo by Dif Juz's Richard Thomas, and "Ooze out.." slowly builds intensity before a furious finale. Some people will probably balk at the more dissonant "Memory gongs" (this track also appears on Budd's "Lovely thunder" album, it's called "Flowered knife shadows" there) and the meandering, improvised "The ghost..", but these pieces work best as background music, anyway. "Why do you love me?" with its pearling piano runs and lurking guitar feedback is another stand-out track here. Essential for fans of dream pop.

A director seeking a spare, evocative, and highly ambient soundtrack would be hard-pressed to find a better duo than ex-Cocteau Twins guitarist Robin Guthrie and minimalist composer Harold Budd. Such was the case for director Gregg Araki, who got Guthrie and Budd to score his thoughtful drama MYSTERIOUS SKIN, a story of young adulthood based on the novel by Scott Heim. Those familiar with Guthrie's work with the Cocteau Twins or Violet Indiana will recognize his reverb-soaked guitar work, and fans of Harold Budd (whose collaborations with Brain Eno, in particular, are essential listening for ambient fans) will find much to appreciate here. 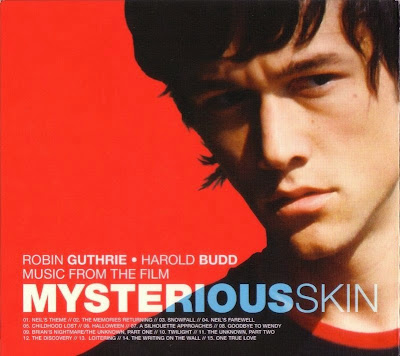 Robin Guthrie and Harold Budd go back to 1986, specifically The Moon and the Melodies, a collaboration between the Cocteau Twins and the pianist. Guthrie aided Budd on 1988's The White Arcades, and the pair resumed their relationship roughly 16 years later to record the score to Gregg Araki's Mysterious Skin. During the spring of 2006, they recorded together again for five days, resulting in the synchronously released After the Night Falls and Before the Day Breaks. Anyone familiar with anything either musician has done together -- or, to a somewhat lesser extent, apart from one another -- won't be surprised by their output here. They shouldn't be left unsatisfied, either, as the instrumental pieces are as gorgeous (yet subdued) and expansive (yet intimate) as imaginable. Though this material could just as easily function as a score, it differs from Mysterious Skin in that it is a little more tangible, like there might've been more effort put into fully engaging the listener. As expected, percussion is almost entirely absent, with the exception of an elusive pulse and some very distant snare rolls.

Recorded during the same time and issued on the same day as After the Night Falls, Before the Day Breaks is not radically different from its sister release. In fact, it might take a few plays of both discs to make some kind of distinction. They are equally meditative and engaging, based around heavy treatments of Robin Guthrie's guitar and Harold Budd's piano. The closer, "Turn on the Moon," is a relatively bombastic and overloaded piece involving a drum machine, crashing sonics, and even some added acoustic guitar from Guthrie. Otherwise, this follows the same format as After the Night Falls -- all eerily comforting and equally suited for passive background listening and complete absorption. Cynics and casual fans will find these albums indistinguishable from one another and possibly the remainder of each artist's past. More attentive followers will know better. 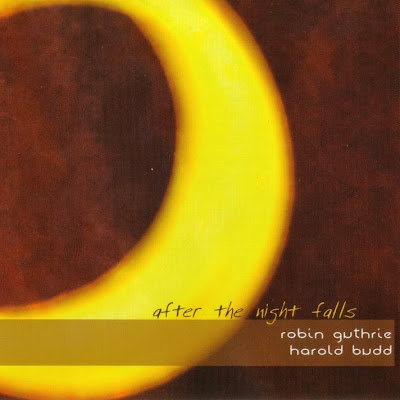 I was hoping you'd consider re-upping the FLAC version of 'After The Night Falls/Before The Day Breaks' from Robin Guthrie and Harold Budd. I'd really love to hear that one!

Thanks for taking the time to consider my request... have a great day!

Rho,
Great blog you have here full of gems. Could you reup the albums, please?

Thanks for the reup.

Could you please reup After the Night Falls?