Hello, well I hope you enjoyed the sunday, Vettel cruised to victory once again, it was his 7th victory in a row, after 22 laps he was almost half a minute in front and after that he just ran down the laps. Behind him there was plenty of action again but the supremacy of Vettel/Red Bull is driving many a F1 fan mad, after a decade of Schumacher hegemony yet another German taking possession of the limelight and by the looks of it he's set to eclipse Schumacher, something that was deemed impossible when Schumi quit. Good thing i've been a Vettel fan these last 5 years, i'll survive another 10....


The coming weeks a six-part BBC radio drama starring none other than Peter Cushing and Vincent Prince, who between them became two of the most famous horror film stars of the 1950s and 1960s. "Aliens in the Mind" is based on a story by the then-foremost "Doctor Who" script editor Robert Holmes. It centres around the discovery, on a remote Scottish island, of a community of 'human mutants' capable of telepathy. A plan is in place to use them to control the British Government, and friends Curtis Lark (Vincent Price) and Hugh Baxter (Peter Cushing) join forces to combat them.  ... NJoy 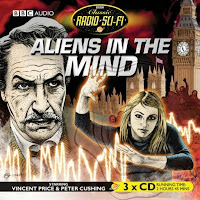