Today we finally leave Mali after more then 3 months, it were females that introduced the country, it seems befitting that they would have the last word as well, and as these things go they call on their sisters from neighbouring Mauritania to take us further on this tour of Africa  ......N'joy

Bamako, the capital of Mali, is derived from a word that means "crocodile swamp." Take that as a metaphor for this landlocked country, the largest in West Africa. Seven centuries ago, Mali controlled much of the African gold trade; now it's the world's fifth poorest nation. If you've read Peace Corps volunteer Kris Holloway's great memoir, Monique and the Mango Rains: Two Years with a Midwife in Mali, you know the grim realities for its women --- they marry young and often die in childbirth. As for clit cutting, it's pretty much the rule. And yet the culture of Mali permits --- even encourages --- women to sing.

This isn't immediately apparent in the music from Mali I've praised on these screens. In part, that's because all of its musicians are in the shadow of the great blues guitarist (and farmer) Ali Farka Toure. And I find no singer more evocative that Boubacar Triore. That's why it gives me great pleasure to alert you to the charms of an album that features some of Mali's best-known female singers.  Although you may not know of these women, this is spirited music, subtle and sophisticated and rich with unexpected harmonies and rhythms. It's backed by instruments that sound, at first, wondrous strange --- a modified harp and a xylophone, for example --- and then just wondrous. These divas are Q-tips for the imagination.

Listening to "Divas of Mali" reminds me of the myth of the terrible emperor, who threw his victims into a giant copper pot --- and then heated the pot. But the vessel was so shaped that, as the heat became more and more intense, the screams of the victims sounded more and more like beautiful music. So it is here. Out of terrible poverty and centuries of oppression, these singers find great energy, strength and joy. You won't understand the words and there's no lyric sheet to give you a clue, but it won't matter --- you can't mistake the exuberance of these far too low-profile divas. 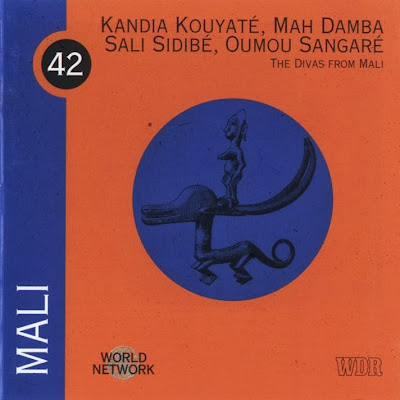 Known as ‘The Diva of the Desert’ Dimi Mint Abba’s popularity was founded upon her powerfully intense live performances. She only recorded a few albums and rarely appeared in Europe yet inspired a huge following across Africa and the Middle East.

Dimi Mint Abba (25 December 1958 – 4 June 2011) was one of Mauritania's most famous musicians. She was born Loula Bint Siddaty Ould Abba in 1958 into a low-caste ("iggawin") family specializing in the griot tradition. Dimi's parents were both musicians (her father had been asked to compose the Mauritanian national anthem), and she began playing at an early age. Her professional career began in 1976, when she sang on the radio and then competed, the following year, in the Umm Kulthum Contest in Tunis. Her winning song "Sawt Elfan" ("Art's Plume") has the refrain "Art's Plume is a balsam, a weapon and a guide enlightening the spirit of men", which can be interpreted to mean that artists play a more important role than warriors in society.

Her first international release was on the World Circuit record label, following a recommendation from Ali Farka Touré. On this album, she was accompanied by her husband Khalifa Ould Eide and her two daughters. Later she composed famous and popular Mauritanian songs like "Hailala" and "Koumba bay bay". She died in June, 2011, in Casablanca, Morocco following a stage accident in Aioun ten days earlier when she was singing for Sahrawi public. She died of a cerebral hemorrhage. Her death was described as "a national loss" by Mohamed Ould Abdel Aziz, the President of Mauritania.

This is one of her first recording from the early 90s (originally released by Auvidis in 1989), where she plays with her husband Khalifa Ould Eide. Listen to her powerful voice, accompanied by the 'ardin', a fourteen-string relative of the kora, also used as a percussion, whilst Khalifa plays the tidinit, a four-stringed lute. The tbal, a large kettle drum, is also heard. In 1992 she recorded a second album, Music and Songs of Mauritania for the French record label, Auvidis. A very nice mix of arab and manding music emanates from this album. 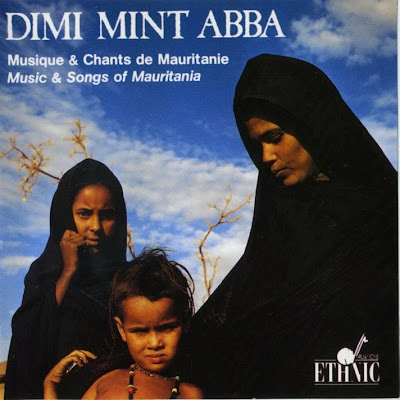 Malouma is from Mauritania, the West African country that is mostly desert, right up to where it hits the Atlantic. Her melodies are from a similar musical background as Tinariwen's, but where their bluesy guitars mesh perfectly with the vocals,

"Recorded in France with her own nine-strong band to provide plenty of Moorish authenticity, the sound is boldly augmented by the electric guitars of Pierre Fuchard, the keyboards of Bojan Z and the electronic programming of Smadj. From the chiming guitars of the lovely opener Khayala to the Islamic-gospel of the a cappella hymn that closes the album, the result is a rich melting pot of contrasting styles, bound into a cohesive whole by the striking tones of Malouma's keening voice. She also wrote all but one of the songs and is a composer of quite dazzling diversity: Gamly is a pounding, beat-laden monster; the rugged, haunting desert blues of Yarab will appeal to Tinariwen fans; Casablanca is a delightful slice of African reggae-pop; and the gentle, acoustic lullaby Habib is reminiscent of the work of the Algerian star Souad Massi.

Malouma's album, Nour, features a rich melting-pot of sounds with vibrant electric guitars and dance beats weaving in and out of traditional instruments and songs. The Mauritanian singer pulls off this astonishing mix with great dexterity, stirring vocals binding her diverse musical ingredients into a cohesive whole. Nour mines the same rich vein as Malouma's previous albums, featuring interesting musical mixes such as Gamly (where bass and pounding keyboards transform her into the modern queen of the dancefloor) and Yarab (with thrilling electric guitar solos set to a bluesy rhythm). Refusing all attempts at musical pigeon-holing, Mauritania's modern-day "griotte" cuts across musical genres, charming listeners with everything from an acoustic lullaby (Habib) and an a cappella melody (Nour) to a quirky reggae-pop fusion (Casablanca) and the nostalgia-infused ballad Yemma.

Malouma's distinctive voice runs throughout the album, pulling disparate musical threads together as she shows off her impressive vocal and emotional range, imbuing her songs with heartfelt joy and sadness, anger and tenderness. The desert diva was joined in the studio by a group of fifteen musicians, playing 'ud, drums, bass, percussion, guitars and the gumbass (a guimbri body with a bass-style neck) and special guest stars on the album include Bojan Z, the pianist Eric Legnini and clarinettist Guillaume Humery. Nour, produced by Philippe Teissier du Cros (renowned for his work with Magic Malik, Rokia Traoré and on Vincent Ségal's solo albums), comes as a veritable ray of sunshine - not surprising then to learn that the album title, "Nour", is an Arabic word meaning "light. " 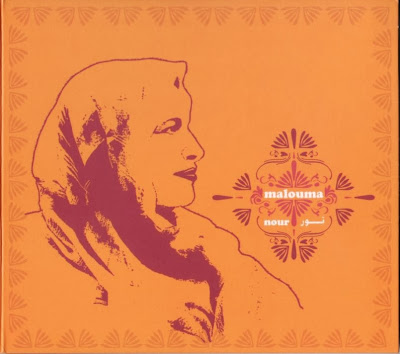 Leaving Mali with a nice compilation and entering Mauritania with these two recordings!
Malouma and Dimi totaly different but so recognizable.
Didn't need to dl, so started playing these to discs immediately, while I write this.
Thank you, left me wondering what's next ....

any chance to get these albums re-upped?
MTIA !

Hi, could you re-up this album please? Thank you very much, Chris