Solaris is a 1961 philosophical science fiction novel by Polish writer Stanisław Lem. The book centers upon the themes of the nature of human memory, experience and the ultimate inadequacy of communication between human and non-human species.
In probing and examining the oceanic surface of the planet Solaris from a hovering research station the human scientists are, in turn, being apparently studied by the sentient planet itself, which probes for and examines the thoughts of the human beings who are analyzing it. Solaris has the ability to cast their secret, guilty concerns into a material form, for each scientist to personally confront. Solaris is one of Lem’s philosophic explorations of man’s anthropomorphic limitations. ..N'joy.

During the Soviet era, Polish writer Stanislaw Lem was the most celebrated SF author in the Communist world. Although he read Western SF when he was young, he soon found it shallow and turned for inspiration to the long tradition of Eastern European philosophical fantasy. Western readers not familiar with this tradition often misread his works, expecting more action-oriented, technophilic fiction. Solaris comes closer to being a traditional SF novel than most of his works, but its main thrust is still philosophical. There is a deep strain of irony which runs through this work, for all its occasionally grim moments.

The great Russian experimental director Andrei Tarkovsky made an important film based on the novel which is considerably more confusing that the book. The pared-down 2002 version by Steven Soderbergh keeps amazingly close--for a Hollywood film--to Lem's original themes and ideas, but its emotional inertness prevents it from having the full effect intended. This is one case where reading the book before seeing the film may help you to experience the intended effect better. Perhaps Soderbergh remembered the anguish of Kelvin so clearly from his reading that he didn't realize the need to convey it more vividly to an audience that would not share the same memories. 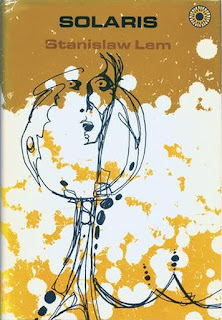 The novel begins as the narrator, a scientist named Kris Kelvin, is descending toward the surface of the mysterious planet Solaris. How many instances can you find in this chapter of failures to perceive, breakdowns in communication, etc.? This is to be the main theme of the book. Whereas conventional SF poses puzzles only to solve them, Solaris concentrates on the puzzling nature of reality and the limits of science. The ship that has brought Kelvin to Solaris is called the Promethus, a name associated with civilization and enlightenment in Greek mythology, but also with condemnation to terrible torment. As he enters the station suspended above the planet's surface, note the many instances of wear, disorder and confusion. In the original Polish, Snow's name is "Snaut." What do the many concrete details given suggest about the state of things in the station? Snow's strange initial reaction to Kelvin will be explained later. What features are reminiscent of a mystery story?


Characters
The protagonist, Dr. Kris Kelvin, is a psychologist recently arrived from Earth to the space station studying the planet Solaris. He was cohabiting with Harey (Rheya in the Kilmartin/Cox translation), who committed suicide when he abandoned their relationship. Her exact double is his visitor aboard the space station and becomes an important character.

Snaut (Snow in the Kilmartin/Cox translation) is the first person Kelvin meets aboard the station, and his visitor is not shown. The last inhabitant Kelvin meets is Sartorius, the most reclusive member of the crew. He shows up only intermittently and is always suspicious of the other crewmembers. His visitor remains anonymous, yet there are indications it might be a child with a straw hat.

Gibarian, who had been an instructor of Kelvin's at university, commits suicide just hours before Kelvin arrives at the station. Gibarian's visitor was a "giant Negress" who twice appears to Kelvin; first in a hallway soon after his arrival, and then while he is examining Gibarian's cadaver. She seems to be unaware of the other humans she meets, or she simply chooses to ignore them.

Harey, who killed herself with a lethal injection after quarreling with Kelvin, returns as his visitor. Overwhelmed with conflicting emotions after confronting her, Kelvin lures the first Harey visitor into a shuttle and launches it into outer space to be rid of her. Her fate is unknown to the other scientists. Snaut suggests hailing Harey's shuttle to learn her condition, but Kelvin objects. Harey soon reappears but with no memory of the shuttle incident. Moreover, the second Harey becomes aware of her transient nature and is haunted by being Solaris's means-to-an-end, affecting Kelvin in unknown ways.

Could you reup this ?