The coming weeks we focus on an American singer-songwriter, actor, and producer. He was one of the creative influences behind the southern soul music label Stax Records, where he served both as an in-house songwriter and as a record producer, teaming with his partner David Porter during the mid-1960s. Hayes, Porter, Bill Withers, the Sherman Brothers, Steve Cropper, and John Fogerty were inducted into the Songwriters Hall of Fame in 2005 in recognition of writing scores of notable songs for themselves, the duo Sam & Dave, Carla Thomas, and others. He is also a 2002 inductee into the Rock and Roll Hall of Fame. We'll start at the beginning ......N'joy

Few figures exerted greater influence over the music of the 1960s and 1970s than Isaac Hayes; after laying the groundwork for the Memphis soul sound through his work with Stax-Volt Records, Hayes began a highly successful solo career which predated not only the disco movement but also the evolution of rap.

Hayes was born on August 20, 1942, in Covington, TN; his parents died during his infancy, and he was raised by his grandparents. After making his public debut singing in church at the age of five, he taught himself piano, organ, and saxophone before moving to Memphis to perform on the city's club circuit in a series of short-lived groups like Sir Isaac and the Doo-Dads, the Teen Tones, and Sir Calvin and His Swinging Cats. In 1962, he began his recording career, cutting sides for a variety of local labels.

Two years later, Hayes began playing sax with the Mar-Keys, which resulted in the beginning of his long association with Stax Records. After playing on several sessions for Otis Redding, Hayes was tapped to play keyboards in the Stax house band, and eventually established a partnership with songwriter David Porter. Under the name the Soul Children, the Hayes-Porter duo composed some 200 songs, reeling off a string of hits for Stax luminaries like Sam & Dave (the brilliant "When Something Is Wrong with My Baby," "Soul Man," and "Hold on, I'm Comin'"), Carla Thomas ("B-A-B-Y"), and Johnnie Taylor ("I Got to Love Somebody's Baby," "I Had a Dream").

In 1967, Hayes issued his debut solo LP Presenting Isaac Hayes, a loose, jazz-flavored effort recorded in the early-morning hours following a raucous Stax party. With the release of 1969's landmark Hot Buttered Soul, he made his commercial breakthrough; the record's adventuresome structure (comprising four lengthy songs), ornate arrangements, and sensual grooves -- combined with the imposing figure cut by his shaven head, omnipresent sunglasses, and fondness for gold jewelry -- made Hayes one of the most distinctive figures in music.

After a pair of 1970 releases, The Isaac Hayes Movement and To Be Continued, he reached his commercial zenith in 1971 with the release of Shaft, the score from the Gordon Parks film of the same name. Not only did the album win Hayes an Academy Award for Best Score (the first African-American composer to garner such an honor), but the single "Theme from Shaft," a masterful blend of prime funk and pre-rap monologues, became a number one hit.

After 1971's superb Black Moses and 1973's Joy, Hayes composed two 1974 soundtracks, Tough Guys and Truck Turner (in which he also starred). By 1975, relations with Stax had disintegrated following a battle over royalties, and soon he severed his ties with the label to form his own Hot Buttered Soul imprint. Although both 1975's Chocolate Chip and 1976's Groove-a-Thon went gold, his records of the period attracted considerably less attention than prior efforts; combined with poor management and business associations, Hayes had no choice but to file for bankruptcy in 1976.

After the 1977 double-LP A Man and a Woman, recorded with Dionne Warwick, Hayes began a comeback on the strength of the hit singles "Zeke the Freak," "Don't Let Go." and "Do You Wanna Make Love." Following the success of his 1979 collection of duets with Millie Jackson titled Royal Rappins, he issued a pair of solo records, 1980's And Once Again and 1981's Lifetime Thing before retiring from music for five years. After returning in 1986 with the LP U Turn and the Top Ten R&B hit "Ike's Rap," Hayes surfaced two years later with Love Attack before again dropping out of music to focus on acting.

In 1995, fully enshrined as one of the forefathers of hip-hop and newly converted to Scientology, Hayes emerged with two concurrent releases, the vocal Branded and instrumental Raw and Refined. Under the official name Nene Katey Ocansey I, he also served as a member of the royal family of the African nation of Ghana while continuing simultaneous careers as an actor, composer, and humanitarian. In 1997, Hayes provided the voice of what was slated to be a one-time character on the animated series South Park -- Jerome "Chef" McElroy, the main characters' favorite school cafeteria worker. Hayes was an instant hit, and Chef became a regular character on the show, lending advice and, oftentimes, breaking into songs that gently sent up Hayes' image as one of R&B's ultimate love men.

South Park made Hayes more visible than ever and cemented his status as an icon with a whole new generation. He contributed the infamous "Chocolate Salty Balls" to the South Park tie-in album Chef Aid, and naturally appeared in the film South Park: Bigger, Longer, Uncut. (He left the show only after an episode made fun of Scientology.) In 2000, Hayes revisited his biggest triumph of the past by appearing in the remake of Shaft starring Samuel L. Jackson. The following year, he supported Alicia Keys as a musician and arranger on her acclaimed debut, Songs in A Minor.

On August 5, 2003, Hayes was honored as a BMI Icon at the 2003 BMI Urban Awards for his enduring influence on generations of music makers. Throughout his songwriting career, Hayes received five BMI R&B Awards, two BMI Pop Awards, two BMI Urban Awards and six Million-Air citations. As of 2008, his songs generated more than 12 million performances. Although he recorded little during the 2000s, he appeared in many films, including 2004's Hustle and Flow. Hayes was in ill health on August 10, 2008, when he collapsed at his home in Memphis and was pronounced dead later that day of a stroke due to high blood pressure.

Released in late 1970 on the heels of two chart-topping albums, Hot Buttered Soul (1969) and The Isaac Hayes Movement (also 1970), Isaac Hayes and the Bar-Kays retain their successful approach on those landmark albums for To Be Continued, another number one album. Again, the album features four songs that span far beyond traditional radio-friendly length, featuring important mood-establishing instrumental segments just as emotive and striking as Hayes' crooning. Nothing here is quite as perfect as "Walk on By," and the album feels a bit churned out, but To Be Continued no doubt has its share of highlights, the most notable being "You've Lost That Lovin' Feelin'." The album's most epic moment opens with light strings and horns, vamping poetically for several minutes before Hayes even utters a breath; then, once the singer delivers the song's orchestral chorus, the album hits its sentimental peak -- Hayes elevating a common standard to heavenly heights once again. Elsewhere, "Our Day Will Come" features a nice concluding instrumental segment driven by a proto-hip-hop beat that proves just how ahead of his time Hayes was during his early-'70s cycle of Enterprise albums. It's tempting to slight this album when holding it up against Hayes' best albums from this same era, but a comparison such as this is unfair. Even if Ike isn't doing anything here that he didn't do on his two preceding albums -- Hot Buttered Soul, The Isaac Hayes Movement -- and isn't quite as daring as he is on his two successive albums -- Black Moses, Shaft -- To Be Continued still topples any Hayes album that came after 1971. It didn't top the R&B album chart for 11 weeks on accident -- this is quintessential early-'70s Isaac Hayes, and that alone makes it a classic soul album. 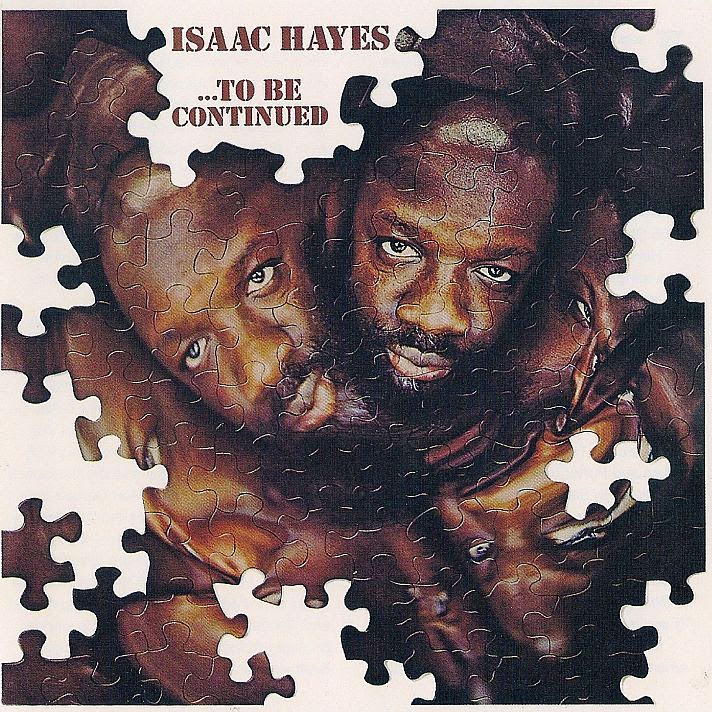 Of the many wonderful blaxpoitation soundtracks to emerge during the early '70s, Shaft certainly deserves mention as not only one of the most lasting but also one of the most successful. Isaac Hayes was undoubtedly one of the era's most accomplished soul artists, having helped elevate Stax to its esteemed status; therefore, his being chosen to score such a high-profile major-studio film shouldn't seem like a surprise. And with "Theme from Shaft," he delivered an anthem just as ambitious and revered as the film itself, a song that has only grown more treasured over the years, after having been an enormously popular hit at the time of its release. Besides this song, though, there aren't too many more radio-targeted moments here. "Soulsville" operates effectively as the sort of downtempo ballad Hayes was most known for, just as the almost 20-minute "Do Your Thing" showcased just how impressive the Bar-Kays had become, stretching the song to unseen limits with their inventive, funky jamming. For the most part, though, this double-LP features nothing but cinematic moments of instrumentation, composed and produced by Hayes while being performed by the Bar-Kays -- some downtempo, others quite jazzy, nothing too funky, though. Even if it's not quite as enjoyable as Curtis Mayfield's Superfly due to its emphasis on instrumentals, Shaft still remains a powerful record; one of Hayes' pinnacle moments for sure. 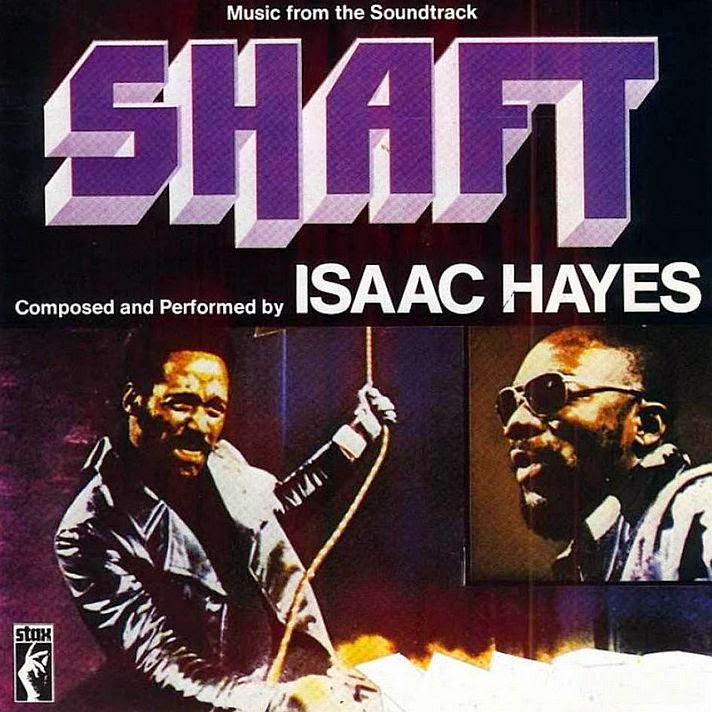 The sheer tenacity -- albeit undeniably fitting -- of this double-disc set has made Black Moses (1971) one of Isaac Hayes' most revered and best-known works. The multi-instrumental singer/songwriter and producer had been a central figure in the Memphis soul music revolution of the mid-1960s. Along with Booker T. and The MG's, Hayes' wrote and performed on more Stax sides than any other single artist. By the time of this release -- his fifth overall, and first two-record set -- Hayes had firmly established himself as a progressive soul artist. His stretched out and well-developed R&B jams, as well as his husky-voiced sexy spoken "raps" became key components in his signature sound. Black Moses not only incorporates those leitmotifs, but also reaffirms Hayes abilities as an unmistakably original arranger. Although a majority of the album consists of cover material, all the scores have been reconfigured and adapted in such a fundamental way that, for some listeners, these renditions serve as definitive. This is certainly true of the extended reworkings of Jerry Butler's "Brand New Me," or Esther Phillips' "You're Love Is So Doggone Good" -- both of which are prefaced by the spoken prelude to coitus found in each respective installment of "Ike's Rap." The pair of Curtis Mayfield tunes -- "Man's Temptation" and "Need to Belong to Someone" -- are also worth noting for the layers of tastefully scored orchestration -- from both Hayes and his long-time associate Johnny Allen. The pair's efforts remain fresh and discerning, rather than the dated ersatz strings and horn sections that imitators were glutting the soul and pop charts and airwaves with in the mid-1970s. Hayes' own composition, "Good Love," recalls the upbeat and jive talkin' "Hyperbolicsyllabicsesquedalymistic" from Hot Buttered Soul (1969), adding some spicy and sexy double-entendre in the chorus. Wisely, the CD reissue also reproduced Chester Higgins' original tongue-in-cheek liner note essay giving the history and mythology of the Black Moses persona. 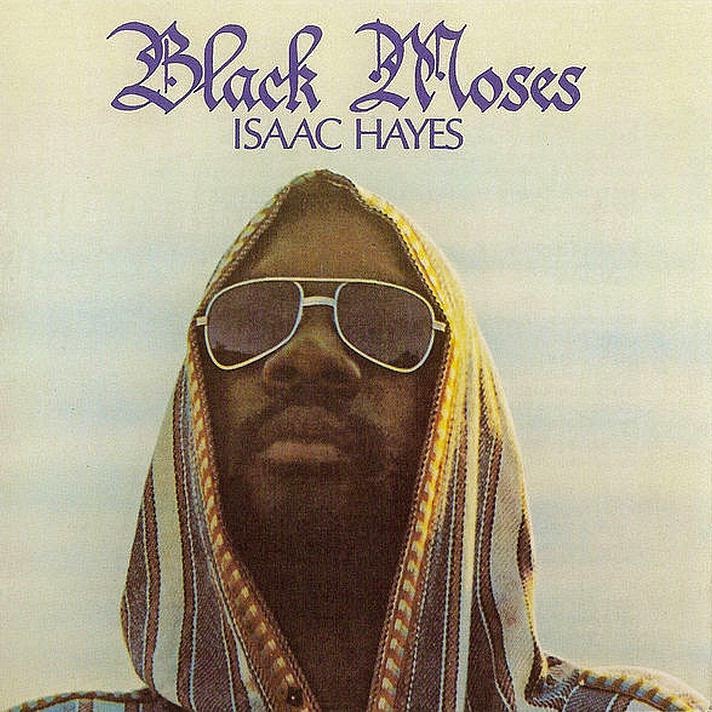 Hi Rho,
Would you please be so kind as to repost "To Be Continued"? Thanks!

Thanks for the re-post!