Hello, not much going on today, Vettel cruising to another victory as did Djokovic, UK sportsfans have to make do with England beating San Marino (google that). Ok there was the other Red Bull star today, Felix Baumgartner who jumped out of a pod 39km above the earth's surface and broke the soundbarrier on his way down reaching a speed of 1342 km/h, got himself out of a dangerous spin and landed safely after a 10 min trip down. Ending another silly endeavour we drama seeking humans seem to love.

Now listen to the continuing saga of The Byron Chronicles ...NJoy

From The Byron Chronicles Introduction

“Imagine if the world as you know it… was nothing more than an illusion. What if creatures like elves, dragons, vampires, zombies and werewolves walk amongst you every day… But you never see them.”

“This is the world I walk in.
I am called Byron
And these are my chronicles…“

The Byron Chronicles is a dark urban fantasy written and produced by Darker Projects, an audio drama company with an extensive website.  The site is well laid out and all of their shows can be heard free of charge direct from the website or  as podcasts, while your on  the go. The Darker Projects website hosts many shows, but I have chosen to focus on The Byron Chronicles for this review. 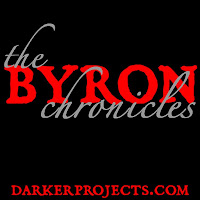 The Byron chronicles center around a being simply called Byron, who is something “other than human”. Byron lives in the shadows of our modern world, where vampires, werewolves and other creatures of fantasy are very real, but kept hidden from human eyes. The separation of  the supernatural world from the human world is an important element through out the entire series. We quickly find out that when the two worlds mix violence  seems to ensue, usually leading to bad things for humans and supernaturals alike. In fact, the only person who seems to think humans and supernatural beings can get along is Byron himself, who tends to act as a mediator between the two.

Joining Byron on these adventures is Miss Chris Sparrow, who once led a “normal life” as a Barrista at a local Portland Oregon coffee shop before being turned into a half vampire in a freak accident. Chris turned to Byron reluctantly at first, but the pair quickly became fast friends as Chris came to rely on Byron for guidance while supernatural world revealed itself to her. Byron in turn, seemed to rely on Chris in helping him better understand humans as a whole. There were several plot lines in the first season, including Byron saving the life of Lazarus the First Zombie, and preventing a worldwide zombie outbreak in the process. Then Byron had to hunt down a vampire lord named Branlaven, who was selling a super drug called “rush” on the streets of Portland. It was the drug Rush which caused Chris to become a half vampire, and it was here that Chris Sparrow made her first appearance in the series. Next, Byron was taken hostage by two different secret societies; each one trying to save the world from “monsters” like Byron.

Under the watchful light of the full moon, an ancient law calls for justice. The Werewolves of The Blood Moon clan hunt their own. What sacrifice will be required to protect an innocent and can Byron's sanctuary protect Chris Sparrow from the hunt?