Today's Artist is a longstanding leader in contemporary electronic music, composer and multi-instrumentalist,a onetime professional motorbike racer born 1955 in La Mesa, California,  drew on the beauty and power of the earth's landscapes to create lush, meditative soundscapes influential on the emergence of ambient and trance. Drawing from a vast, unique, deeply personal authenticity, his releases cover a wide range of dynamic styles all of which bear his signature voice. For 35 years the boundaries are constantly challenged in his work, ranging in style from pure floating spaces, analog sequencer music, primordial tribal, rhythmic ambient, dark ambient, long-form 'drift ambient,' and avant garde atonal ambient.....N'Joy

A longstanding leader in contemporary electronic music, composer and multi-instrumentalist Steve Roach drew on the beauty and power of the Earth's landscapes to create lush, meditative soundscapes influential on the emergence of ambient and trance. Born in California in 1955, Roach -- inspired by the music of Tangerine Dream, Klaus Schulze, and Vangelis -- taught himself to play synthesizer at the age of 20. Debuting in 1982 with the album Now, his early work was quite reminiscent of his inspirations, but with 1984's Structures from Silence, his music began taking enormous strides. The album's expansive and mysterious atmosphere was partly inspired by the natural beauty of the southwestern U.S. Subsequent works, including 1986's three-volume Quiet Music series honed Roach's approach, his dense, swirling textures and hypnotic rhythms akin to environmental sound sculptures.

In 1988, inspired by the Peter Weir film The Last Wave, Roach journeyed to the Australian outback, with field recordings of aboriginal life inspiring his acknowledged masterpiece, the double-album Dreamtime Return. A year later, he teamed with percussionist Michael Shrieve and guitarist David Torn for The Leaving Time, an experiment in ambient jazz. After relocating to the desert outskirts of Tucson, Arizona, Roach established his own recording studio, Timeroom. In the years to follow, he grew increasingly prolific, creating both as a solo artist and in tandem with acts including Robert Rich, Michael Stearns, Jorge Reyes, and Kevin Braheny -- in all, he recorded close to two-dozen major works in the '90s alone, all of them located at different points on the space-time continuum separating modern technology and primitive music.

His album roster from that decade includes Strata (1991), Artifacts (1994), Well of Souls (1995), Amplexus (1997), and Dust to Dust (1998). Early Man was released on Projekt in early 2001, followed by one of his many collaborations with Vidna Obmana, Innerzone. Throughout the remainder of the 2000s, Roach remained extremely prolific. His release schedule included the Projekt titles Trance Spirits (with Jeffrey Fayman) and the quadruple-disc Mystic Chords & Sacred Spaces, Spirit Dome and Somewhere Else (with Obmana), Fever Dreams, Mantram, and Nada Terma (with Byron Metcalf and Mark Seelig), and the ongoing Immersion series, Arc of Passion, and Stream of Thought (with Erik Wøllo). He also self-released several titles on his own through Timeroom Editions.

Over the next decade, Roach would show no signs of slowing as he continued with a non-stop slew of new material under his own name, as well as collaborations and soundtrack work. Though new volumes of work appeared at a clip of more than three albums per year, standouts included more collaborations with Byron Metcalf, 2013's Future Flows, 2014's disparate releases of arid road trip music on The Desert Collection and ambient explorations of mortality and humanity on The Delicate Forever. Roach began constructing an extensive analog modular synthesizer system in 2014, and in 2015, the album Skeleton Keys was composed entirely using this setup. In 2016, Roach released two full-lengths with Robert Logan (the more rhythmic Biosonic and the serene drone album Second Nature), as well as solo efforts This Place to Be and Shadow of Time.

In concert, Steve creates transcendent electronic music emerging from an elemental instinctual mode. These events bring together an audience from around the country and as far away as Europe, all looking to experience the on-the-edge experience that erupts in the live setting. This makes Steve's concerts an entirely different experience from the recorded medium. With months of preparation absorbed into his system, evocative soundscapes blend with ecstatic rhythmic sections born from hands-on analog sound creation and sonic shapeshifting. The result is a direct transference of creative energy from the artist through his instruments out to the listener. Live performances are the place where Steve's music thrives, created at the leading edge of now.

Before he had a solo album, John Strate-Hootman (aka Vir Unis) collaborated on three projects with Steve Roach. Roach produced Imaginarium, Strate-Hootman's collaboration with Ma Ja Le. Roach also produced and contributed to Strate-Hootman's piece on The Ambient Expanse, "Undivided Flow." And these two ambient groove masters collaborated on The Body Electric, one of the top albums of 1999. This wild ride combines Roach's tribal sensitivities with Strate-Hootman's grooves and rhythmic sensibilities. The echoes of desert ambience collide with pulsating groove rhythms. They explode into huge atmospheres. The rhythms move around and through the soundscapes. The two sound worlds become one. This album is unlike any before it. The only logical comparisons are later releases by Roach and/or Strate-Hootman. 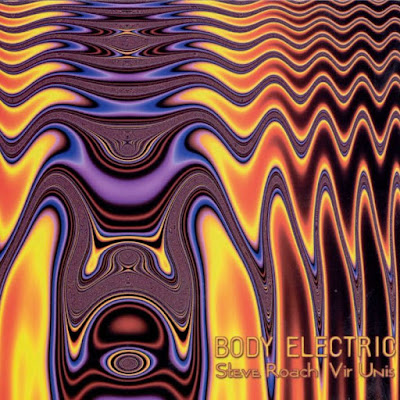 Roach's second album of 1999 is, like the first, a collaboration with Vir Unis, though the material departs Roach's usual field of geographical inspiration for the realm of visible light. The six lengthy tracks coast over waves of ambient bliss with a series of skittery percussion lines that manage to draw on the physics of light refraction quite well. Another featured player, Vidna Obmana, brings his mastery of ambient noise to the mix, though the credits are a bit difficult to cipher (Obmana: "fujara sample food performance"). With his tamboura, Stefin Gordon fills in the Eastern slant to "The Reflecting Chamber." In total, Light Fantastic is a very digital work, continually plumbing the depths of crisp sound and gong-like reverberations. As usual with material by Roach, mere descriptions fail to conjure the acres of beautiful, expansive sound produced. The analogy of light that inspired the work is perhaps the best description of all. 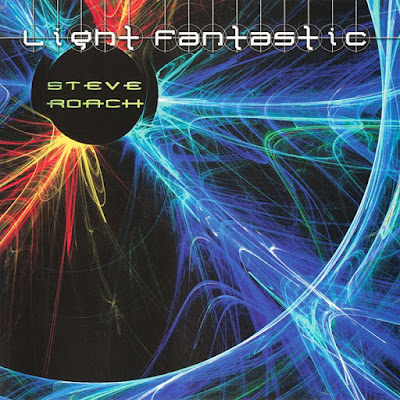 The Serpent's Lair is a shamanic journey by Steve Roach, Byron Metcalf, and a host of other musicians, including Vidna Obmana, Jorge Reyes, and Lena Stevens. The means of finding the underworld is the shaman's drum. On this double album set, all the variants on that drum are presented, from loops and shakers and frame drums, djembes, ocarinas, dumbeks, tom toms, bass drums, and many more. Each piece operates as a stage of transformation from one state to the next, from "The Lair" to the "Rite of Passage" to "Shedding the Skin" on disc one to the "Primal Passage," "Serpent Clan," and the "Beating Heart of the Mother Dragon" on disc two, with many stages in between. Rhythm being the key, the heartbeat of each piece, and bonding each musician to another, it would take Roach to meld them all in a manner that suggests the intimate, microscopic process by which not only the awareness of such a process takes place but its actual movement. Roach carries within himself the ability to shed his own skin with each new project, and with a collaboration as large as this one, he was the master of alchemy, or, as he prefers to call his contribution, "Groove Alchemy." Given the shape-shifting cross, poly, and counter rhythms produced by this tribe in Roach's "Timeroom in Arizona," all of which had to at some point speak to each other in the language brought about by the creation of the process of collaboration in the first place, there had to be sound worlds to accommodate them. Metcalf, a master percussionist, provided the impetus for the intersection of rhythms, while Roach provided both the sonic archeology and ambient architecture to erect virtual worlds of sound that existed in no other place. His "cave," or "underworld" is a place rife with images and noise. It is noted that some of the sounds occurring here can never be recreated; they were spiritual utterances from this cavern of soul travel. When, on "Rite of Passage" Lena Stevens sings, in a heavily processed voice, an ancient chant for the healing of the heart by the earth and its elements, the drummers carry that message into the earth and Roach its healing out into the world via his expanding sonic vocabulary that includes as many sounds as the various languages being spoken here can hold. On disc two, the "Offering in Waves" is a shifting, sliding rhythm of elation, of ecstasy that informs the rest of the set. When the voices of the "Cave Dwellers" begin their chant, the entire project has arrived intact, in the place where transformation begins in earnest -- all of the known is gone, left behind, nothing but ashes remain. Here, textures and colors glimmer and fade in the mix, drums are understated, speaking softly to one another in the darkness of the cave. In "Serpent Clan," the processed voice of the shaman governs the track as he gives utterance to what he sees, what he is becoming. Drums slowly grant him passage through deeper corridors into the imagination at the center of the earth. The "Beating Heart of the Dragon Mother" is the voice of the transformed shaman, all the way inside his journey. All of the individual collaborators on this project disappear into this voice, into this mix; into this sound world there is no center but that voice and its assent to the crisscrossing rhythms. Finally, in "Ochua," the collaborators all resume their individual identities, the shaman re-enters the world, informed by the vision and depth of knowledge gained in the underworld. Roach and Metcalf create an understatement of beauty, polyrhythmic grace, and sensuality as it washes over the listener like rain. That these two men could simulate with all the contradictions inherent in their cultures, the shaman's journey to the lair of the snake, and give it credence and authenticity by the singleness of their purpose is indeed commendable. While the same experience encountered by those who made this record together may not be possible to encounter, anyone who does take the time to listen to the two discs through can be assured of an experience of their own, unlike anything they've encountered before, in sound and in life. 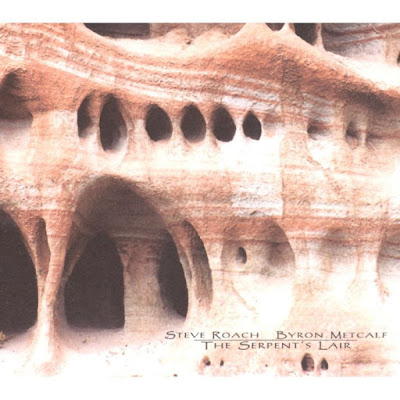 The Dream Circle shows Steve Roach at absolutely the top of his game. Originally released in 1994 as a limited, 2,500-copy release, where each copy was signed, The Dream Circle was sure to be a legend, but Roach and his Timeroom Editions label decided to do a re-release and make it more readily available to those who may have missed out, thank goodness. The Dream Circle is absolutely the best of his ambient long-form works. This recording is right up there with Quiet Music (complete) and the legendary Structures From Silence that was re-released on the Projekt label in 2001. With The Dream Circle, Roach has created one of his best and most beautifully evocative sonic atmospheres. This recording is par excellence, and comparisons to this recording are hard, but if you enjoy the ambient, atmospheric work of Vidna Obmana, James Johnson, and Robert Rich, then you will certainly enjoy this recording. This recording, though, is very Steve Roach in that it's a single long-form piece that clocks in at just under 74 minutes of completely enveloping, low-volume listening sonic mastery. This recording is absolutely a pick and a must-have for any fan of ambient atmospheric recordings 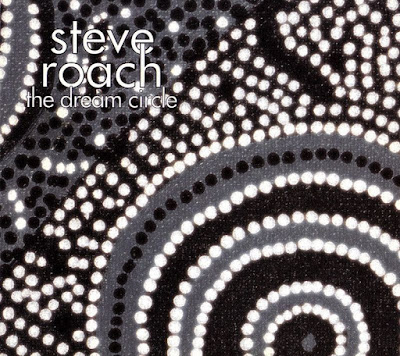 You're the best, thank you for posting Steve Roach's
excellent "ambient head music".

Oh and thank you for the excellent Carlos Casteneda series, (every one
should read his books on The Teachigs of Don Juan)

.. long for wanted! Thanks for posting

Would love to see a re-up of these Steve Roach albums, thanks in advance!