Hello, after almost 2,5 years dwelling in the South-America's music scene we step into middle-America.

The Isthmus of Panama was formed about three million years ago when the land bridge between North and South America finally became complete, and plants and animals gradually crossed it in both directions. The existence of the isthmus affected the dispersal of people, agriculture and technology throughout the American continent from the appearance of the first hunters and collectors to the era of villages and cities. The earliest discovered artifacts of indigenous peoples in Panama include Paleo-Indian projectile points.

Rubén Blades is one of the most successful vocalists in the history of Panamanian music. A former member of bands led by Ray Barretto and Willie Colón, Blades has continued to influence salsa music with his highly literate, politically tinged lyrics and his modern-minded arrangements, which substitute the usual horn and Latin percussion sections with synthesizers and drum sets. Often referred to as "the Latin Bruce Springsteen," Blades provided a musical voice for the middle class of Central America. Raised in a middle-class neighborhood in Panama City, Blades inherited his musical talents from his parents. His mother, Anoland, who emigrated from Cuba, played piano and sang in Spanish. His father, Ruben Sr., a police detective, played bongos.

Inspired by the doo wop singing of Frankie Lymon & the Teenagers, Blades began singing North American pop and rock songs in his early teens. In 1963, he became the lead singer of a band, the Saints, formed by his older brother, Luis. The political upheaval in Panama during the mid-'60s had a profound effect as Blades became increasingly committed to his own roots, refusing to sing in any language but his native Spanish.

While studying law at the University of Panama, Blades continued to be involved with his music, singing with Conjunto Latino and Los Salvajes del Ritmo. In 1968, an album he recorded with Bush and the Magnificos reached Joe Cuba's producer in New York. Invited to join Cuba's band, he declined in order to complete college. When the Panamanian government closed the university, he made his first trip to the United States. While in the U.S., Blades recorded an album, From Panama to New York, with Pete Rodriguez. Shortly after the album's release, the University of Panama was reopened and Blades returned to complete his undergraduate studies. Although he accepted a position as a lawyer for the Bank of Panama, following his graduation, he returned to the U.S., to visit his parents, who had emigrated to Miami, in 1974.

While in the United States, Blades traveled to New York and took a job in the mailroom of the Latin-oriented Fania record label. A year later, he replaced Tito Allen as featured vocalist in Ray Barretto's band, auditioning in Fania's mailroom. When Barretto left to form a Latin fusion group, Blades took over as bandleader and renamed the group Guarare. In 1975, Blades composed and sang lead on Barretto's recording "Canto Abacua," featured on the album Barretto. As a result, Blades was named Composer of the Year by Latin New York magazine. Blades had also been playing with Willie Colón's band, and he remained with Colón for six years. Their collaboration reached its apex with the three-million-copy-selling album Siembra, which included the single "Pedro Navaja," the biggest selling single in salsa history. Blades' politically oriented lyrics were not universally accepted. In 1980, his song "Tiburon," which spoke out against superpower intervention in the Caribbean, was banned from radio airplay in Miami.

Forming his own band, Los Seis del Solar, in 1982, Blades began to perform an exciting fusion of Latin, rock, reggae, and Caribbean music. Their debut album, Buscando América, was released in 1983. A year later, Blades enrolled in the graduate school at Harvard University, eventually receiving a master's degree in international law. Since the early '80s, Blades has balanced his musical career with acting and writing songs for such films as The Last Fight, Crossover Dreams, Critical Condition, Fatal Beauty, The Milagro Beanfield War, Dead Man Out, Disorganized Crime, The Lemon Sisters, The Two Jakes, Predator 2, One Man's War, The Josephine Baker Story, Crazy From the Heart, Color of Night, A Million to Juan, Scorpion Spring, and The Devil's Own. Blades shared the title role, with Marc Anthony, in Paul Simon's Broadway musical The Capeman.

Blades, who lives in California with his actress wife Lisa Lebenzon, has remained active with politics. The founder of a new political party in Panama, he ran for president of Panama in 1994, coming in second in the election. While much of Blades' repertoire is in the Spanish language, he recorded an English-language album, Nothing But the Truth, featuring songs by Lou Reed, Elvis Costello, and Sting, in 1988. The 1990s were relatively busy ones for Blades musically, and he released several albums, including Ruben Blades y Son del Solar...Live! (1990), Caminando (1991), Amor y Control (1994), La Rosa de los Vientos (1996), and Tiempos (1999) before stepping back a bit in the first decade of the 21st century, releasing Mundo in 2002, the Live! In Concert DVD in 2006, and De Panama a Nueva York in 2008.

In 2004, he put his artistic career on hold when he began serving a five-year appointment as Panama's minister of tourism. Beginning in June 2007, however, Blades turned some of his attention back to his artistic career, presenting an online TV show titled Show de Ruben Blades (SDRB) on his website.

In the middle of 2008 he took a leave of absence for a mini-tour in Europe, backed by the Costa Rican band Son de Tikizia. When his government service was completed in June 2009, he reunited the members of Seis del Solar for the 25th anniversary of Buscando America in an ambitious tour of the Americas.  In June 2011, Blades was given the Harry Chapin Humanitarian Award by ASCAP and WhyHunger. In 2015, Blades' album Tangos won a Grammy award for Best Latin Pop Album. In 2015, Blades was cast in the regular role of Daniel Salazar in the AMC post-apocalyptic drama Fear the Walking Dead, a companion series to The Walking Dead. Premiering in August 2015, with six episodes in its first season, the new series has been picked up by AMC for at least two seasons. Blades first appears in the second episode.

Blades has expressed his interest in making another run for president of Panama in 2019, and has noted that he might limit his future performing activities in order to do so.

A terrific find -- and a reminder that the accordion is really everywhere. Though Danzas Panama (accordion, fiddle, small guitar, percussion, voices) plays Panama's National Theatre, it also does local fiestas. The group plays various styles -- mejorana, tamborito and the like -- that are normally very separate from each other, but the playing and singing are very near the roots. 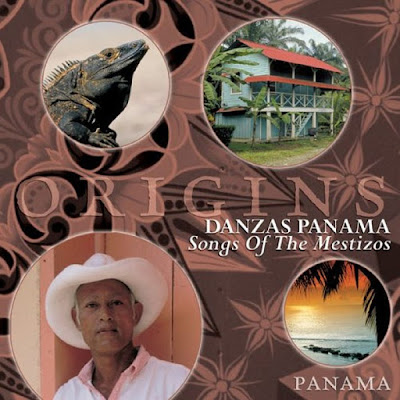 The high point of Willie Colón's ongoing collaboration with Rubén Blades (and close to a career peak for both artists), Siembra exploded on the salsa scene in 1978 and has never been forgotten by fans. Beginning with a minute of playfully deceptive quasi-disco arrangements, Colón and his band slip into a devastating salsa groove for the opener, "Plástico," on which Blades first criticizes America's throwaway society and then brings all of Latin America together with a call to unity. Blades wrote all but one of the songs on Siembra, and shines on all of them; his extended high-tenor salsa scatting lifts "Buscando Guayaba," his tender side comes across on the love song "Dime," and he outlines a devastating life-in-el-Barrio exposé with "Pedro Navaja" (Peter the Knife). For the latter, Colón and Luis Ortiz's tight arrangement adds immeasurably to the song, using street noise and sirens, breaking into an ironic "I like to live in America!," and punching the statement home with a four-trombone line. Reflecting the tough times but optimistic attitude of el Barrio during the late '70s, Siembra joined Cosa Nuestra as one of Willie Colón's career landmarks. 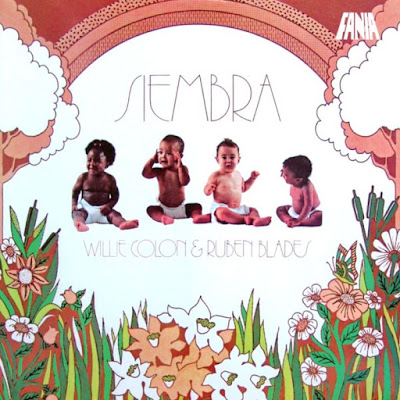 This album is fantastic in every sense. A Harvard graduate, Blades always manages to include heavy social content in his lyrics. "Caina" is a song about cocaine and how its disastrous physical and overall effects on a person's life. Very very good song. "Tierra Dura" a song about the mid-80's Ehtiopia and the tough conditions dealt in life. Another amazing part of Blades music is his ability to mix synthetic sounds and not only get away with it, but make it sound great. "Cuentas del Alma" the heavy-hearted tale of a widow and her struggles and fears she endures for the rest of her life. "Sorpresas" is the second part of the what seemed to be the concluded tale of Pedro Navaja, who fortunately for us, survives and is made into a sequel. Blades is the best singer-songwriter the business has ever seen and Escenas is just another testament to that title. Credit must be given to Seis del Solar also for their great musical performance. No surprise then Ruben winning his first Grammy Award for Escenas in 1986. 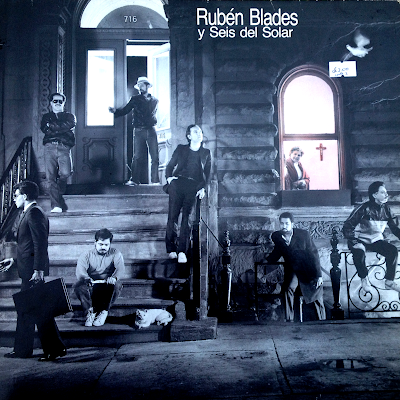 The first English-language album in the long and illustrious career of Panamanian salsa superstar Rubén Blades, Nothing But the Truth is a strong effort that, if less than great, is fascinating on several counts. The novelty of hearing Blades sing in English is certainly a big draw. He's a fine vocalist and he has the luxury of working with three of the English language's most eminent tunesmiths: Lou Reed (on the songs "Hopes on Hold," "Letters to the Vatican," and "The Calm Before the Storm"), Elvis Costello ("The Miranda Syndrome" and "Shamed into Love"), and Sting ("I Can't Say"). The one drawback to Blades' singing in English is that it lacks the fluidity of his native language, as each word is enunciated clearly yet a bit too slowly, as if he were reading the lyrics as he sang them. It helps, however, that the songs are topically engaging and generally in tune with their time (El Salvador, AIDS, Oliver North), so the unnaturally slow enunciation is a mixed blessing. Also a mixed blessing is the thoroughly contemporary, synth-heavy production, which screams out "1988!" As for the music, it varies from song to song and, overall, would best be tagged as late-'80s MOR with a Latin lilt. What's perhaps most surprising is the lack of salsa here -- "The Miranda Syndrome" and "Chameleons" are as close as this album comes to salsa, and even they're far removed -- and the abundance of foregrounded electric guitars (musically, "The Calm Before the Storm" is all blaring electric guitar and larger-than-life drums). Such oddities are a significant part of Nothing But the Truth's appeal, for better and for worse. 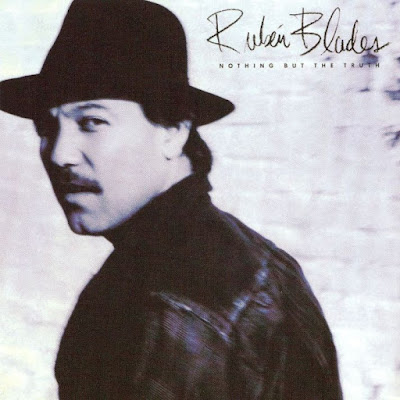 asking for a re-up for this one !
many thanks in advance!