The cumbia "crystallized", through music, the dream of Símón Bolívar: a united Latin America. From the 1940s onwards, modern cumbia spread and became popular throughout Latin America, with which it followed different commercial adaptations, such as the Argentine cumbia, the Bolivian cumbia, the Chilean cumbia, the Dominican cumbia, the Ecuadorian cumbia, the cumbia mexicana, cumbia peruana, cumbia salvadoreña, cumbia uruguaya and cumbia venezuelan, among others. Cumbia is a musical genre from Colombia, which has its origins in Africa. This genre is a mixture of the influence of slaves from Africa, Native Americans and to a lesser extent the Spanish. Being a product of the miscegenation between these cultures during the Conquest and the Colony. The cumbia gets its name from the word "Cumbé", which is a dance of the people of color of the Spanish Guinea, in West Africa. .... N'Joy

Cumbia began as a courtship dance practiced among the African population on the Caribbean coasts of Colombia. It is a mixture of Spanish, Native Colombian and African music. The style of dance is designed to recall the shackles worn around the ankles of the slaves. In the 19th century, slavery was abolished and Africans, Indians and other ethnic groups got a more complete integration in the Colombian culture.

Cumbia is a complex, rhythmic music which arose on Colombia's Atlantic coast. In its original form, cumbia bands included only percussion and vocals; modern groups include saxophones, trumpets, keyboards and trombones as well. It evolved out of native influences, combining both traditions. Some observers have claimed that the dance originally associated with iron chains around the ankle. Others still believe that it is a direct import from Guinea, which has a popular dance form called cumbe.

Cumbia's form was solidified in the 1940s when it spread from the rural countryside to urban and middle-class audiences. Mambo, big band and porro brass band influences were combined by artists like Lucho Bermúdez to form a refined form of cumbia that soon entered the Golden Age of Cumbia during the 1950s. Discos Fuentes, the largest and most influential record label in the country, was founded during this time. Fruko, known as the Godfather of Salsa, introduced Cuban salsa to Colombia and helped bring Discos Fuentes to national prominence by finding artists like La Sonora Dinamita, who brought cumbia to Mexico, where it remains popular.

It is worth pointing out that the "classic" cumbia known throughout Colombia is the Cumbia Cienaguera. This song reflects a uniquely Colombian feel known as "sabor" (flavour) and "ambiente" (atmosphere). Arguably, this song has remained a Colombian staple through the years and is widely known as Colombia's unofficial national anthem.

Discos Fuentes is a record label based in Medellín, Colombia, South America. Founded in 1934 in Cartagena, Colombia, by Antonio Fuentes Estrada, Discos Fuentes was the country's first notable record label. The label was instrumental in introducing Colombia to such Afro-rhythm genres as cumbia, fandango, merengue, porro, and salsa. The label also helped forge the early careers for such musicians and composers as Guillermo Buitrago, Rafael Escalona, and Julio César Bovea. Discos Fuentes has often been described as Colombia's version of "Motown", peaking in the 1960s and early 1970s. The label achieved a series of firsts for Colombia: the first compilation album (1960) and the first compact disc release (1987).

Soundway have compiled easily one of the most brilliant collections of Colombian grooves in existence with 'The Golden Age Of Disco Fuentes 1960-76'. They've drawn from the golden years of the country's largest record label - Disco Fuentes - to present 20 tracks of various tropical styles, from Cumbia to Salsa and Champeta, bursting at the seams with kinky cowbell polyrhythms, keys, brass and VIBES a plenty. 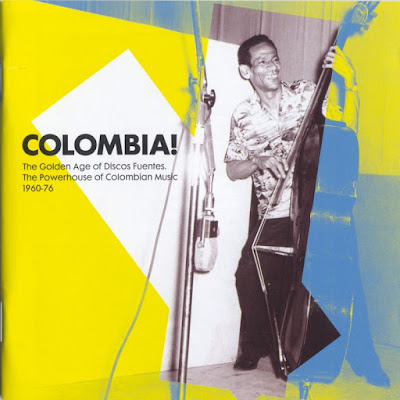 Since the late 1980s, DJs and producers have been reputed to be fierce protectors of their vinyl collections in their same way that bluesman Skip James was reputed to play facing sideways or with his back to other guitarists so they couldn't steal his licks. That said, the modern DJ has nothing on those from the picos (sound systems) of the Caribbean coast of Columbia who hid their rare, prized finds of African recordings (and the musical cultures surrounding them) secret for up to 20 years.

The 21 tracks on this stellar Soundways edition showcase the almost unbelievable musical quality that the highly competitive competitive showcased. Palenque Palenque traces the development of champeta criolla in Colombia from its African origins to its full flowering in the grand pico era between the mid-'70s and 1991 in Carategna and Barranquilla, among mainly Colombian musicians on important native labels that were played by the pico DJs -- who often tossed the covers away to protect the knowledge that recordings were made on home soil. Champeta criolla music reveals the rhythm collisions of everything from highlife and Afro-beat to soukous and compas as they influenced local musicians who in turn created new sounds, covered tunes by African artists, and made something new in the process or, in some cases, even re-created African folk and slave songs in their own image -- some of which literally dated back to earlier centuries. While there isn't a dud in the bunch, some of the album's many highlights include the psychedelic cover of Fela Kuti's "Shakara" by Lisandro Meza y Su Conjunto, here entitled "Shacalao"; Abelardo Carbonaó y Su Conjunto's celebratory, highlife-inflected "Palenque" (ever an envelope-pushing musician, he became a member of Anibal Velasquez's amazing orchestra); Rabel y Su Grupo's "Mananye"; the rhythm orgy that is Son Palenque's "Dame un Ttrago," the Afro-beat-meets-roots reggae snakiness of "Dejala Corre" by Banda los Hijos de la Niña Luz, and Wganda Kenya's overdriven "Pim Pom," where Nigerian rhythms, chant, and cumbia wrestle the listener into submission. In addition to the music -- all of which has been painstakingly remastered from original tapes or vinyl sources and sounds terrific, the accompanying 28-page booklet contains a brilliant historical essay by DJ Champeta man original, Lucas Silva, who compiled Palenque Palenque: Champeta Criolla & Afro Roots in Colombia 1975-91 with Soundways main man Miles Clerét. This is indispensable for any fan of African, Latin American, and especially, the music of the Caribbean coastline of Colombia. 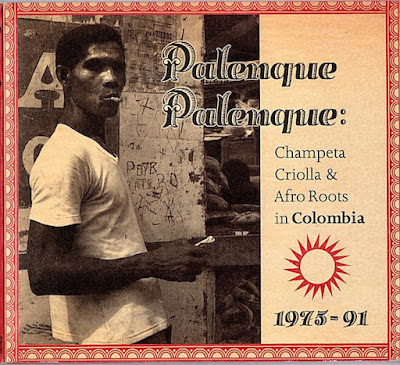 Timbales beat the intro, the thick bass enters, brassy horns and electric guitar state the theme — Rodolfo's cumbia anthem 'La Colegiala' kicks off this collection of cumbias — Colombia's most popular dance craze. Thought to be the most covered Latin song since The Peanut Vendor' and a monster hit throughout Latin America, Spain and France, Rodolfo unwittingly brought the cumbia into European consciousness through a series of t.v. and cinema coffee adverts. Rodolfo is hopelessly enamoured with 'La Colegiala' — the college girl. Having explained this he urges us to "Baile la cumbia — hasta la seis de la manana" — dance cumbia until six in the morning. . . and with that thick, heavy beat and so-catchy tune, you know you could. There's no more uplifting music in the world than the cumbia.

The first thing you feel with cumbias is that, rousing, regular beat; a distinctive, loping 2/4 gait which sets the cumbia apart from the relentless pace of the merengue or the criss-crossing of polyrhythms in Afro-Cuban salsa. As in reggae the giveaway in cumbias is the bassline; right up front and clear, real rock-steady. This collection runs the gamut of cumbia styles and covers a time scale from the 1950's to the present day. Bringing together some of the greatest and most popular performances recorded by Discos Fuentes, it is a Cumbia Showcase for Colombia's premiere record company. All the recordings have been huge hits in Colombia and many have crossed over to become hits in other countries such as Peru, Venezuela, Bolivia, Mexico and Spain. Colombia's foremost artists are featured in a collection which shows the artistry and diversity they bring to the cumbia — the rock-steady rhythm of Colombia.... 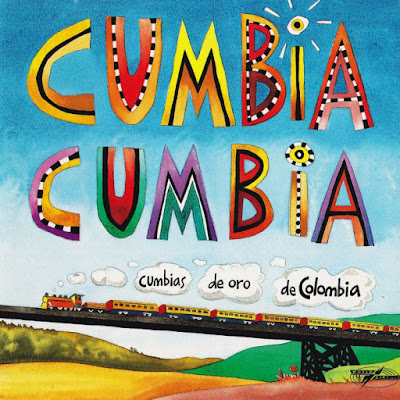 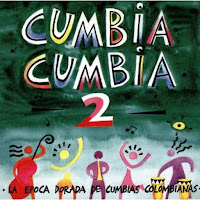 Cumbia is to Columbia what samba is to Brazil, tango is to Argentina, and merengue is to the Dominican Republic -- it isn't the country's only style of music, but it is definitely its most famous and popular. Numerous cumbia compilations have come out in the U.S., Europe, and Latin America; one of them is The Rough Guide to Cumbia. This collection, released in 2000, spans the 1950s-1990s, although it tends to favor classic cumbia over contemporary cumbia. Regrettably, World Music Network fails to provide recording dates; if the company didn't want to go to that trouble, it could have at least listed the years in which the CD's 22 tracks were released. But to the Network's credit, the sound quality is good and its choices are usually first-rate. Listeners are exposed to some of cumbia's true heavyweights thanks to classics by Lucho Bermúdez ("Columbia Tierra Querida," "Danza Negra"), Alfredo Gutiérrez ("La Banda Borracha"), Leonor González Mina ("Yo Me Llamo Cumbia"), and Jaime Llano González ("Cumbia en Azul"). Meanwhile, Lisandro Meza's "Salsipuedes" from 1991 is among the collection's more modern recordings. One thing the compilation doesn't get into is the cumbia of Mexico and the southwestern U.S., where Mexican artists have been playing their own interpretations of cumbia; this disc is Columbian all the way. The Rough Guide to Cumbia is hardly the last word on cumbia, but it's generally rewarding and can serve as a fine introduction to the style, although it would have been nice if the World Music Network had listed recording dates. 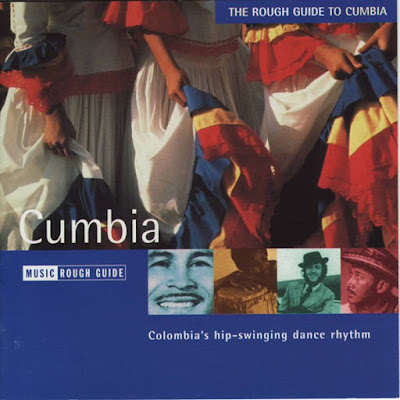 thanks for the great music. Those Rough Guide collections are so good. Sam.