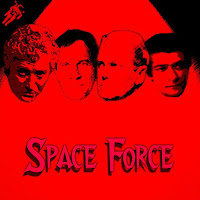 Space Force is a BBC Radio science fiction serial, broadcast from 4 April 1984 to 17 June 1985. Written by Charles Chilton, it was originally intended to be a sequel to his Journey into Space series (broadcast in the 1950s), using the cast who'd just made a one-off revival of that series ("The Return From Mars"); while this idea was dropped late in the development of the serial, the four characters are nevertheless essentially the same as those from the earlier series, albeit with different names.

The first series begins during the northern summer of 2010. Both series seem to initially mirror the first two Journey Into Space stories before branching off into quite different plots. A second series, known as Space Force 2, featured the same main characters, once again played by Barry Foster, Nigel Stock, Nicky Henson, and Tony Osoba. Within both series, Space Force is the name of the team's spaceship, rather than the name of an organisation.. ......'N Joy

Barry Foster - Captain Saxon Berry, captain of the Space Force and leader of the team. Also captained the Lunar 9 freighter for the first episode of the first series before being transferred to the Space Force.

Tony Osoba - Lodderick Sincere, The flight engineer for Space Force, a keen astronomer who sometimes is hot-headed enough to get himself and the team into trouble.

Nicky Henson - Lemuel "Chipper" Barnet , the radio operator for Space Force. The joker of the group who also struggles with the terrifying situations the team face. In a direct link to Journey into Space, Chipper refers once to his grandfather, Lemmy Barnett.

As the crew are pursued, is their time up?