Director David Lynch was known for his off beat work and with Twin Peaks his initial goal was to merge a murder mystery with a soap. His main character FBI agent Dale Cooper showed some quirky habits and mystical tendencies, but remaining firmly analytical throughout his investigations. His dictaphone always at hand and always adressing it with Diane who remained his unseen assistant......N'joy.

Created by David Lynch and Mark Frost, Twin Peaks's pilot episode was first broadcast on April 8, 1990 on the ABC Network, which led to another eleven episodes being produced, and a second season, which aired until June 10, 1991. The show is set in a small fictional Washington town known as "Twin Peaks", and was primarily filmed in the Washington towns of Snoqualmie and North Bend.

After its debut episode on April 8, 1990, Twin Peaks became a top-rating programme and was a critical success both nationally and internationally. Reflecting its devoted cult fan base, the series became a part of popular culture, referenced in other television shows, commercials, comic books, a video game, films and song lyrics. Declining viewer ratings in the long-running second season led to a cancellation. In 1992, the series spawned a prequel to the series, Twin Peaks: Fire Walk with Me (1992), which attempted to connect the events leading up to Laura Palmer's death

On the morning of February 24, in the town of Twin Peaks, Washington state, lumberjack Pete Martell discovers a naked corpse tightly wrapped in a sheet of clear plastic on the bank of a river. Following the arrival of Sheriff Harry S. Truman, his deputies, and Dr. Will Hayward on the scene, the body is discovered to be that of homecoming queen Laura Palmer, the most popular girl at the local high school. FBI Agent Dale Cooper is called in to investigate, his initial examination of Laura's body reveals a tiny typed letter 'R' inserted under her fingernail. He recognizes this as the "calling card" of a killer who took the life of Teresa Banks a year earlier. Cooper quickly establishes that Laura's character and relationships are not as they first appear, and that she's far from the wholesome homecoming queen that those closest to her believed her to be..... 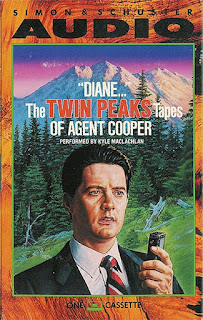 Cooper (played by Kyle MacLachlan) is an FBI agent who arrives in Twin Peaks to investigate the brutal murder of the popular high-school student, Laura Palmer, and falls in love with Twin Peaks and gains a great deal of acceptance within a tight knit community. He displays an array of quirky mannerisms such as giving a 'thumbs up' when satisfied, sage-like sayings, distinct sense of humor, along with his love for a good cherry pie and a "damn fine cup of coffee". One of his most popular habits is recording spoken-word tapes to a mysterious woman called 'Diane' into his dictaphone that he always carries with him, that often contain everyday observations and thoughts on his current case.

Early in season 2, Diane ... The Twin Peaks Tapes of Agent Cooper was released, a cassette-only release performed by Kyle MacLachlan. The tape consisted of newly-recorded Cooper messages to his never-seen assistant, Diane, mixed in with monologues from the original broadcasts. The tape begins with a prologue monologue in which Cooper discusses his pending trip to Twin Peaks, continues with the initial monologue heard in the pilot, and continues to a point after his recovery from being shot.