Today the final part of an historical six-part radio dramatization  about one of history's greatest and beloved conquerors. ..N'Joy 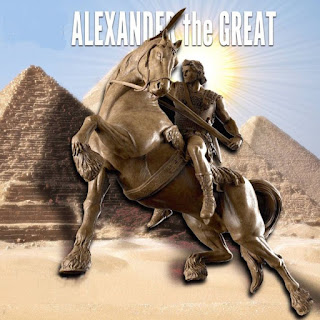 The Macedonian conqueror, Alexander the Great (356-323 B.C.) was incontestably one of the greatest military generals of all time. From the time he sacked Thebes and crossed the Hellespont to his death 11 years later, he conquered the entire Persian empire, including Tyre, Egypt and Babylon, and moved on to the present-day northern India and Afghanistan. Though Alexander made use of the well-oiled army created by his father, he pushed the limits of Macedonian and Greek power to levels even his father, King Philip II of Macedon, could not have dreamed of.

Alexander's conquests paved the way for the spread of Greek culture (facilitating the spread of Christianity centuries later), and removed many of the obstacles that might have prevented the expansion of the Roman Empire. In other words, the world we know today might never have been if not for Alexander's bloody, yet unifying, conquest. Music composed and played by Wilfredo Acosta Directed by Glyn Dearman

With the Panhellenic war of revenge now over, the Thessalians and Greek allies were sent home; since then Alexander was conducting a purely personal war. Alexander's political and ideological views on the empire were changing: He had come to new political idea of two jointly ruling people: Macedonians and Persians. That new politics created opposition and misunderstanding between Alexander and Macedonians.

It is the summer of the year 330 B.C. Alexander, with his fastest troops, chased Darius for 12 days and nights and travelled over 800 km. Meanwhile, Darius troop strength was reduced to 6,000 foot and 3,000 horse. Darius had moved to Bactria, to Bessus - the satrap of Bactria. It was an thrilling chase of king by king, in which each covered the ground by barely credible exertions, past Rhagae (Rai) and the Caspian gates, till early one morning Alexander came in sight of the broken train which still clung to the fallen king.

Great! Now I can binge-listen to the whole series... thanks!