Hello, a millimeter sprint finish saw Greipel bow out to Cavendish even if he raised it hand to victory Cavendish jump took him to his 2nd victory in this year's TdF. No Sagan today but he keeps his yellow, better luck tomorrow. From Wimbledon nothing shocking with the exit of Djokovic everyone expects Andy Murray to pick up the price loot. For the females it looks like it will be a big payday for the Williams 'sisters'.


Today, widely regarded as one of the most respected and sought-after producers in the music world, Brazilian-born Eumir Deodato has racked up 16 platinum records to his credit as artist, arranger or producer with combined sales of well over 25 million records in the USA alone. His discography, including compilations and all his work as arranger, producer and keyboardist, surpasses 450 albums......N'Joy

Born in Rio de Janeiro, Brazil, from Italian and Portuguese origin, Eumir Deodato got his start by playing the accordion at age 12. Shortly thereafter, he started studying piano as well as orchestration, arranging and conducting. Strictly self-taught, he immersed himself in theory books while spending countless evenings sitting behind orchestras and carefully observing how they played. His first break came at age 17 when he arranged and conducted his first recording session for a 28-piece orchestra. It wasn’t long before Deodato became one of the most active and respected arrangers and pianists in Rio's busy music scene, recording for such artists as Milton Nascimento, Marcos Valle, Elis Regina and Antonio Carlos Jobim.

In 1967, Deodato moved to New York and began working with Luiz Bonfa, the legendary composer of “Black Orpheus,” while also doing extensive studio work for Astrud Gilberto, Walter Wanderley, Antonio Carlos Jobim, Marcos Valle and many other Brazilian artists who were living in the Big Apple at the time. When writing the arrangements for Astrud Gilberto's Beach Samba, he became acquainted with producer Creed Taylor, who hired him to arrange for other CTI artists like Wes Montgomery, Ray Bryant, Stanley Turrentine, George Benson, Paul Desmond and Tom Jobim. His reputation in the fields of pop and black music was strengthened by his arrangement work for Frank Sinatra ("Sinatra & Co."), Roberta Flack ("Killing Me Softly,” "Chapter Two,” "Quiet Fire") and Aretha Franklin ("Let Me In Your Life").

Following a performance at the Hollywood Bowl with the CTI All-Stars Band in 1972, Deodato formed his own group. His debut appearance as a leader, billed as "2001 Space Concert,” was held at the Madison Square Garden in New York City in 1973. After seven years of worldwide touring (including Australia, Japan, China, South America, Europe) and eight coast-to-coast tours of the States, Deodato decided to concentrate on studio work once again. Besides highly successful solo albums for the CTI, MCA, Warner And Atlantic labels, his work as a producer/arranger earned him several more laurels. One of his first productions was Kool and The Gang's #1 pop single "Celebration." He followed that success with production work for Earth, Wind & Fire, Michael Franks, Gwen Guthrie, Chuck Mangione, Breakfast Club, The Dazz Band, One Way, Con-Funk-Shun, Pretty Poison, Kevin Rowland (Dexy’s Midnight Runners), White Lion and Brenda K. Starr, for whom he produced the pop hit "I Still Believe" in 1987.

Deodato also had three other multi-platinum albums for Kool & The Gang -- Ladies’ Night, Something Special and As One. In the 90's, Deodato continued to be a vital force on the pop scene through his work with Icelandic singer Bjork. In addition to arranging her last three albums -- 1995’s Post, 1996’s Telegram and 1997’s Homogenic, Deodato produced a highly praised acoustic version of Bjork's Isobel, sub-titled Deodato Mix, which became a club scene favorite. He has also produced material for French singer Clémentine (also touring Japan with her as a special guest in 1994), arranged and produced a top 10 single for Brazilian singer Gal Costa (1996) and has performed as guest conductor with Bjork both in Brazil (1996), and in the States at the Tibetan Freedom Concerts at Downing Stadium (1997). In 1998, Deodato arranged for Brazilian pop acts Titãs ("Vol.

In spite of all of his varied triumphs, honors and distinctions over the years, the multi-talented, and multi-instrumentalist will probably forever be associated with one song -- his funky rendition of Richard Strauss’ classical opus “Also Sprach Zarathustra. That single compelling tune, which first appeared on his 1972 debut album for CTI Prelude, sold five million copies and earned Deodato his first Grammy Award, instantly catapulted him to international stardom and setting a course for his remarkable ongoing journey in music.

Samba Nova Concepcao consists of a fine selection of tunes by mostly Brazilian composers that he covered before he was widely known in America. Unlike in much of the jazz and funk that he recorded from Prelude onward, the listener can hear the Brazilian roots of his musical genius on this recording, both on the keyboards and in his arrangements.Snapping percussion, sweet jazzy organ, and other great instrumentation – all dancing wonderfully together in this early bossa jazz set from Eumir Deodato! The album's got a simple brilliance that's totally great – and a sense of color, tone, and timing that really shows Deodato's skill at arranging – a mode that's sophisticated, but which never fails to groove! The whole thing's quite different than his later famous sides on CTI – and it's proof that even at the start, the maestro had a sound that was unlike anyone else. Players include Tenorio Jr on piano, Jose De Araju Oliveira on tenor, and Jorge Ferreira Da Silva on flute and alto – and titles include "Nana", "Straits Of McClellan", "Amor De Nada", "Garota De Ipanema", "Adriana", and "Samba No Congo". If you are a Deodato fan and don't yet have this outstanding recording in your collection, you should. 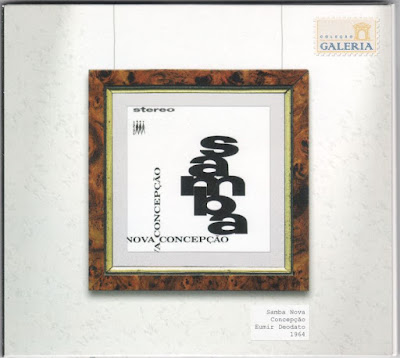 Tremendao is a great album of early Eumir Deodato.Solid arranging and some tasty quick organ licks by eumir that always remain melodically sensitive .One of my favourite tracks is a really swinging version of ,If I had a hammer. definitely worth listening to again and again. 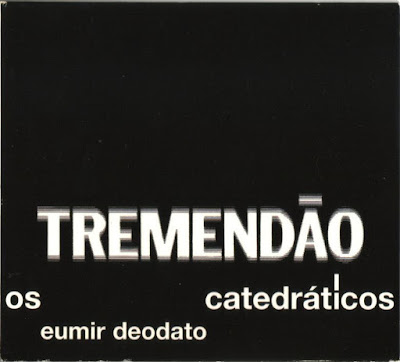 Prior to Prelude, Eumir Deodato was primarily known, if at all, as a tasteful, lyrical, bossa nova-based sometime arranger for the likes of Antonio Carlos Jobim, Frank Sinatra, Wes Montgomery, and others. Enter Creed Taylor, who gave Deodato a chance to step out on his own as a pianist/leader, doing a few tunes of his own plus a healthy quota of CTI-patented jazz interpretations of classical pieces by Richard Strauss ("Also Sprach Zarathustra (2001)"), Debussy ("Prelude to the Afternoon of a Faun"), and bowdlerized Borodin ("Baubles, Bangles and Beads"). Well, "2001" -- a clever, up-tempo Latin-groove takeoff on the opening measures of Strauss' tone poem suddenly exploded and became an improbable hit single. In its wake, Prelude soared to number three on the pop LP charts, and Deodato was propelled out of the arranger-for-hire business. Though overshadowed by "2001," the other tracks also hold up well today, being mostly medium-tempo, sometimes lushly orchestrated, conga-accented affairs that provide velvety showcases for Deodato's lyrical electric piano solos. The record also made a temporary star out of John Tropea, whose electric guitar has a lot of rock & rolling zip and fire, and Hubert Laws, Stanley Clarke, and Marvin Stamm each get a little solo room too. This would be the biggest hit Deodato and CTI ever had, and though short on playing time (32 minutes), it still makes enjoyable listening. 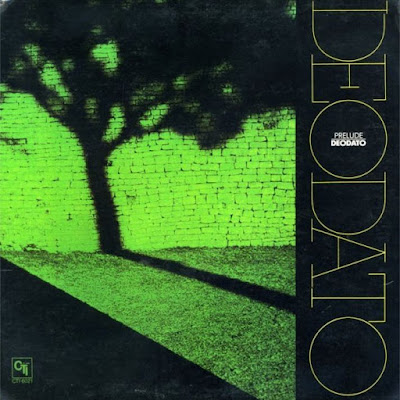 Deodato's debut for CTI, Prelude, earned him a genuine reputation for funky fusion with its groove-tight cover of "Thus Spake Zarathustra," the theme from Stanley Kubrick's 2001: A Space Odyssey. The rest of the album isn't quite as memorable, but it fit the bill and got nice reviews for its innovative read of Borodin and Debussy's "Prelude to the Afternoon of a Faun." On 2, the Brazilian composer and arranger dips into the funked-up fusion formula tank once again, and comes out with a more consistent disc than its predecessor. Arranged, conducted, and keyboarded by Deodato himself instead of CTI house arrangers Don Sebesky or Bob James, the maestro enlisted a fusion who's who of sidemen including drummer Billy Cobham, bassist Stanley Clarke, and flutist Hubert Laws, as well as rockers like John Tropea on guitar. The larger ensemble that provides brass, woodwind, and string support includes trumpeter Jon Faddis and Jim Buffington. "Super Strut" kicks it off. Deep-grooved lines of accented angular riffing and rim-shot syncopation by Cobham turn this simply notated four-stepper into a burning ball of greasy rock and souled-out jazz. This is followed by a wildly campy but nonetheless wondrous read of "Rhapsody in Blue" done Stevie Wonder-style. Deodato's keyboard work never lets the groove drop; he pulls the rhythm section down around him and hunkers his phrasing to punch up the long, sweeping horns and string lines. Less successful is a read of "Nights in White Satin," with its overwrought strings, and a "Pavane for a Dead Princess" that's a snore. The album officially closes with "Skyscrapers," another jazz-rock rave-up that blasts holes in the sonic sky with its dueling keyboard and guitar lines. The remastered version of the CD includes three bonus tracks that include a steamy little bossa nova number, "Latin Flute," with Laws tearing up the solo spot, and a lounge lizard's dream of a cover version in Steely Dan's "Do It Again," with flutes and keys trading the melody lines and Tropea's wah-wah guitars chunking up the backbeat. 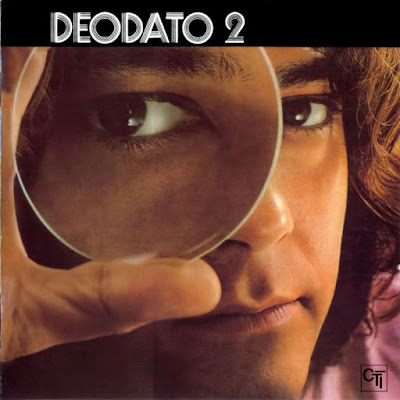 many thanks, great arranger ( and whit other leaders )