Today the 4th part of an historical six-part radio dramatization  about one of history's greatest and beloved conquerors. ..N'Joy 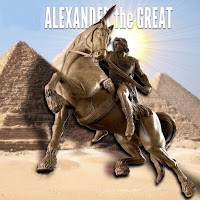 The Macedonian conqueror, Alexander the Great (356-323 B.C.) was incontestably one of the greatest military generals of all time. From the time he sacked Thebes and crossed the Hellespont to his death 11 years later, he conquered the entire Persian empire, including Tyre, Egypt and Babylon, and moved on to the present-day northern India and Afghanistan. Though Alexander made use of the well-oiled army created by his father, he pushed the limits of Macedonian and Greek power to levels even his father, King Philip II of Macedon, could not have dreamed of.

Alexander's conquests paved the way for the spread of Greek culture (facilitating the spread of Christianity centuries later), and removed many of the obstacles that might have prevented the expansion of the Roman Empire. In other words, the world we know today might never have been if not for Alexander's bloody, yet unifying, conquest. Music composed and played by Wilfredo Acosta Directed by Glyn Dearman

Soon after sunrise on the summer's day in the year 336 B.C., King Philip of Macedon is about to enter the great amphitheatre at Ege, the ancient capital of Macedonia, when he's assassinated by his officer Pausanias during the celebration of his daughter's wedding to Olympias' brother, Alexander of Epirus. Alexander was immediately presented to the army as the new king of Macedon. Alexander was not the only pretender to the vacant throne: but, recognised by the army, he soon swept all rivals from his path.

Alexander prepares for his expected invasion of the Persian Empire, previously planned and initiated by Philip.