Hello, as Snowden's revelations still dominate the media > The news that UK was even worse in their efforts to control their populace didn't surprise me as that country has been ruled through an elite system ever since the Normans invaded in 1066, a deeply ingrained class system, that maneged to subdue the people time and again- they give out titles to the biggest traitors, ruthless incompetent generals waisted countless lives and they were honoured for it. Now they gained access to anything their subjects do and say, it will be much easier to exploit them in any way they see fit. That said, now the fight is on now to gain access to the spysystem, in the US the multinationals will undoubtely pay their man inside handsomely to spy on the competition, look for weaknesses. Meanwhile the savy terrorists won't be bothered, there's plenty of ways to evade notice. Interestingly you'll find that skillset all over the security services who will have no problem creating scapegoats for their nasty work. What bright future awaites us .....


Sci-fi fans can prepare themselves for 3 more weeks of Falcon Banner excitement   ... NJoy 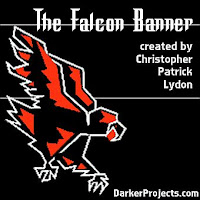 The Falcon Banner
By the twenty-second century, mankind had stretched forth its hand to command the stars. Other races were discovered, and, as the human sphere of influence expanded, they were happy to live in peaceful coexistence, and humanity was on the verge of an evolutionary leap.

The Terran emperor was the first to ascend to the next step of human evolution. His advisors, who now styled themselves holy clerics, sought to force the other races to see the light of their religion. They began to subjugate the other races to the will of the empire. The Amsus, who saw the Empire as decadent, illogical and chaotic, waged war upon it. Admiral VonGrippen, the brightest military mind in centuries, betrayed the empire, and removed the entire home fleet, collapsing the jump gate after them, leaving Earth and the Empire to be squashed under the heel of Amsus oppression.

Now, three hundred years after the fall of the Terran Empire, humans find themselves the subject race, Stagnating on their own world unable to evolve either technologically or otherwise. It is into this oppressive world, that the most unlikely of men are thrust into the roles of heros.

Based on The Falcon Banner, a novel by Christopher Patrick Lydon
Original music composed and performed by Kai Hartwig, Kevin MacLeod and Phil Craigie

08 - The Stuff of Legends and Other Histories, Part 1 55:46 Featuring the voice talents of: